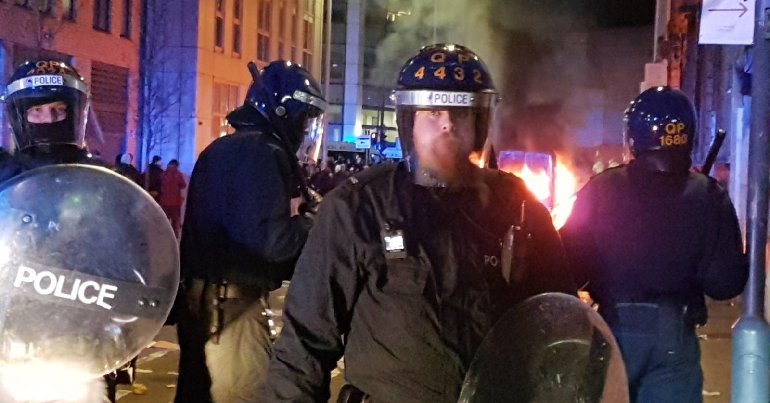 The message from the streets of Bristol on Sunday couldn’t have been clearer. The fight against the Police, Crime, Sentencing and Courts Bill has started. And people are ready to struggle against it tooth and nail.

On Sunday 21 March thousands of people joined a #KillTheBill demonstration in Bristol, part of a weekend of action that saw protests held in many UK cities. By the end of the day in Bristol, at least three police vehicles were on fire, while a hundreds-strong crowd laid siege to a police station.

The protesters have been called a “mob of animals” by Avon & Somerset Police, and ‘thugs’ by Priti Patel. Politicians from Labour and the Green Party were quick to line up to express their condemnation too.

If you’re looking for more condemnation, you won’t find it here. The people who besieged Bridewell Police station were fighting against state violence and authoritarianism, standing up for freedom and for the oppressed. We need to carry on resisting the bill, and standing with those arrested.

Several Canary reporters joined the protests on the streets of Bristol throughout the day. Here’s the real story of what happened on 21 March.

Under the cover of a national health emergency, the Tory government has launched the biggest attack on our freedoms since the Public Order Acts of the ‘80s and ‘90s. The controversial Police, Crime, Sentencing and Courts Bill passed its second reading in parliament last week. The bill will give the police unprecedented draconian powers to arrest protesters, and will criminalise trespass, effectively outlawing the livelihoods of the UK’s Gypsy, Roma and Traveller communities.

The timing of the bill’s passage through parliament is no coincidence, coming during the UK’s strictest ever lockdown where protest is completely banned. The government must have hoped that people’s attention would be on the coronavirus (Covid-19) crisis, and that even if people did notice, they wouldn’t be able to take to the streets. It was wrong.

Footage of police brutalising women at a vigil for Sarah Everard spurred more people to take to the streets against the bill in the days before its second reading. As protests erupted in London and across the UK, the government announced that the bill’s progress through parliament would be delayed. But that didn’t stop people’s anger from spilling onto the streets.

What really happened in Bristol

At 2pm on Sunday 21 March, thousands of people gathered on Bristol’s College Green to protest the bill. They were met straightaway by police officers filming them. Avon & Somerset Police announced later that day that they planned to prosecute people retrospectively. 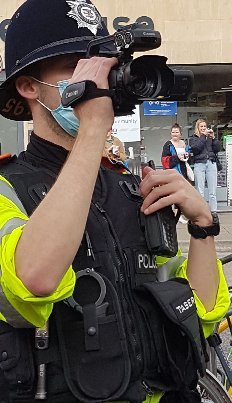 The crowd was the largest seen in Bristol since last June’s Black Lives Matter demonstration, where Bristolians pulled down a statue of Bristol slave trader Edward Colston and threw it in the River Avon. Their action has been widely celebrated in Bristol, but Priti Patel called it “sheer vandalism”. The proposed Police, Crime, Sentencing and Courts Bill includes a clause that makes damaging national monuments punishable by up to ten years in prison.

The march made its way through central Bristol, accompanied by a samba band and sound systems. As the demonstration reached Castle Park at around 4pm, it became apparent that the marchers weren’t going to be willing to be pushed around by the police. Police officers moved in to give warnings to a small group of protesters sitting in the road. The crowd quickly rushed to their aid, seeing the police off with sheer force of numbers. 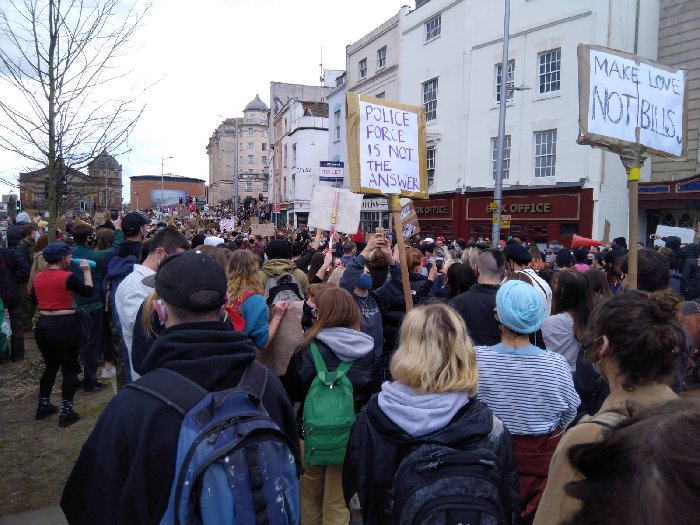 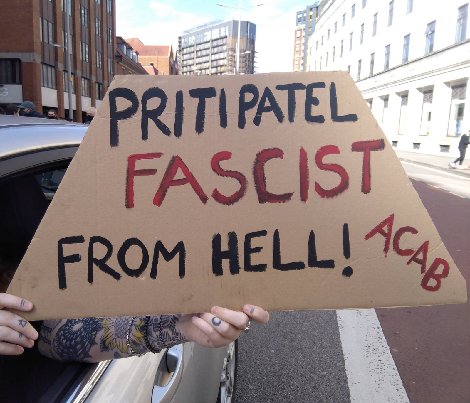 As the evening drew on, police unsuccessfully tried to clear protesters off the streets. According to a statement by Bristol Anarchist Federation:

as things were dying down that police manhandled and attempted to remove a protester who was sitting down. It was after this provocation, at about 6pm that those still up for marching headed down the hill next to the Galleries towards Bristol’s central police station – Bridewell.

When the crowd arrived at the police station, a group of “young” people reportedly sat down outside the station and chanted. According to the report by the Anarchist Federation:

At this point, approaching 6.40pm the police had a choice, line up defensively to protect their station perhaps even pull back a little, or escalate and create a dangerous and increasingly violent situation. They chose the latter, and sent in the dogs, literally in the case of the canine units who would soon deploy, and metaphorically in the case of the human officers who baton charged the crowd, striking at the heads of those standing, kicking folks on the floor, and even hitting a young woman sat on the floor hands raised telling them this was a peaceful protest.

‘I’m not sure what response they expected’

The Canary’s Sophia Purdy-Moore was at the scene. She gave us a similar description of the police attack on the protesters:

I saw police in riot gear hitting protesters round the head with batons. I did also see people at the front throwing bottles at police, but the response seemed disproportionate. The power imbalance felt completely off. At one point it looked as though their horses were going to charge into the crowd of peaceful protesters. The atmosphere was horrendous. There was a real sense of unpredictability and danger in the air after what had been an uplifting day. This all happened while there were still hundreds of people in the crowd (including children), many sitting down shouting: “this is a peaceful protest” in an attempt to de-escalate the situation. It soon became clear that the police were not going to listen. I’m not sure what response they expected.

People are sick and tired of the police acting with impunity. This is what happens when the state refuses to listen to our demands for justice.

A statement from the #KillTheBill coalition points out that:

Ordinary people were charged with police horses, and pepper sprayed

Myself and another of The Canary’s reporters arrived at the scene shortly after the police attack on the crowd. Several people were on the floor, suffering from the effects of pepper spray. The crowd had successfully defended itself against the police charge, even seizing a police riot shield. A police van that had been driven into the crowd had been graffitied. Protesters were occupying part of the Bridewell Police Station building, as well as a nearby car park. The windows of the police station were cracked.

After the demonstration, the police told the media that several of their officers had suffered broken bones and other injuries. We know from past experience that police do exaggerate the injuries sustained by officers. But even if police claims are true, the crowd’s self defence might have prevented greater injuries. Protesters have been killed or sustained brain damage after a police attack on a crowd like the one on Sunday. I personally know several comrades who have suffered broken bones at the hands of the police during protests. 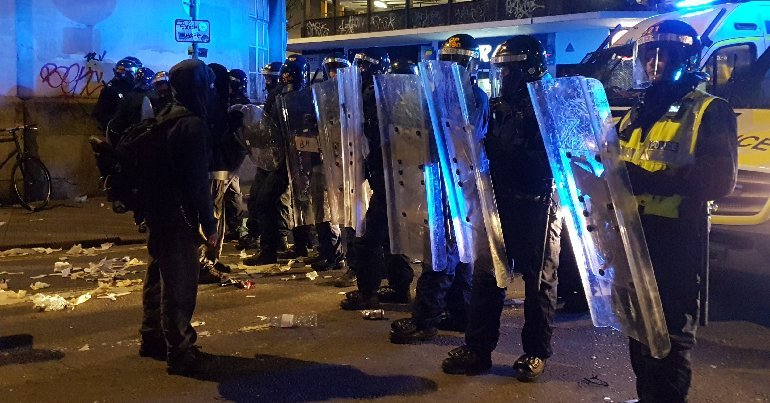 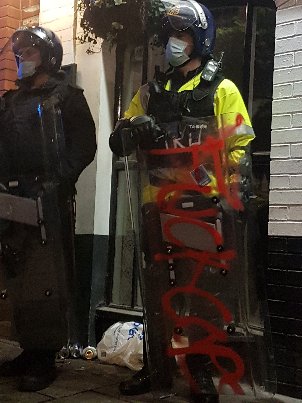 The police drove several more vans into the protest. But the crowd would not be moved from their siege. Eventually, several police vehicles were set alight. One car was emblazoned with the words: ‘Defund the police’. 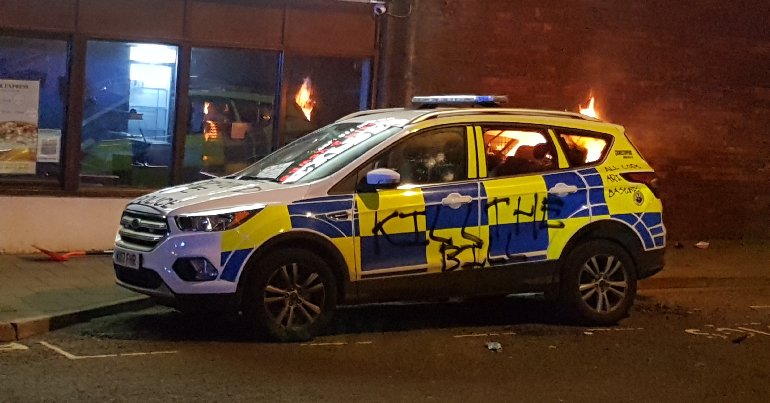 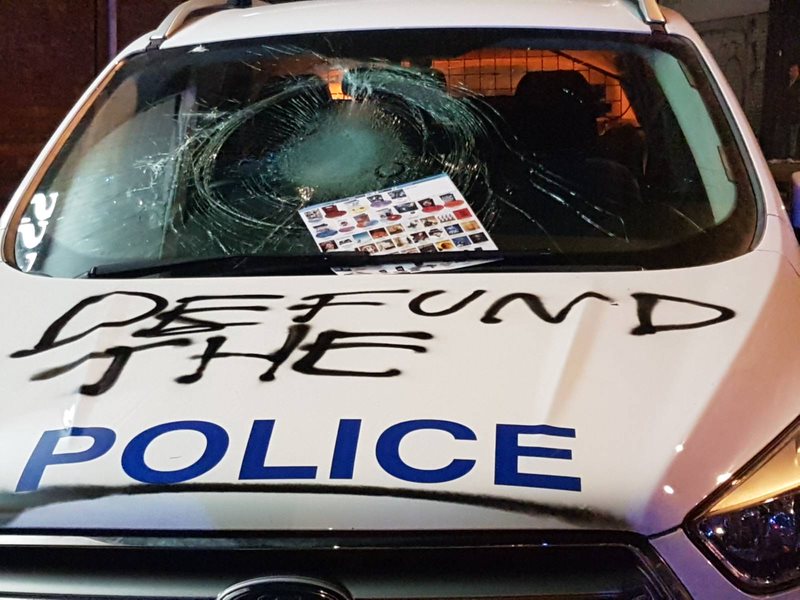 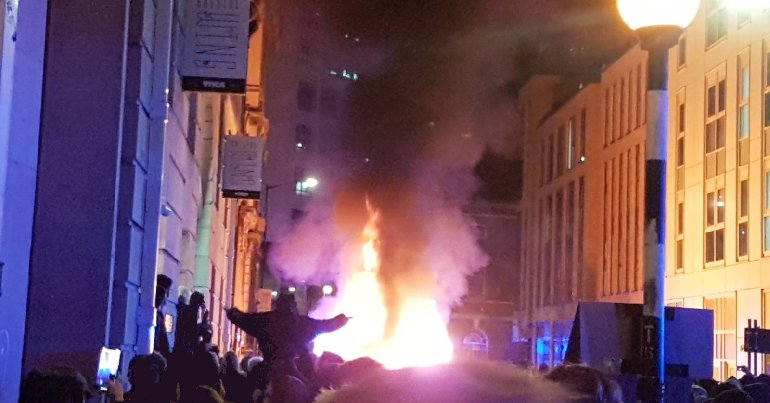 An act of resistance against daily acts of police violence

The siege of Bridewell was an act of resistance against the police violence which is felt daily by communities in the UK. Against the violence routinely faced by protesters. Against police harassment and police killings.

In January, 24-year-old Mohamud Hassan died after being detained at Cardiff Bay police station, not so far away from Bridewell. Five weeks later, 29-year-old Mouayed Bashir also died in police custody, this time in Newport. Police violence is felt disproportionately by People of Colour in the UK. Non-white people are twice as likely to be shot dead by the police, and a Person of Colour is more than twice as likely to be killed in police custody.

Since the killing of Sarah Everard, Sisters Uncut and others have been making efforts to highlight the deaths of women at the hands of the police. A document called #194andcounting shows that at least 194 women have been murdered by the police and prison system in England and Wales, either in state custody or in prison, since the 1970s.

These figures are heartbreaking. But instead of focusing on the suffering caused by police violence, politicians and mainstream media pundits are busy wringing their hands over a few burnt police cars.

The violence faced by people in the UK at the hands of the police on a daily basis is a reminder of how important it is to resist this bill, and to stand with those facing police violence.

So what do those words, carefully inscribed on the bonnet of a burning police car, really mean? The call to ‘defund the police’ became popular last year, following the death of George Floyd at the hands of the US police. According to Kailee Scales of Black Lives Matter:

So a lot of people are asking, ‘well why defund the police, why not police reform?’ So we’ve tried that. We’ve tried police reform over many many years and still it stays the same. We’ve tried to find out different ways to train police, still things stay the same. Still to this day, every year more than a thousand men, women and children are killed by police. It’s out of control.

Defunding the police is the only way to stop pouring resources into a system that does not make us safe.

Right now – in the aftermath of the siege of Bridewell – we need to look at the real story of what happened, and to listen to the voices of those who took part. The mainstream media is reporting that at least seven people have been arrested, so it’s also of paramount importance that we stand with them and offer them support.

We need to remember that if we are going to defeat the Policing Bill, then the struggles of the past week are only the first step. We have a long battle ahead of us. We need to stand strong together, and to organise.