Riot police from all over the southwest of England descended on a protest camp in Bristol on the evening of Tuesday 23 March. It’s difficult to put into words the extreme violence I witnessed, as police attacked, arrested and hospitalised people, and police horses and dogs were used to charge at crowds.

I arrived at the College Green camp in the early evening and joined around 150 people who were protesting what’s possibly the most racist and classist part of the Police, Crime, Sentencing and Courts Bill: criminalising trespass with the intention to reside.

Protesters had set up tents on the green, and for hours people made speeches, talking about how the bill will affect traveller communities and rough sleepers. They sang songs and gave out food to each other. As darkness began to fall, a police helicopter circled overhead, monitoring people as – unbeknownst to us – hundreds of riot cops were about to descend.

The time between the police vans arriving and us being completely surrounded by riot police seemed like seconds. But in reality it was probably a couple of minutes. The police formed a tight line around the green, ready to attack, as people sitting on the ground chanted “peaceful protesters”. A couple more minutes later the police waded in. They ripped up tents, trampled over a vigil for murdered women, and grabbed protesters from the ground, shoving them, kicking them and punching them, while screaming “GET BACK!”

As the police pushed people out of the green, they used police dogs and horses to charge at the crowd. Protesters told me that they were bitten by dogs, and I was informed that a 17-year-old had been hospitalised from a dog bite. I was also told that others were admitted to hospital after being hit on the head by the police’s shields. One woman told me she was hit in her face by a shield; another person’s arm was put in a sling by medics. At least one person was arrested in that initial attack. 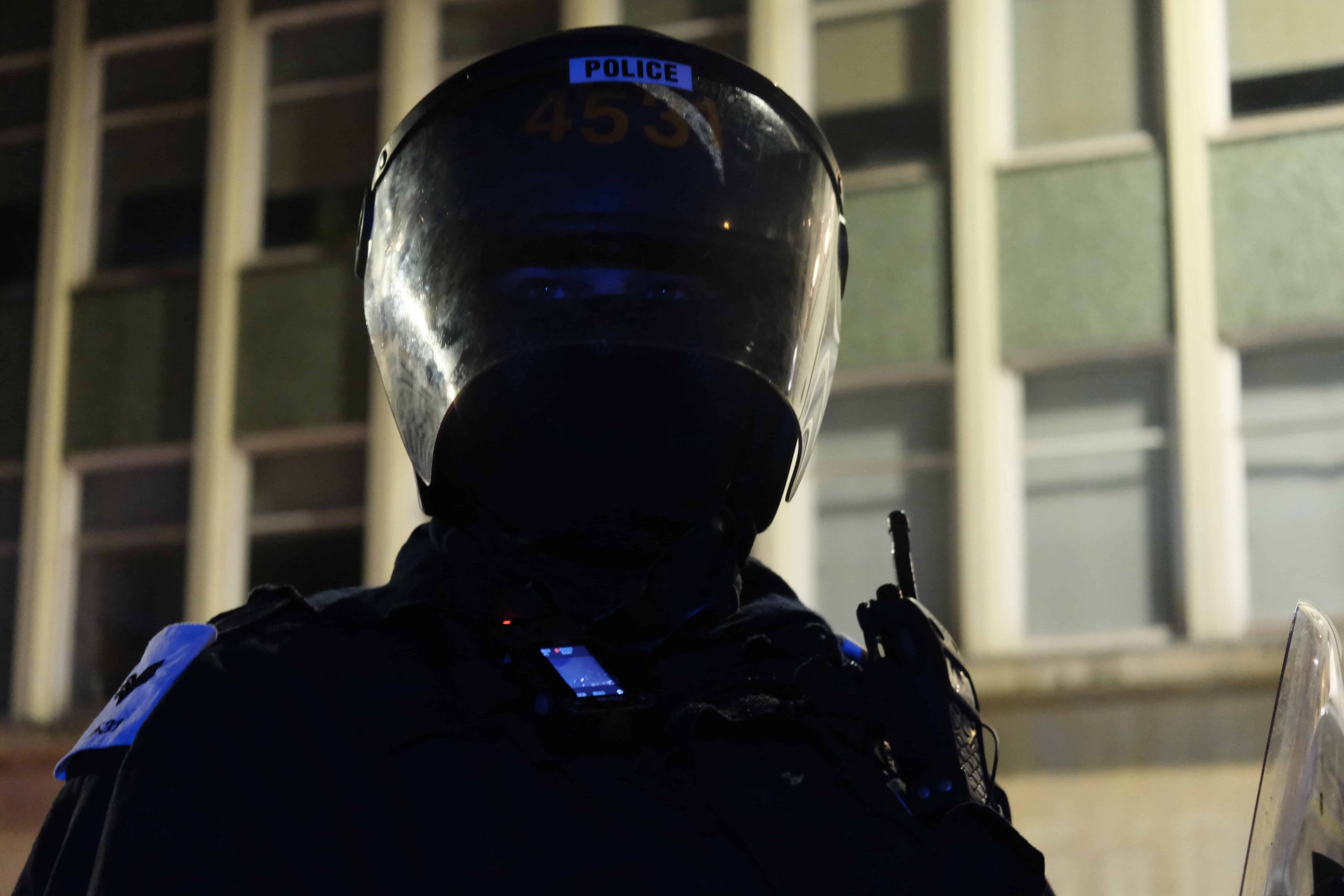 Police violence continued into the night

Through brute force, the police managed to split the protesters into two groups – one on the outskirts of College Green and another down Deanery Road on the opposite side. On the College Green side, police screamed at the crowd “GET AWAY FROM OUR VEHICLES,” yet it was the police who had pushed people back to where the vans were lined up.

People yelled, “this is what a fascist state looks like” and “ten years for a statue, five years for rape”. We watched as people’s belongings were picked up from the centre of the green and shoved into what looked like a council waste truck. There’s no doubt that for some people, these were the only possessions they had.

A couple of hours later I joined the Deanery Road side, to find a few dozen protesters lying down in front of a line of riot police. Again, they were chanting that they were “peaceful protesters”. Three or four riot cops broke into the crowd and bundled on top of one person who was already on the ground. It is this kind of testosterone-fuelled brute force that kills people.

A little while later, police on horses, along with dozens more riot police on foot, lined up behind the front line of cops. As Bob Marley played, the police charged into the crowd, assaulting and arresting more people, taking the total number of arrestees to fourteen.

Back on the College Green side, I witnessed mounted police using their horses to charge at the last remaining protesters.

We should all be outraged

This was the most violent and disgraceful policing I have ever seen in the UK. Yet Avon and Somerset police used social media to congratulate themselves:

Another great effort from our @ASPolice dog teams tonight in Bristol and another long shift for them all.
Thanks to our @BTPDogs colleagues for their assistance also.
All dogs and handlers now going off duty along with all the dogs who are safe and well 🐾

Quite why the police used such disgraceful force on what was a beautiful gathering is beyond me. Maybe the events of Sunday 21 March embarrassed them so much that they wanted to show the world what they’re capable of.

It’s disappointing that officers needed to take this action on a day we should be remembering all those who’ve lost their lives to COVID-19 over the past year.

The communities of Bristol have made too many sacrifices and worked so hard to defeat this virus, it’s unacceptable for people to insult their efforts in this way.

It was inevitable that they would use coronavirus (Covid-19) regulations to justify their brutality. And yet if it’s all about coronavirus, why haven’t we seen this level of force at non-political gatherings like football celebrations? Meanwhile, research has shown the BLM protests last year didn’t cause a spike in coronavirus cases.

And do they really expect people to shut up and stay at home as the country descends into totalitarianism? Why not blame the government for trying to slip through bills which take away our last remnants of freedom?

Footage taken at the time – and there was a lot of it – will show the police up for what they really are. Surely now, even liberals won’t be able to claim that the police are there to ‘facilitate peaceful protest’.

And when the Police, Crime, Sentencing and Courts Bill passes, these brutes will get even more power. It doesn’t bear thinking about.