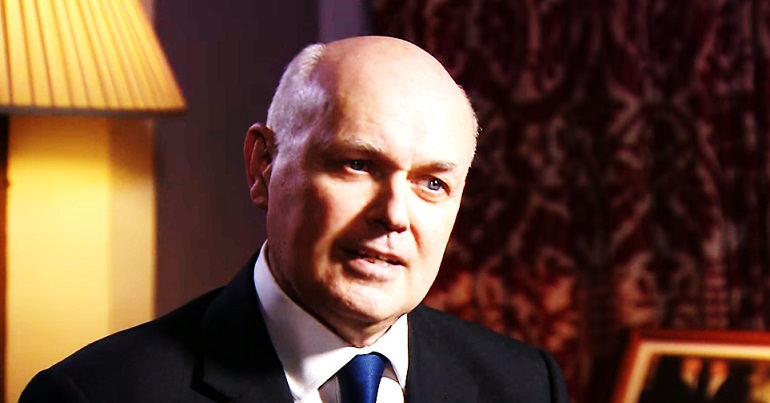 Iain Duncan Smith (IDS) has waded into the Batley grammar school story. And his views have exposed the hypocrisy at the heart of the Tory Party. Moreover, IDS has again shown the creep of authoritarian intolerance in the UK establishment.

BBC News has reported on the situation at Batley grammar school in West Yorkshire. It involves a teacher who used an image of the Prophet Muhammad in a lesson. The cartoon was reportedly by French satirical magazine Charlie Hebdo. But as BBC News pointed out, this goes against the Qur’an. Batley school has a large Muslim cohort, so some parents are angry. The school has suspended the teacher in question. But as BBC News wrote:

Demonstrators gathered outside the school for a second day on Thursday morning, but had moved on by mid-afternoon.

The school… was understood to have switched to a day of remote learning and the gates remained locked.

On Friday 26 March, Julia Hartley-Brewer spoke to him on talkRADIO. She asked his opinion on the story. IDS said:

After a teacher was suspended for showing an image of the Prophet Mohammed to pupils, Sir Iain Duncan Smith says: "If we ban everything that different groups don't like it's going to be very difficult for teachers to teach."@JuliaHB1 | @MPIainDS pic.twitter.com/6uFMU4QQOC

IDS’s comments were similar to that of minister Robert Jenrick. He said that teachers should be allowed to “appropriately show images of the prophet”. Also, he added that:

Do as we say

But as the Guardian reported, the Tories have set rules as to what teachers can teach in school. It wrote that:

Department for Education (DfE) guidance… [on[ the relationship, sex and health curriculum categorised anti-capitalism as an “extreme political stance” and equated it with opposition to freedom of speech, antisemitism and endorsement of illegal activity.

So, it seems that teachers have a free reign to teach. But as long as it’s things the Tories believe in.

In the case of Batley, this is a clear anti-Islam narrative, where people are not respecting Muslim’s views. You can imagine that if teachers were pushing work that was disrespectful to Christianity, the Tory response would probably be very different. But just as importantly, let’s not forget we also have a massive bigot sitting in 10 Downing Street.

The Tory Party readily uses liberal arguments around ‘free speech’ when it suits them. But in reality, the party is creeping further to the authoritarian right. Its failure to properly defend the Muslim children in Batley grammar school has let the party’s mask slip. The hypocrisy is staggering. But it’s also another warning sign of the UK’s descent into what I previously explained is corporate fascism. This path should worry us all.