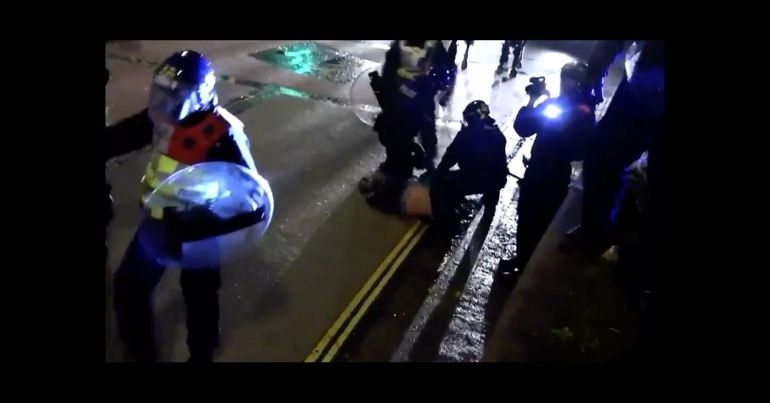 On 26 March, protesters gathered in Bristol to peacefully demonstrate against the Tory government’s draconian Police, Crime, Sentencing and Courts Bill. The protest came after “violent and disgraceful policing” at previous ‘Kill the Bill’ protests.

Although Avon and Somerset police have retracted claims that officers sustained broken bones while dispersing crowds at the 21 March protest, government officials such as prime minister Boris Johnson and home secretary Priti Patel continue to blame protestors for the violence in Bristol – as have the mainstream media and commentators. Now, however, people have released footage from the latest protest that should dismiss all doubts over police violence.

Bristol Cable editor Alon Aviram shared a video of protesters shouting “we are peaceful, what are you”, while police in riot gear brutally hit a defenceless demonstrator to the ground. He noted that this was the moment the peaceful sitting protest descended into violence:

This went from a sitting protest into this in no time pic.twitter.com/SGkeXoRQS2

Chris Rossdale, who watched the protest on a livestream, said that he was “utterly sickened” by the police brutality he witnessed:

I sat and watched the live stream. People were sitting in lines in front of the police, holding up their hands and chanting. An officer gave a signal, and the police charged. They beat those who didn't get out of their way.

Utterly sickened. Don't let them 'both sides' this.

Griff Ferris shared videos of police charging peaceful protestors – and hitting them with batons. Police even hit protesters who had their hands in the air:

Just before the dogs came – police hitting people with batons and shields, many with their hands up in the air pic.twitter.com/iROYuvYBNf

And Michael Volpe circulated a video of police using their riot shields to strike sitting protesters:

Taking careful aim. Savagery and a deliberate attempt to cause serious bodily harm. These officers will be hailed as brave in the morning by their boss. This needs to be seen and shared. pic.twitter.com/DeeyeCMWvg

Meanwhile, Cassi Perry noted that this use of a riot shield is “unlawful”:

“Blading” with a shield is an unlawful use of a defensive tool, and covered in all public order training.

This technique is being widely in the Bristol protests on sitting protesters.

I will be interested to see the official responses to this today? https://t.co/aK3x2CQdSY

Another user said, “this is the type of police brutality that the protests are about”:

#KillTheBill protest in #Bristol tonight. At least two police officers are using the large riot shields in a new way this evening, chopping down with them on the limbs of protesters who are already on the ground. This is the type of police brutality that the protests are about. https://t.co/gnvPydI6x5

Make this video trend. How is this lawful use of police powers in any circumstance? The only ones inciting violence and hypocrisy are the police – a fascist pawn of the govt to keep society in line with only one group’s values – the Tories. #KilltheBill #PritiPatel #PritiUseless pic.twitter.com/cmZyLYcGMG

Responding to the home secretary’s statement calling protestors a “criminal minority”, James Felton shared a video of police in riot gear hitting a woman in the face:

Sure, such as this woman violently hitting a police club with her face?pic.twitter.com/pIYImoEtm3

Afshin Rattansi shared a video of police chasing protestors with dogs, suggesting that this is what the future of peaceful protest will look like if the draconian bill goes ahead:

Another user shared this announcement, concluding “we live in a fascist state”:

For those who don't know what's been happening at the #BristolProtests, the police have basically been battering the shit out of people again for no reason. It's time to face reality, Britain, we live in a fascist state. #KillTheBill

What about freedom of the press?

Journalist Matthew Dresch shared a video of police assaulting him at the protest:

Police assaulted me at the Bristol protest even though I told them I was from the press. I was respectfully observing what was happening and posed no threat to any of the officers. I have muted the latter part of the video to spare you all the pain of hearing my shrill voice. pic.twitter.com/a7a0Nnw0bG

Meanwhile, police “tricked” an independent journalist into an arrest:

An independent journalist has just been tricked into being arrested while filming the #KillTheBill #BristolProtests because the media giants won’t cover the full story. What happened to #freedomofthepress??! pic.twitter.com/ifSjAVrtlA

Concluding that Avon & Somerset Police “are out of control”, Ash Sarkar summarised the events on 26 March, saying:

Police in Bristol lied to the public about the extent of injuries last Sunday (no broken arm, no punctured lung). And now it seems that they spent last night beating up protestors and journalists as soon as it got dark. @ASPolice are out of control.

All Black Lives UK suggested the police had been using “army tactics”:

Apparently the bristol police have been using army tactics tonight….

And Tom Scott highlighted the following:

These same police will be giving evidence against people arrested at the #BristolProtests. Juries will have reason to regard this with some scepticism.https://t.co/rlaIf3nMe8

One Twitter user highlighted that the police are responsible for the violence we’ve seen in Bristol this week:

the police initiated the violence today. and on tuesday, and on sunday. like they did at the poll tax protests, like they always have and always will. #killthebill #acab

Organisations denounced the police brutality many witnessed at the protest and shared messages of solidarity with protesters. Black Lives Matter UK said:

It has been horrific to witness the extremity of police violence in Bristol last night! We want to send our solidarity to all protestors who have faced the cruel, inhumane and senseless violence of this police state. We stand with you! #BristolProtests#KillTheBill

Protest is a right not a privilege.

Heavy-handed policing and further restrictions in the #PoliceCrackdownBill are a threat to that right.

Calling the UK “a police state”, All Black Lives said:

Offering legal support for anyone affected by the brutal policing of the protest, Black Protest Legal Support said:

Our Legal Observers in #Bristol last night reported repeated mounted & riot police charges + attack dogs on rotation. Monitoring events on the ground is vital to holding the police to account. Email us if you need legal support/rep, esp any Black or racialised protesters affected

And the Network for Police Monitoring (Netpol) shared:

This footage of police violence has given us a vignette into what the policing of peaceful protests will continue to look like if the Police, Crime, Sentencing and Courts Bill is passed.

If you’re taking to the streets in solidarity with traveller communities and rough sleepers, and to fight for our right to protest, be sure to follow Green and Black Cross’s advice. If you don’t feel comfortable taking to the streets, you can still support the cause by signing petitions by Netpol and Liberty calling on the home secretary and justice secretary to scrap the draconian bill.

Finally, you can support grassroots organisations that carry out vital police monitoring work such as Bristol Copwatch and Bristol Defendant Solidarity.