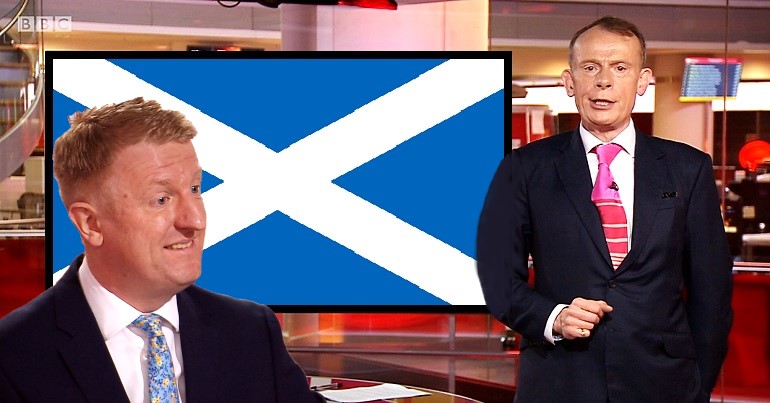 A Tory minister’s assertion about the current state of the “union” was a low moment. This was even by the Andrew Marr Show‘s usual standards. Because he managed to insult the intelligence of every person living in Scotland.

The ‘united’ bit of the United Kingdom has been hitting the headlines again. Former Scottish first minister Alex Salmond has started his own pro-independence party. In Wales, Plaid Cymru has been pushing Welsh independence. And in recent months in the north of Ireland, polls have shown a majority support for a vote on reunification. So, enter culture secretary Oliver Dowden on Marr to lay waste to the idea of national self-determination.

The host put it to him that Welsh first minister Mark Drakeford said:

the Union is… under greater threat than at any time in his life. Do you agree with that?

Oliver Dowden gets asked to comment on a comment made by Mark Drakeford on the “threat” to the Union – and starts banging on about Scottish independence. Did he realize Drakeford is Welsh FM? #Marr

Either Dowden doesn’t realise that Drakeford is a Welsh politician, or he thinks that only Scottish independence is an issue. But it certainly isn’t just in Scotland where self-determination is looking more likely. Because a recent ITV poll found 40% of Welsh people supported their nation’s independence.

Either way, Dowden continued on Marr with his union clusterfucking.

Was there a Scottish Indyref?

He then said about the “choice” in May’s elections:

do we get on with the job… of defeating Covid… Or do we get caught up in yet more constitutional wrangling, when we thought we’d addressed this four or five year ago, back in… in fact it’s more than that now isn’t it, seven years ago when we had the referendum

Good to see that Scottish politics is so emblazoned on Dowden’s mind that he knows when the first Indyref was. It’s actually around six and a half years since it happened.

Dowden’s confusion also applied to the broader situation in Scotland.

He continued his drivel on Marr by saying:

Things haven’t changed since then.

Yeah, many people would disagree with that:

@OliverDowden on #Marr nothing has changed since 2014!

Really ?? Did he not notice #Brexit #InternalMarketBill

Honestly if your going to speak about Scotland on national TV get yourself clued up first!

And then Dowden says "Things haven't changed" since the Scottish referendum, except for Covid.

Excepting, of course, for Brexit, which Scotland didn't vote for.

#marr @OliverDowden On the union…”things haven’t changed since then “…..except a bunch of conmen and racists dragged us out of the EU, put a border in the Irish Sea, crashed the fishing industry, trashed exports….. you meant apart from that I guess ?

So, what does Dowden think has changed since 2014? He told Marr:

Covid. And it’s important that we get on with dealing with that.

Marr asked him again if he thought the union was under threat. Dowden gave a flicker of Tory reality with his answer:

I think there is a real risk here. And the way to deal with that risk is to make sure that you vote for the Conservative Party and unionist parties that are committed to ensuring that our precious union… should be preserved

‘My precious’ sums up the Tories’ attitude to the union. That is, they think Scotland, Wales, and the north of Ireland belong exclusively to them – and no one else should be in control. But when Dowden can’t even get his basic facts right on the situation north of the border, live on Marr, it actually reveals the Tories’ contempt for the other nations.