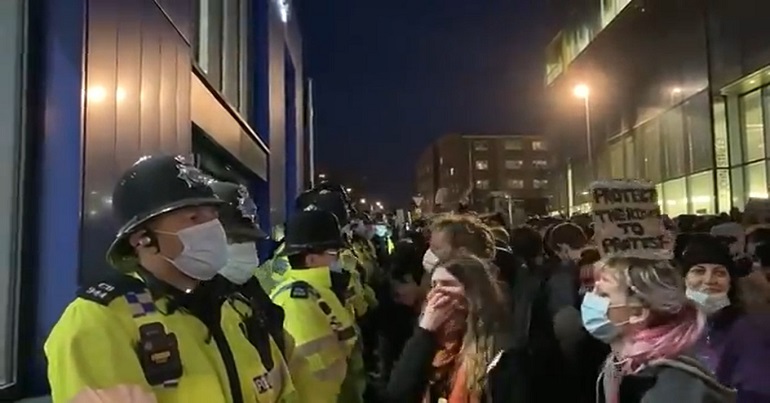 On 21 March, thousands of people took to the streets of Bristol to protest against the Tory Police, Crime, Sentencing and Courts Bill. The Canary was there on the ground and gave the protests extensive coverage. The protests continued for days afterwards.

And even though people protested peacefully in Bristol, they were met with some of the most disgusting examples of police brutality and violence ever witnessed in the UK. But despite police violence, people aren’t put off exercising their right to protest.

Because on 26 and 27 March, protesters came onto the streets of England and Wales again to try and ‘Kill the Bill’. Ordinary people are standing up to the Tories and their draconian legislation. And there will be no end until it’s overturned.

Taking it to the police

This weekend’s protests again appear to have been largely peaceful. Protesters marched through city centres, protested outside police stations, and peacefully occupied parts of the city. With all the protesters, the message was clear:

"This is what democracy looks like!"
Follow our live coverage of the #killthebill protest in Sheffield at @yorkshirelive @gilder_sam https://t.co/DOKe1Ms6FV

Yesterday I went to a completely peaceful kill the bill protest in Sheffield. Why was it peaceful? No police presence. https://t.co/6FsOb6NtO6

I don’t watch tv but I was wondering if there’d been anything on the news about the kill the Bill protest in Manchester yesterday? All Manchester Evening News said yesterday was “Over 150 protesters” – so could be anything from 151 to 10,000 lol pic.twitter.com/k6r2tbUc9a

Organisers of this weekend’s protests showed solidarity with Bristol:

reminder that there are kill the bill protests in manchester today and next friday!!! we stand in solidarity with everyone in bristol ❤✊ pic.twitter.com/1u59SIZrST

Protest for as long as necessary

Independent media outlets like The Canary will continue to give these protests the coverage they need. Because the mainstream simply can’t be trusted:

This is mainstream media bias in action. Cops attacked peaceful protesters last night in Bristol in a shocking act of violence and revenge. But this is the BBC headline. This is not neutral reporting. This is a cover-up of what happened and a police force out of control. pic.twitter.com/PtCOZqsu7f

As long as Tories persist with authoritarian legislation, ordinary people will face it down.