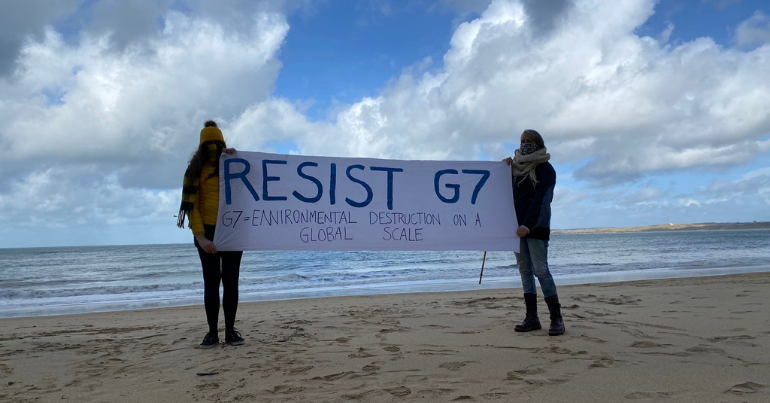 A hotel in Cornwall hosting the G7 in June has cut down trees amid work to build new meeting rooms, prompting backlash from campaigners.

The work began at Carbis Bay Hotel without planning permission. However, the council will not make a decision on the retrospective application until after the G7 and work is continuing at the hotel.

Environmental campaigners and councillors have condemned the hotel, which calls itself “one of the UK’s best and greenest destinations”, for destroying “historic woodland”, and called for clarity on the situation.

Local people first expressed their anger over trees being cut down in early March.

You don’t get eco systems like this, habitats which are mature trees next to the sea and once these trees have gone you can’t replace them with young saplings, old mature trees like this sink so much more carbon.

You can’t replace a tree that’s a few hundred years old with a sapling because it just doesn’t have the same effect.

We really want answers on this development, I would like the owners of the hotel to let us know what’s going on.

The hotel denied it had cut down ancient woodland or damaged badger sets:

We appreciate that our passion and commitment to the environment are shared by many, and would like to address the misunderstanding on social media, and reassure our guests and neighbours about the area that we are working on at the moment.

Part of our long-standing plans for the estate included clearing a small self-seeded scrubland area to the side of the hotel, and work on this area started several years ago. We can confirm this was not ancient woodland and there are no badger sets on this piece of land.

We are working closely with a local landscaping team to increase planting in this area replacing the scrubland with a plethora of trees and plants more suited to the coastal environment.

The development work at the hotel is ongoing to build meeting rooms for the G7. The hotel started work without planning permission, leading to the council being asked to investigate the development.

The council denied planning permission to the hotel to build eco lodges in 2018.

Work is still going ahead, with the planning authority due to consider the hotel’s application after the G7 Summit in June.

I spoke to the chairs of the council’s environment and planning committees and there is very little that can be done to stop Carbis Bay Hotel from destroying the landscape down there as it’s on their own land.

I think it’s a disgrace that this summit which is meant to be looking at the effects of climate change and the environment is being organised and hosted by people who obviously don’t give a damn about either.

There have been several protests against the hotel’s actions. The Resist G7 Coalition said:

The destruction of the cliff area at Carbis Bay has been done to accommodate the G7 meeting in June this year. It is a microcosm of the disregard for the environment shown by our leaders.

The irony that world leaders plan to fly across the world to meet at a hotel which has ripped a scar across the natural environment, in order to discuss how to save the planet, can be lost on no one.

At the G7 Summit, world leaders will discuss how to tackle the climate crisis.

The Resist G7 Coalition is bringing together a diverse range of groups to take action against the summit:

The Resist G7 Coalition is made up of local, national and international groups who’ve come together to build resistance and positive alternatives to the G7. This isn’t about opposing one summit. It’s about building on and creating a legacy, of showing what’s possible when diverse groups come together and start organising the world we want to see. We believe in a world where we put people and planet before profit, where justice means justice on a global scale, where wealth is shared equally and not pocketed by the 1%. Our world should not be a play thing for the rich. It belongs to all of us. And it’s down to us, the people, to stand together, to resist, and to create the future we want to see. The world leaders at the G7 aren’t going to do it for us. The system needs changing. And if we want change, we have to act.

Resist G7 will hold international days of action while the G7 is going on to show their opposition. It said:

The G7 symbolise inequality and putting profits before people and the environment.
Another world is possible if we unite together.