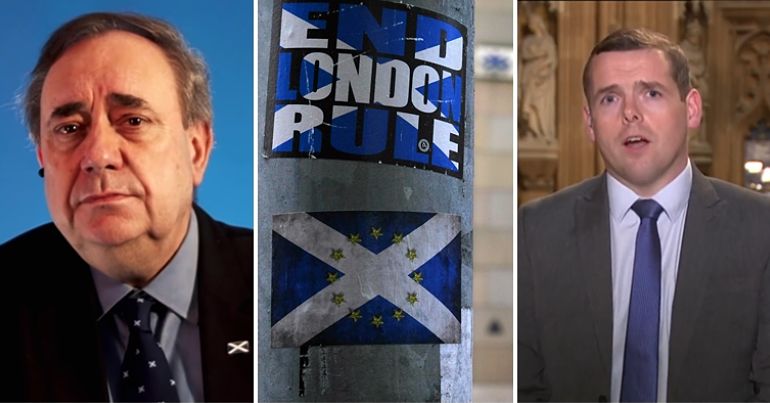 On 26 March, Alex Salmond publicly launched “a new political force – the Alba Party”. Salmond said his new political party will only stand candidates on the regional list in parliament elections on 6 May. And given Scotland’s election system, that strategy could achieve a “supermajority for independence”.

Following Salmond’s announcement, Scottish Tory leader Douglas Ross called for a pact with unionist parties to form a “pro-UK, anti-referendum coalition” after the elections. But that call seems to be falling on deaf ears.

So try as the Tories and other unionists might to undermine the campaign for independence, there’s no sign it’ll have any effect. This article is part of The Canary‘s #Independence2021 series in the run up to May’s elections.

Alba is “seeking to build a supermajority for independence in the Scottish parliament”. In doing so, it expects to field “a minimum of four candidates in each regional list”. Salmond is standing in the North East region. He also believes this strategy could lead to as many as 90 pro-independence MSPs after the election.

And Alba already has two MPs, because candidates include defections from the SNP.

In November 2020, The Canary reported that Action for Independence (AFI) intended to stand in the list only system. The party also aimed to boost the independence vote. But because of Salmond’s announcement, AFI announced it will “stand down its 42 candidates in the forthcoming election”. And in what could be an endorsement of Alba, it said:

AFI is gratified that its concept of Max The Yes and the building of a supermajority of independence supporting MSPs has been taken up by such a highly credible party with such influential leadership.

Leader of Scottish Labour Anas Sarwar rejected Ross’s call for a pact. He told Ross to “grow up” and put “people’s lives front and centre in this election campaign”.

And just as Ross’s attempt at unity was falling on its face, yet another Tory scandal – they appear to be never ending.

Because days after Ross’s call, Jennifer Arcuri revealed details of her affair with Boris Johnson. These revelations could impact the Greater London Authority’s probe into Johnson’s conduct when he was London mayor.

As previously reported in The Canary, voters in Scotland have two votes. With their first vote, they elect one MSP from each of the 73 constituencies. These 73 MSPs are elected on a ‘first past the post’ basis, where voters put an X beside their preferred candidate. This is just like the voting system used in Westminster elections. Then with their second vote, they elect the 56 additional MSPs through the ‘additional member system’ (AMS).

For AMS, Scotland is also divided into eight parliamentary regions. Each region elects seven MSPs. These 56 regional MSPs are also called ‘list MSPs’. On the AMS, Scottish voters choose a political party, as opposed to their preferred candidate. Or they can also choose an independent candidate. These MSPs are then selected from lists compiled in advance by the parties.

What else would they… could they do?

It was obvious Salmond’s announcement would provoke a unionist reaction. But if his regional list strategy pays off, those reactions are in vain. This renders the unionist cause in the new parliament utterly hopeless.