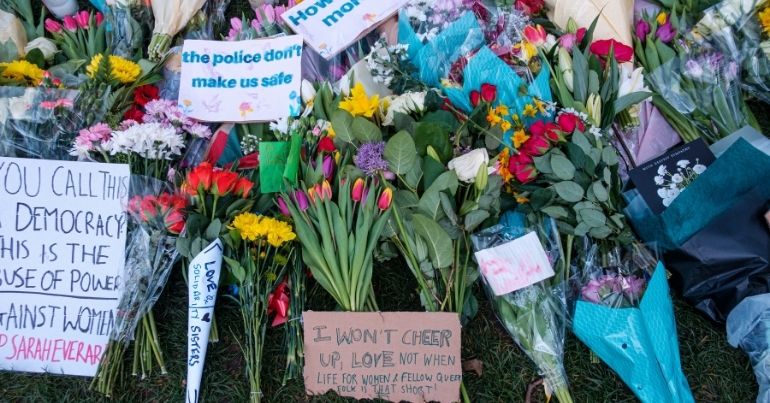 On 22 March, a group of “squatters and autonomous activists” took to Instagram to share the news that they’ve occupied the former Clapham Common police station. The occupation is to oppose the Tory government’s draconian Police, Crime, Sentencing and Courts Bill. The group is also calling for “the end of the femicide recently highlighted by the murder of Sarah Everard by a serving Met police officer”.

in London, activists have opened a #KillTheBill squat in the disused Cavendish Road police station in Clapham, which is situated yards from the last place that #SarahEverard was seen alive.
Hundreds sit down outside #Bristol police station https://t.co/gOCFNiv5yZ

We demand the withdrawal of ‘The Police, Crime, Sentencing and Courts Bill,’ an end to male violence, a defunding of police and a refunding of communities. We have shouted, we have marched and we now stand as a coalition to resist this authoritarian state.

26-03-21 group of left-wing activists calling themselves the Serious Annoyance have occupied an abandoned police station in the London borough of Clapham on Friday close to where Sarah Everard was murdered in order to protest the new proposed policing bill by the UK government. pic.twitter.com/LODwIvilAz

PROTESTS ARE NECESSARILY DISRUPTIVE, but proposed changes to the law make it an offence to cause ‘serious annoyance’ or ‘inconvenience’, effectively allowing the police to criminalise any public protest. THIS IS A BREACH OF HUMAN RIGHTS AND A GREAT THREAT TO POSITIVE CHANGE.

The group went on to highlight Section 4 of the bill, which targets traveller communities and rough sleepers. And it came out in support of the Network for Police Monitoring’s (Netpol) Charter for Freedom of Assembly Rights.

Not backing down without a fight

Following days of police intimidation, the group took to Instagram to share an update. It said the court has granted an eviction order and expects bailiffs and police to arrive at any moment. Setting out the intention to stand their ground, the group said:

We refuse to give in to their attempts at intimidation as they seek to crush our protest. The state knows that the majority of people stand against this authoritarian bill seeking to criminalise protest and trespass. They know that we will not stand for this assault on our lives, so we will continue to fight it as long as we stand.

The only response they have is to escalate their intimidation, escalate their violence against us, to try and crush this growing, decentralised movement of people against the Bill.

The group is now calling on its supporters to be prepared to show solidarity when the bailiffs arrive. It’s evident that the group will not back down without a fight. Supporters can follow (at)not.a.cop.shop for the latest updates on the situation. Those keen to join the movement can find the occupiers at 47 Cavendish Road, Clapham Common, London, SW12 0BL.