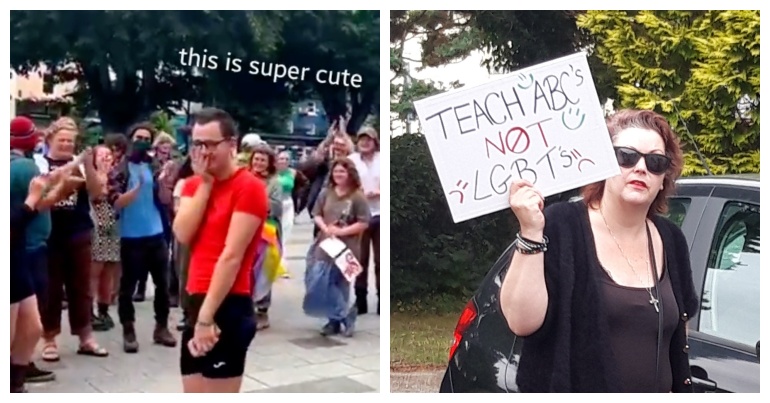 This article includes a mention of suicide and self-harm

Drag Queen Story Hour is taking place at my local library. It isn’t an event that should need an anti-fascist presence. It should just be kids going to enjoy stories in a library. It’s a bit of a no brainer. I spoke to a friend last week, and we were both incredulous that we’d got to this point in the culture wars – that this is where battle lines were being drawn – over reading stories to kids at libraries.

I wasn’t really expecting Patriotic Alternative (PA) to turn up in my home town. I was planning to walk down to my local library for an hour and then go home. But after seeing their hate five minutes from my house, we decided we couldn’t abandon the rest of Cornwall and so a group of us spent three days travelling around libraries to ensure we were providing an alternative to their vile rhetoric.

Fascism on our streets

PA is a fascist group. Let’s call it what it is. It’s a group that promotes “indigenous rights” for white people. Its website proudly carries posts proclaiming “migrants not welcome” and its stated aim is to:

raise awareness of issues such as the demographic decline of native Britons in the United Kingdom, the environmental impact of mass immigration and the indoctrination and political bias taking place in British schools.

Time and again the police tell us that they want to facilitate both sides, that everyone has a right to express their views, that they are neutral. But that says it all. Staying neutral in the face of fascism is not an option. It puts everyone at risk.

The group in Cornwall pretends not to be associated with PA. But they hand out the group’s leaflets and are happy standing next to people who actually say they are fascists. One man does a Sieg Heil and is ignored by the cops and his fellow protesters. They say they’re intimidated and harassed by us. They call us “Antifa” as if it’s an insult. I tell them I’m proud to be anti-fascist. They say they feel threatened. And they do seem to have a thoroughly miserable time as we dance round them with our colourful flags and block their hateful banners.

Aida H Dee is reading stories to kids. These are stories that give children a positive alternative and that stand up to bullying. He also wants to ensure children receive a positive message about being part of the LGBTQI+ community. This is important. Because as the Drag Queen Story Hour website states:

Drag Queen Story Hour is attempting to change this in the best possible way:

The children at the libraries certainly agree. They roar with laughter, and both the kids and parents are full of smiles and praise when they leave. Aida H Dee is doing an amazing thing, and is, at times, paying a terrible price for doing it.

Moments of joy and beauty in dark times

While it’s sad that we had to come out on the streets to counter the hate, there were moments of joy and beauty that will stick with me forever:

And whether it was the security guard who after the first event decided to volunteer his time and go for 36 hours without sleep to help, the amazing library staff, locals chasing fascists off the streets, or the parents who were so happy to see us there, there were many moments of joy and lightness in these horrid times.

As a statement from the local group who were at the libraries says:

Communities across Cornwall made it clear that this hate does not represent us. We are both from the LGBTQ+ community and stand in solidarity with the LGBQT+ community. Cornwall has said it loud and clear – we are anti-fascist and proud.

The chants of “Cornwall is anti-fascist” on the streets of Launceston as the last of the haters skulked away on Wednesday still ring in my ears. There is no place for hate in Cornwall and those that tried to perpetrate this message were firmly told they were not welcome here. And while this is just one battle in a much bigger fight, it’s a battle we definitely won, and I’m so proud of my community for its response.

Featured image via Twitter screen grab and author’s own