The 'Enough is Enough' campaign wants everyone to get involved - Canary 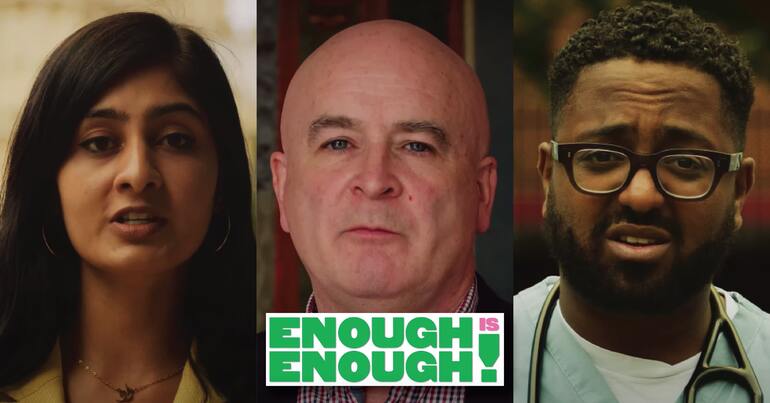 Campaign group Enough is Enough is set to hold a ‘major launch event’ on Wednesday 17 August. The group was set up in response to the prolonged and continuing decline of living standards in modern Britain.

Meanwhile, many others are pointing out the inequality in Britain – among them writer Taj Ali:

Energy bills are set to soar to over £5000 next year meanwhile:

It's not a money problem; it's a corporate greed problem.

The group’s plan is to use the event to “kick off a series of 50 rallies across Britain”. Their Clapham-based launch event will be headlined by the following figures, with more set to be announced:

At least one Twitter user has suggested that they also stream the launch event online for those who are unable to attend in person:

We need protests. Please live stream your meeting on 15th so we can all attend even virtually. This cost of living crisis means not everyone who wants to be there can afford to. I'm sure you'll attract a lot more support. I for one will protest.

According to Enough is Enough:

Trade unions, community groups, tenants’ organisations and politicians came together this week to launch the campaign, which has received 300,000 sign-ups and over 6 million launch video views in just three days.

“I’ve got faith in working-class people. They’re always underestimated, but they’ve got the intellect and ideas to make change in this country.”

The group has five key demands which it intends to build mass support behind:

However, currently the campaign doesn’t appear to be calling specifically for the nationalisation of utilities.

Besides the rallies, Enough is Enough plans to form community groups, as well as organising solidarity with striking workers. The group has also stated it will take “action against those profiting from the misery of millions”.

“It’s purely marketing. No-one built a power station, there is no investment whatsoever – but we are now paying utility bills which are beyond belief.”

Mick Lynch of @RMTunion on the private energy rip-off.#EnoughIsEnoughpic.twitter.com/xc0u6HT6oi

There’s always another crisis and it’s always workers who pay the price.

Working people are seeing how a tiny elite want to make their lives all about working harder and longer for less. Now that same elite is profiteering from a cost-of-living crisis that will drive millions into poverty with sky-high bills.

Things can’t go on like this: it’s time to say enough is enough.

We are seeing record profits for big business, a record number of billionaires, and record wealth for the top 10%, while life is getting harder for everyone else.

For too long, Britain’s political class has chosen the greed of a wealthy elite over the needs of the vast majority.

It’s time to turn anger into action. These 50 rallies are just the start: we need to build a country that works for everyone.

As the Tories’ class war intensifies in the form of the cost of living crisis, grassroots solidarity and mobilisation may be our only hope. And campaigns like Enough is Enough and Don’t Pay UK could work if they succeed in bringing this mobilisation into effect.