The Department for Work and Pensions (DWP) has revealed it is sanctioning more claimants than ever before. It comes as the so-called ‘cost of living crisis’ continues to worsen. And unless the DWP takes action now, the situation for countless people will become even graver – because being sanctioned means people have money deducted from their benefits.

DWP: sanctions on the up

On Tuesday 16 August, the DWP released new sanction figures. It said that it sanctioned 59,000 people in March 2022. The DWP noted that:

This is the highest number of adverse sanction decisions on UC [Universal Credit] full service across the whole timeseries, and 160% larger than it was at its previous pre-pandemic peak in July 2019 (23,000).

However, there are now far more Universal Credit claimants than there were before the pandemic. So, an increase in the number of people the DWP sanctions is to be expected. However, there’s another figure which shows that the department is now truly sanctioning more people than ever before.

As the DWP revealed, the percentage of total Universal Credit “full service” claimants with a sanction has also hit a record high. It now stands at just under 6%: 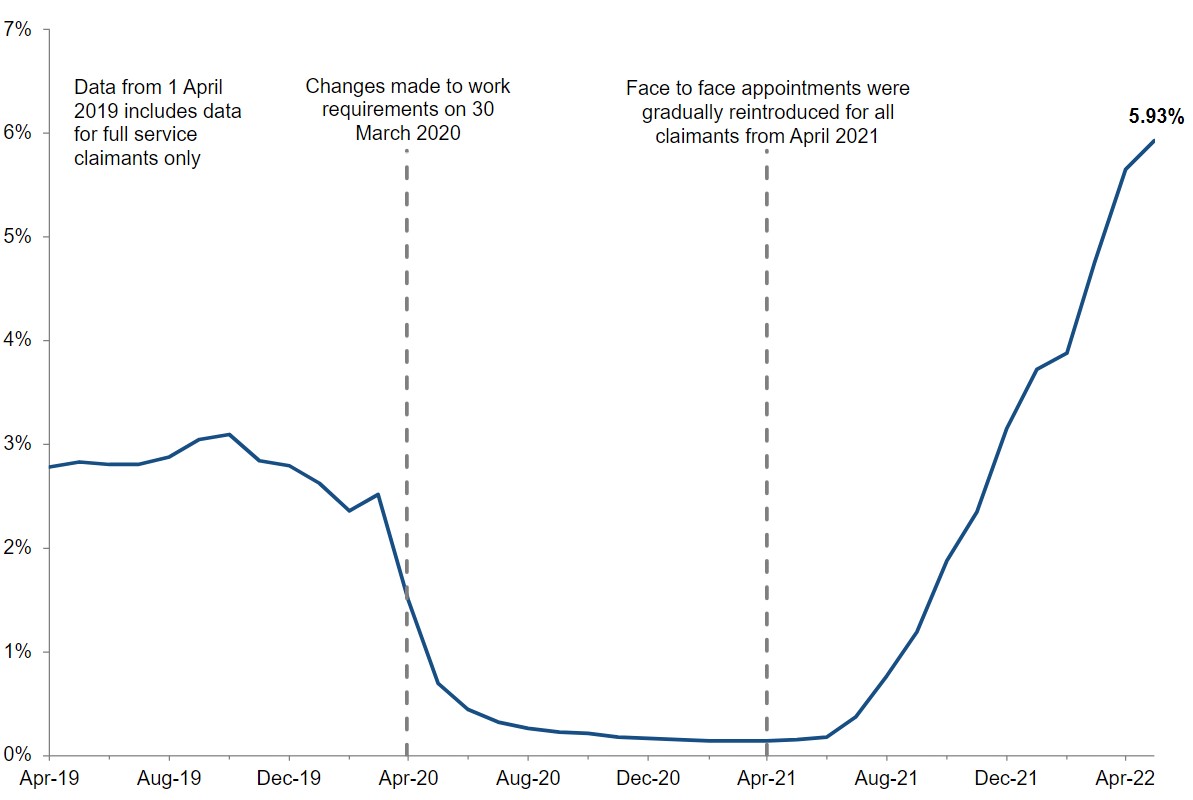 What the DWP didn’t say was that this is an increase of 136% since February 2022. Moreover, the Universal Credit sanction rate of just under 6% is huge compared to other benefits. This is also true at any point since the DWP started recording sanctions. It’s far higher than Jobseeker’s Allowance (JSA) sanctions: 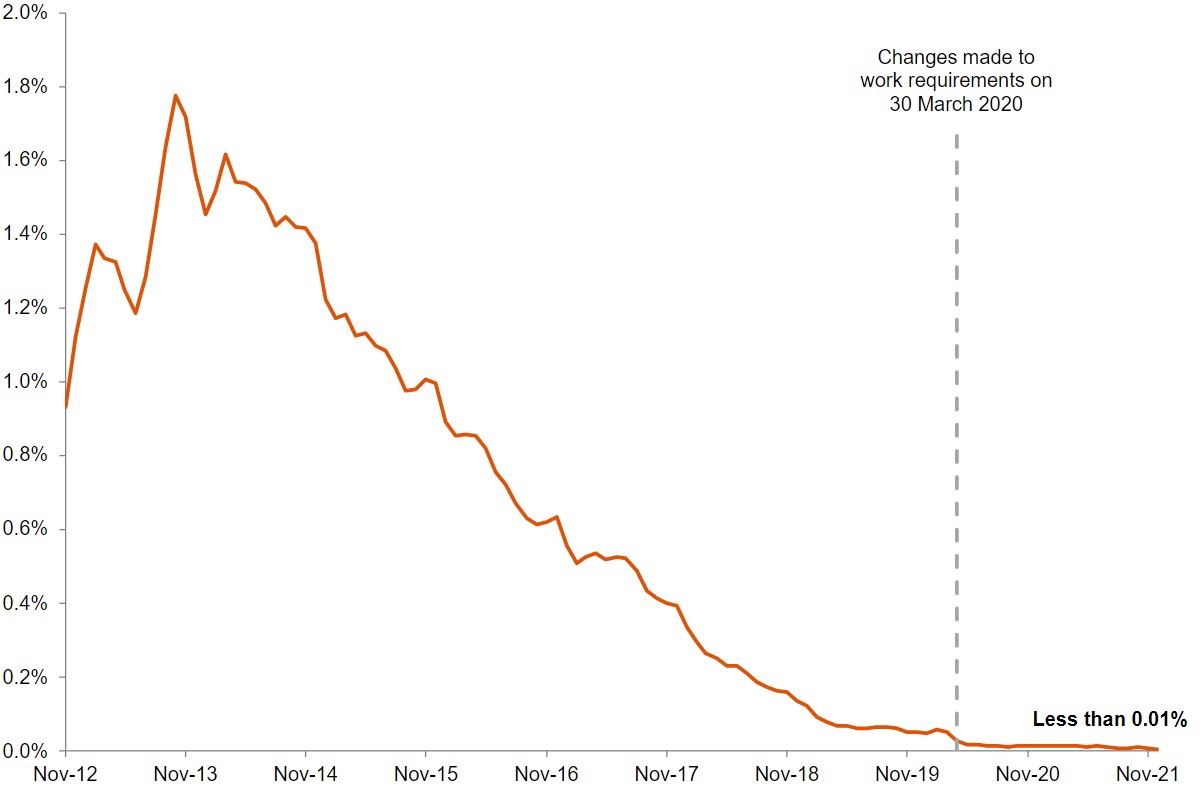 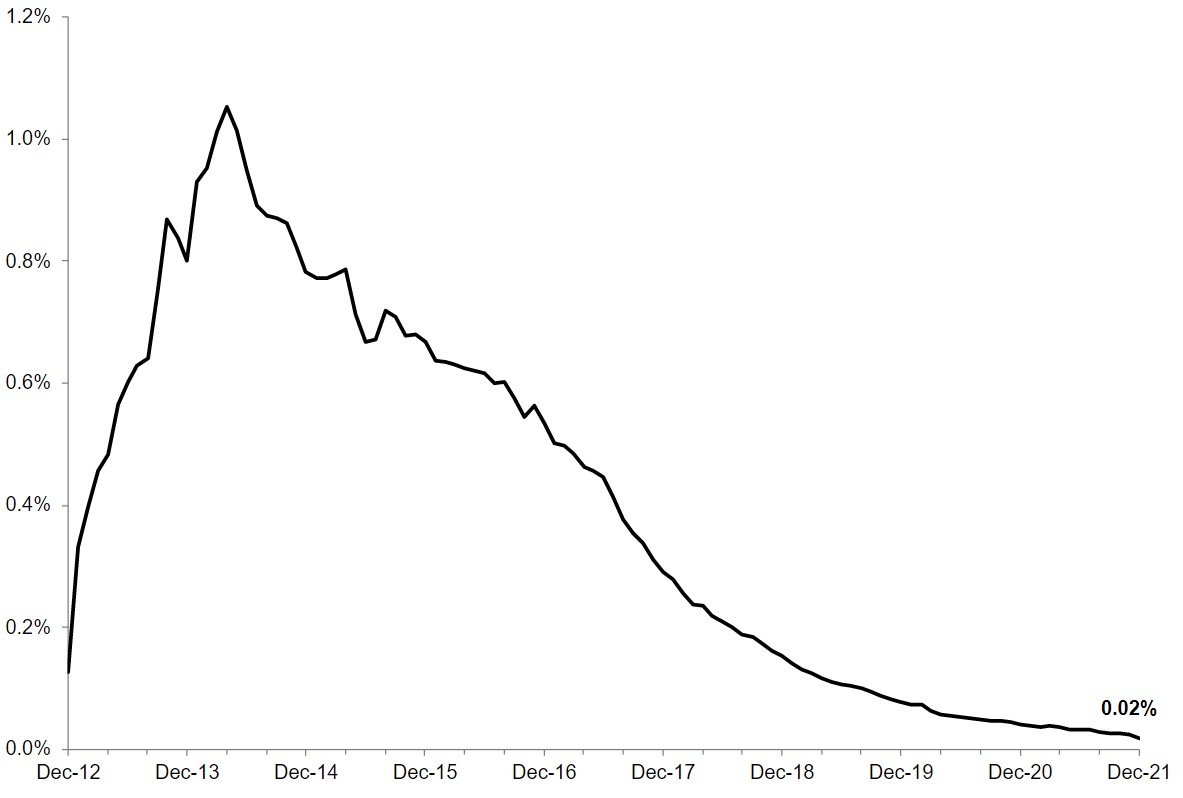 The DWP has tried to explain the huge jump in sanctions away. It said:

At the beginning of the pandemic, conditionality was paused for Universal Credit claimants and face to face appointments were suspended… In July 2020, DWP reintroduced conditionality.

But it was also forced to admit that:

In May 2022, 33.3% of the UC [Universal Credit] caseload were in the conditionality regimes that could be subject to sanction, compared to 45.3% in February 2020, just prior to changes made to work requirements as a result of COVID-19. May 2022 has the lowest percentage of claimants in conditionality regimes subject to sanction when compared to the timeseries from the 11 months preceding the COVID-19 pandemic.

That is, fewer people are now subject to sanctions, but the DWP is still dishing them out at record levels.

DWP social security rates are already appalling. As The Canary previously reported, the department is cutting – in real terms – at least £10bn off people’s money this year. This includes potentially stripping 400,000 people of their claims. Then, you have the department targeting over-50s who are not in work – with more potential sanctions on top of the current levels.

The DWP denied over two million people the cost of living payments. As the Mirror reported, this also included some people whom the department sanctioned. Plus, from 26 September, a new rule around earnings for working people means the DWP could sanction yet more claimants.

The cost of living crisis is hitting DWP claimants harder than many other people. However, it seems that the DWP is becoming more aggressive and punitive in its treatment of people on its watch. This appalling response to a crisis entirely created by the political and corporate class is nothing short of a disgrace. And while people kick-back against the energy price rises and workers strike and protest, maybe it’s time DWP claimants took action, too.

In the last decade chronically ill and disabled people led the way on protesting government austerity. Now, with so many non-disabled people caught-up in the social security system, an alliance of claimants could stand as a powerful force against the DWP – and corporate capitalism more broadly. Now is the time for this to happen.