As Enough is Enough launches, the working class are fighting back - Canary 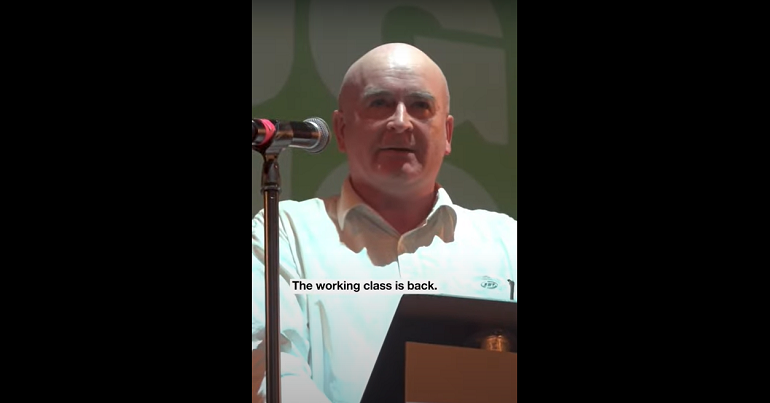 Organised workers are on the move. After years of stagnancy, UK trade unions are starting to ramp up activity again. Needless to say, there’s been little help from the Labour Party. But the waves of strikes are unmistakeable signs of rising working class militancy.

The increased popularity of trade union leaders, such as the RMT’s general secretary Mick Lynch and Unite’s Sharon Graham, suggests the post-Corbyn hangover is easing.

At the launch of the Enough is Enough campaign on Wednesday 17 August, Lynch told the audience: “The working class is back”:

'The working-class is back and we refuse to be poor anymore.'

Enough is Enough (EIE) is a new force in the class war. Its supporters include a number of socialist MPs, such as Zarah Sultana and Liverpool’s Iain Byrne. The Tribune, Acorn and the Communication Worker’s Union (CWU) are also backers. EIE has five demands:

Its orientation appears to be social democratic, evidenced by many familiar faces from the Corbyn era being on board. Interestingly however, as The Canary recently pointed out, EIE does not appear to be calling specifically for the nationalisation of privatised utilities.

EIE has also been notably endorsed by former US presidential candidate Bernie Sanders, who tweeted his support on Wednesday 17 August:

Enough is enough. In the U.S. and across the world, working people are fighting back. They are sick and tired of seeing the rich get richer, while workers fall further and further behind. We stand in solidarity with our brothers and sisters in the UK. https://t.co/M9OqHXU6dX

So there are positive signs. But as The Canary‘s Steve Topple has pointed out, there needs to be an increased emphasis on particular marginalised groups – not just workers:

This is my concern. Once again chronically ill and disabled people, homeless people and non-working social security claimants appear to be an afterthought. Much like the TUC rally the other week #EnoughIsEnough https://t.co/PIxMftzKhw

The Don’t Pay campaign came onto the scene earlier than EIE. It has a narrower aim and different politics. Since an energy crisis for working class people is looming large, Don’t Pay is encouraging people to refuse to pay their energy bills as a form of direct resistance. As The Canary reported recently:

Don’t Pay’s website lays out a plan to address this. They will demand a reduction in energy bills, and get people who have joined the campaign to cancel their direct debits from 1 October if the first demand isn’t met – but only if a million people pledge to join them.

It’s worth pointing out that, with 1 October rapidly approaching, at the time of publication Don’t Pay has only collected 108,752 pledges according to their website. This might be a matter of a lack of working class confidence to resist directly by non-payment. Or maybe it’s a case of the message not cutting through on the intended scale.

The level of interaction between EIE and Don’t Pay is hard to gauge. However, it’s difficult to imagine serving MPs publicly backing an action which could be deemed ‘illegal’.

Don’t Pay’s politics are quite different from those of the more reformist EIE. Direct action of this kind seems to suggest a more libertarian or anarchist, bottom-up ethos. Understandably for a group of its kind, the founders do not have a public list of organisers or backers.

While these two groups share a lot of ground, they appear to come from very different traditions. This is not to say that they are now, or inevitably will be, in conflict. Just as other parallel social struggles have complemented each other, Don’t Pay and EIE could drive each other on. This would be similar to the way striking miners and gay rights activists, Malcolm X and Martin Luther King, or the Hillsborough and Bloody Sunday families have complemented each other.

The movements to seriously improve working class confidence and power need to be big, diverse, and fierce in the pursuit of their aims – and led by the working class. With the Labour Party effectively deceased, it must be hoped that Don’t Pay and EIE are the first signs of a new and energetic movement of workers.