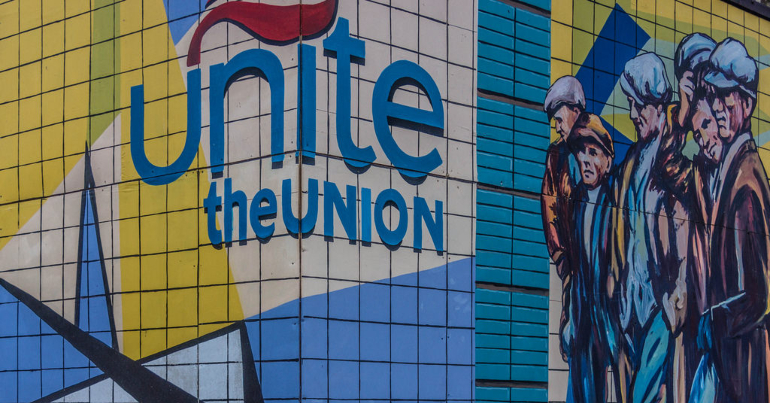 Tory leadership contenders Rishi Sunak and Liz Truss are frantically promoting themselves as the heirs to ultra-conservative prime minister Margaret Thatcher. She, of course, was the Tory flag-bearer for the war against Britain’s working class and trade unions.

Meanwhile, Unite the Union has announced it will be organising not just in industries but in communities too. This approach would dovetail with other community-based initiatives, as well as with strike action organised by other unions, such as the RMT.

Unite has issued a press release announcing that it will be organising across and within communities. Unite general secretary Sharon Graham says:

We need to build power in our workplaces and simultaneously organise in our communities. Unite will establish permanent bases on the ground to work with workers within their communities.

It’s time to challenge the status quo. Workers and communities from across the political spectrum can join together to demand higher wages, freedom from fuel and food poverty, and pensions that allow us to retire comfortably. That and so much more.

What you are going to get is a wave of solidarity action, generalised strike action, synchronised action….

And you’ll see it in every sector of the economy, in education, in health, wider parts of the transport system, in all sectors, the private sector as well.”

The sentiments expressed by Lynch and Graham are not dissimilar to some of the methods outlined by syndicalist organisations. Briefly, the syndicalist approach can be described as:

a theory and movement of trade unionism… in which all means of production and distribution would be brought under the control of federations of labor unions by the use of direct action, such as general strike.

The Industrial Workers of the World (IWW) is one example of a union that’s adopted a syndicalist approach. This means it’s open to workers in all industries, not by trade. It has been most active in the USA, particularly in the first half of the 20th century, and was at the forefront of numerous strike actions.

On a much smaller scale, the Solidarity Federation (SF) is a UK-based anarcho-syndicalist organisation that promotes revolutionary unionism. SF is the UK branch of the International Workers Association – Asociación Internacional de los Trabajadores (IWA-AIT). This is “an international federation of anarcho-syndicalist labour unions and initiatives” that has operated globally over many decades.

Another example of anarcho-syndicalism is the Confederación Nacional del Trabajo (CNT-E or National Confederation of Workers, Spain). Its website says:

this is what we are: wage earners, retirees, homemakers, unemployed, students, immigrants …. Men and women – above ideological, racial, gender, age, professional category differences … – who join forces to face our adversaries.

We are the organized Working Class. Our most precious assets are Freedom and Dignity. We are not afraid of anything. Let’s change the world.

The CNT-E, with a membership at its height of “well over one million”, has helped organise several general strikes in Spain. Together with anarchist militias (Iberian Anarchist Federation or FAI), the CNT-E was also at the forefront of the fight against Franco’s fascists during the Spanish civil war. It played a key role in the collectivisation of land and industry. And it helped set up defensive measures in the towns and cities, such as in Barcelona.

On the other side of the barricades, the Tory Party is busy waging class war against UK workers.

One of numerous examples of how Tories are making working class people pay for the cost of living crisis can be seen in the way energy prices are manipulated.

The French people have a publicly owned energy company. The UK remains tied to failing privatisation.

Just look at the results. pic.twitter.com/L4D5uad1of

Water Companies put your bill up 40%, pumped 0.5 million tonnes of untreated sewage into your waterways, lost 800 billion litres in leakages & still had the brass neck to collect £11.8 million a year in pay & bonuses and hand £70 billion to shareholders.

This is corporate theft.

To protect 🇫🇷from energy poverty Macron meanwhile has
-frozen gas prices for all of 2022
-capped electricity price rises at 4% for 2022
-begun to fully nationalise EDF, to force it to take the hit
-increased petrol subsidies at the pump to 30c/l from Sep
-raised benefits by 4% pic.twitter.com/UehyBRsyTB

Pedder shared this graph which shows how, in relation to the cost of living crisis, the UK has one of the widest gaps between rich and poor: 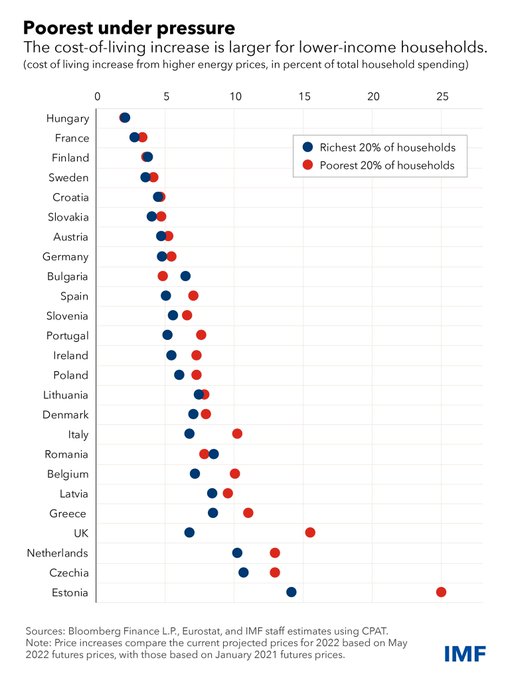 Medical professionals have also raised concerns about the impact of the cost of living crisis on public health. On 18 August, heads of the NHS confederation sent a letter to chancellor Nadhim Zahawi. The letter is on behalf of service leaders across the NHS in England, Wales, and the north of Ireland.

If people cannot afford to heat their homes sufficiently and if they cannot afford nutritious food, then their health will quickly deteriorate. This will increase the already high number of annual deaths associated with cold homes – estimated at around 10,000 a year. As health leaders, we are clear that unless urgent action is taken by government this will leave an indelible scar on local communities and cause a public health emergency.

The letter concludes that if the government fails to act, that risks a health emergency.

Meanwhile, in a leaked recording of comments made by Liz Truss when she worked at the Treasury, the PM candidate can be heard criticising “British working culture”. She adds that we need “more graft” from the working population.

This reveals her Thatcherite disdain for people who work long hours on shit pay. Truss also seemingly loves to pose as another Thatcher:

Liz truss is definitely not imitating Margaret thatcher. No way. Why would anyone think that? pic.twitter.com/IvbcIBH1DA

According to RMT’s Mick Lynch, Truss is:

proposing to make effective trade unionism illegal in Britain and to rob working people of a key democratic right. If these proposals become law, there will be the biggest resistance mounted by the entire trade union movement, rivalling the General Strike of 1926, the Suffragettes and Chartism.

Regarding industrial action, The Canary previously reported on news that Truss plans to bring in minimum service levels on critical infrastructure during strikes. In other words, the government will facilitate scab action, just as Thatcher did with the Nottinghamshire miners.

Mick Lynch of the @RMTunion on Liz Truss threatening to effectively abolish the right of workers to withdraw their labour. pic.twitter.com/UWqVAmfOaV

Meanwhile, not to be out done by his rival, Rishi Sunak says that Thatcher was the best Tory leader the UK has ever had.

Sunak asserts he wants to get tough on the welfare system, arguing there are more people claiming unemployment benefit than there are job vacancies. However, The Canary’s Steve Topple has debunked these claims. He pointed out that the official unemployment rate is 1.29 million, and the number of job vacancies closely matches this.

Peter Stefanovic also pointed out that the majority of claimants are either in work or seeking work:

THIS IS BEYOND SHOCKING

WHERE IS THE OUTRAGE? WHY IS THIS NOT BEING REPORTED? pic.twitter.com/dPkmoSknak

Further, Sunak was responsible for the increase in National Insurance contributions and cut the £20-a-week increase to Universal Credit. He’s also filthy rich.

To counter the crisis, former Labour leader Jeremy Corbyn is advocating an immediate wealth tax and nationalisation of energy, water, rail, and mail:

The cost of living crisis has laid bare the inequality and injustice of the broken system.

Meanwhile, Don’t Pay is a campaign that demands:

a reduction in energy bills, and get people who have joined the campaign to cancel their direct debits from 1 October if the first demand isn’t met – but only if a million people pledge to join them.

And the Enough is Enough campaign is demanding significant pay rises, the slashing of energy bills, an end to food poverty, decent homes for all, and taxation of the rich.

It’s time, they say, to channel anger into action:

Enough is enough. It's time to turn anger into action.

This struggle is not only about improved wages and better job conditions. It’s about the survival of hundreds of thousands of people who each day face starvation, deteriorating health, and even death.

And by combining nationwide industrial action with community direct action, we could begin to turn things around.