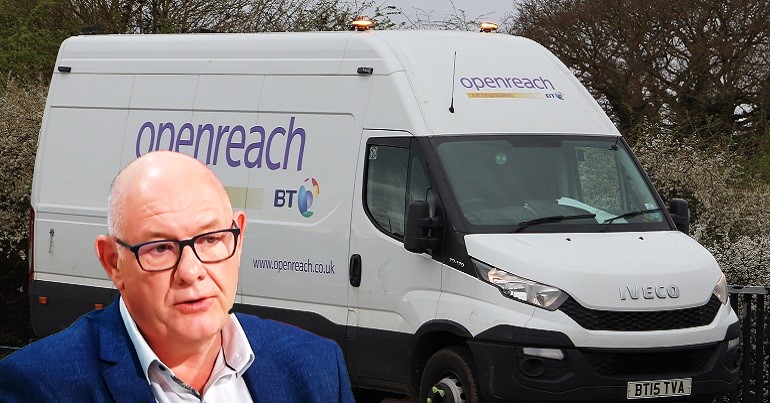 As the Communication Workers Union (CWU) prepares for another two-day strike, its general secretary Dave Ward has slammed BT bosses for “using Swiss banks while workers are using food banks”. He says that his members ‘won’t stop until they’re listened to’ and are ‘determined to win’.

Over 40,000 Openreach and BT call centre workers are striking again on Tuesday 30 and Wednesday 31 August. They’re walking out over pay. This is because BT has offered a flat £1,500 pay rise this year. The CWU says this is a “dramatic real-terms pay cut”. It noted in a press release that:

It is also in the context of BT making £1.3 billion in annual profit, with CEO Philip Jansen gaining a £3.5 million pay package – a 32% wage increase – while the Big Issue and the BBC have reported instances of BT Group offices establishing food banks to assist employees.

This is the first time BT workers have gone on strike since 1987. The action is also groundbreaking. Because it is the first ever national call centre strike in the UK. CWU members previously walked out on 29 July and 1 August. Now, they’re doing it across consecutive days. As the CWU said:

The strike action is also likely to have a serious effect on the roll-out of ultra-fast broadband, and may cause significant issues for those working from home.

BT’s response to the strikes has been low-key. It stated:

We know that our colleagues are dealing with the impacts of high inflation and, although we’re disappointed, we respect their decision to strike. We have made the best pay award we could and we are in constant discussions with the CWU to find a way forward from here. In the meantime, we will continue to work to minimize any disruption and keep our customers and the country connected.

But Ward’s response to BT is far from meek.

The CWU general secretary said in a press release:

The disruption caused by this strike is entirely down to Philip Jansen and his ridiculous refusal to speak to his workers about a fair pay deal.

These are the same workers who kept the country connected during the pandemic. Without CWU members, there would have been no home-working revolution, and vital technical infrastructure may have malfunctioned or been broken when our country most needed it.

These people have performed phenomenally under great strain and have been given a real-terms pay cut for a reward, while Jansen has rewarded himself a 32% pay increase off the backs of their work.

The reason for the strike is simple: workers will not accept a massive deterioration in their living standards.

We won’t have bosses using Swiss banks while workers are using food banks.

BT Group workers are saying: enough is enough. They have serious determination to win, and are not going to stop until they are listened to.

The UK is currently gripped by the biggest worker mobilisation in decades. From rail, to post, via BT, barristers, dock workers and potentially civil servants and nurses – people have had enough of corporations and the government. With campaigns like Enough is Enough trying to join the dots between these individual actions, the mobilisation is further increasing. The challenge now is whether we can create enough sustained pressure to create lasting change in this country.