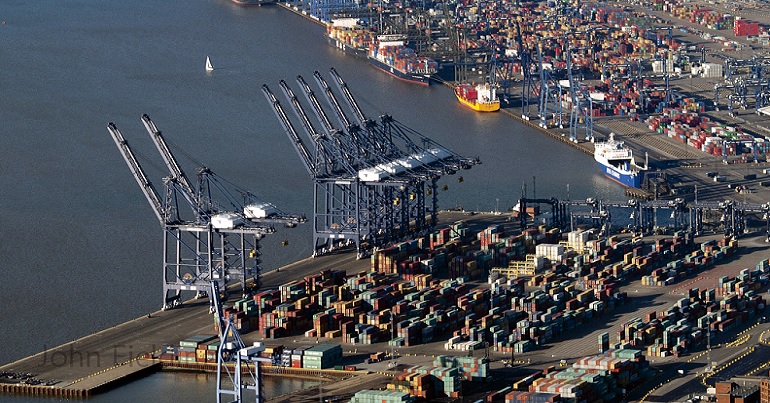 Workers are set to strike at the UK’s largest port. It comes as the company that owns it offers staff a pay cut. But, predictably, workers are suffering while the bosses avoid tax.

The Port of Felixstowe is the UK’s “biggest and busiest” container port. The official spiel on its website states that:

the port provides some of the deepest water close to the open sea of any European port. Around 17 shipping lines operate from Felixstowe, offering 33 services to and from over 700 ports around the world.

Together with its unrivalled rail and road links connecting the port to distribution hubs in the Midlands and elsewhere in the UK, Felixstowe plays a pivotal role in keeping the UK’s trade moving, and delivers real benefits to customers, the community and the industry.

48% of the UK’s container trade goes through the the dock. But what the Port of Felixstowe also does is pay its workers a pittance. Unite the Union says its operator, the Felixstowe Dock and Railway Company, gave staff a tiny 1.4% pay rise last year. This year, it’s only offering 5%. That’s around half the rate of inflation. That means bosses are giving workers an effective pay cut. So, workers voted by 92% to strike in August on an 81% turnout. Unite has not set dates for the industrial action yet.

A strike of bosses “own making”

The bottom line is this is an extremely wealthy company that can fully afford to give its workers a pay rise. Instead it chose to give bonanza pay outs to shareholders touching £100 million.

Unite is focused on defending the jobs, pay and conditions of its members and we will giving 100 per cent support to our members at Felixstowe.

Workers should not be paying the price for the pandemic with a pay cut. Unite has undertaken 360 disputes in a matter of months and we will do all in our power to defend workers.

Unite told The Canary this is the first industrial action at the port since the 1980s. As BBC News reported, Unite members make up 1,900 of the 2,550 staff at the port. The union’s regional officer Miles Hubbard said:

This dispute is of Felixstowe’s own making. Strike dates have yet to be announced but even at this late stage the dispute could be resolved by the company returning to negotiations and making a realistic offer.

Felixstowe workers: ‘back to the 70s’

The Port of Felixstowe isn’t having it. A spokesperson told BBC News:

Both parties are still talking and we hope to avoid any industrial action. The company made what we believe to be a very fair offer and we are disappointed with the result of the ballot.”

Of course, while workers get a pay cut, bosses are laughing all the way to the bank. As Unite said, the Felixstowe Dock and Railway Company’s:

most recent accounts show that it made pre-tax profits of £61 million in 2020, when it also paid out £99 million in dividends.

Moreover, the Port of Felixstowe’s ultimate parent company CK Hutchison Holdings is a tax avoider. Meanwhile, the Tory government is rattled by this and other strikes. Jacob Rees-Mogg accused unions of acting like it was the 1970s.

Workers are currently taking matters into their own hands across the UK. From the Communication Workers Union (CWU) to the RMT, there are levels of strikes not seen for years this summer. Meanwhile, the situation for millions of people is disastrous. Now, surely it’s time for unions to really put their members, and the rest of us first – and call a general strike.