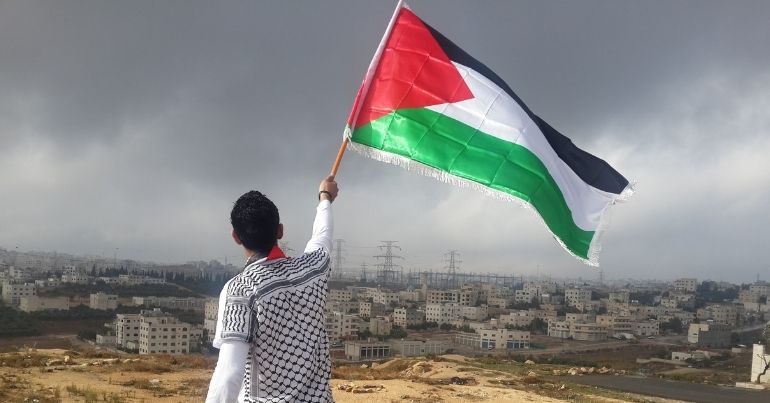 Content warning: Embedded tweets in this article show footage that some readers may find distressing.

On Friday 29 July, Amjad Nashaat Abu Alia was shot dead, allegedly by an Israeli settler. Amjad was attending a demonstration against a colonial outpost set up by Israeli settlers on the land of a Palestinian village.

The village of al-Mughayyir is close to Ramallah in the West Bank. It has been experiencing frequent violent attacks from settlers, who are being protected by the Israeli army.

Today 16 year old Amjad Abu Alia was shot in the chest and killed by Israeli colonial forces. He died in al Mughayyir village near Ramallah during a protest against settlement expansion near the village. He was shot as he was running away from the soldiers’ and settlers’ attacks. pic.twitter.com/fqC9yNulsg

Gunshots are clearly audible as the Palestinian demonstrators run away from armed Israeli settlers.

The settlers today were suppressing the march with stones and shooting, and the soldiers stood by and watched… It was about five armed settlers who opened fire at the demonstrators,

Amjad Abu Alia, 16, is the only child for his parents. Amjad was shot dead today by lsraeli forces. Palestine. pic.twitter.com/1MkGtny2KD

While Palestine Online shared an image of Amjad’s mother mourning her son:

The mother of Palestinian teen Amjad Abu Alia, who was shot dead by Israeli settlers in Al-Mughayer village, takes a farewell look at him. pic.twitter.com/iAfCSzmRRv

And Times of Gaza shared this harrowing video of Amjad being treated for his wounds as he’s rushed from the scene in an ambulance:

The last moments of horror that the Palestinian martyr Amjad Abu Alia had to endue before taking his last breath. The Palestinian child was shot by the Israeli occupation forces in Al-Mughayyir village, northeast of Ramallah. pic.twitter.com/gxEGMWxkhF

A call for international solidarity

Palestinians are calling for global solidarity in their struggle against Israeli violence, colonisation and apartheid. One way you can show support is by joining the international boycott of Israeli companies. Check out the Palestinian campaign for Boycott, Divestment and Sanctions’ website to find out how to get involved.

The Popular Front for the Liberation of Palestine (PFLP)  – a Palestinian left wing anticolonial movement – dubbed Amjad a martyr. They wrote:

A proud salute to the spirit of the martyr Amjad Nashat Abu Alia (16 years), who was martyred as a result of the cowardly execution of the Zionist terrorist army during the confrontations that erupted in the village of Al-Mughayyir.

They called for an end to economic agreements with Israel, and a sporting boycott:

This criminal entity, the killer of children and the enemy of humanity, must be held accountable with full force for its ongoing crimes against our people, not to… make economic, legal and sports agreements with it.