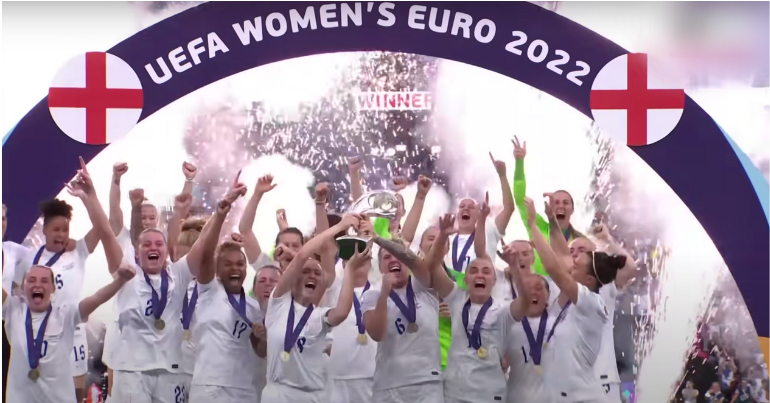 The England women’s team has won the European championships at Wembley. It’s the first time the national team has won a major tournament, and celebrations have kicked off around the country.

People on social media have been celebrating the historic win. The Union of European Football Associations (UEFA) said there was record attendance for the match:

Record breaking from start to finish 🤩

The #WEURO2022 final has become the ALL-TIME most-attended match at either a men's or women's EURO final tournament 👏👏👏 pic.twitter.com/4wZqIP7rlm

Sports reporter Beth Fisher pointed out, along with many others, that women used to be banned from playing football:

What a moment for all those who battled before to get this current crop here 🙌🏻 #WEURO2022 pic.twitter.com/8eDKAT2t6n

There were many tweets shared like the one below on what this victory means for women and girls:

This is why it matters. Representation. My daughter doesn’t have to have an interest in football. She just has to know that it’s an option. That she can become anything she sets her little heart on. From a princess to a lioness. And everything in between. #Lionesses #WEURO2022 pic.twitter.com/TIkWuD4gxu

In the post-match commentary, however, presenters Ian Wright and Alex Scott made some important points.

Ian Wright gave some pre-emptive advice to brands and politicians now taking a sudden interest in women’s football when they haven’t previously supported it:

To any brand or agency currently planning a reactive ad off the back of the #lionesses win, @IanWright0 has some advice: #genderpaygap pic.twitter.com/zhqfY6YtW1

Wright said that the game needed “continuous support” in order to grow.

Research from the British Library states that women have been playing football in England since the late 18th century. Back in 1921, the Football Association (FA) banned women’s football in an effort to make sure the sport did not threaten the men’s game.

Since then, it’s been a case of the massive underfunding of what should be a grassroots sport. According to the Association for Physical Exercise, only 63% of schools offer football to girls. Ian Wright picked up on this too – when England reached the semi-final, he said “we’ve got to make sure [girls] are able to play”:

Ian Wright could have joined in with the painstaking cheerleading going on around him. But instead he chose to suggest that if this night doesn't act as the catalyst for girls nationwide being able to play football in PE, then it's worthless. Superb. pic.twitter.com/XXzyah2L6c

Plenty of people noticed, and praised, his words:

Ian Wright playing a real blinder as he rips into the FA, sponsors, clubs and TV companies for not doing enough to support women's football…

It shouldn't be unusual to see such wholehearted support from a well known figure in the game, but apparently it is.

Here’s @AlexScott reminding us all that 4 yrs ago when women’s football needed larger stadia, many clubs said NO
They know who they are!! pic.twitter.com/rBWGDIFZ9E

Where are the Black Lionesses?

England won the Euros not because of the system, but in spite of it. Women’s football has not been supported as it should have been by the government, or even the FA and UEFA themselves. Now that it’s proven to be a popular success, it’s a good time to learn lessons for the future.

Moreover, the whiteness of this England team is plain to see for everybody. There have been prominent Black women involved in the England women’s team in the past. Hope Powell was the national coach, Alex Scott herself played for England and Arsenal, Eni Aluko had an excellent career as a footballer, and Mary Philip was the first Black woman to captain England. Campaign group Women in Football noted that Emma Clarke was the first recorded Black female football player, and that was in the 1890s.

However, in the current England squad, Football365 noted:

In the current England women’s squad there are just three players of black or mixed heritage – Nikita Parris, Demi Stokes and Jess Carter.

Set-up of elite women’s football in England needs to change – and saying so is not a criticism of this squad or manager.

What’s next for women’s football?

Asante identified that this is a problem which can’t be solved overnight. It’s about infrastructure. Wright and Scott are correct to call out the government, brands, and other sponsors – they’ve ignored women’s football until now. This England team has shown them that this is no longer acceptable.

Young girls who cannot see anyone who looks like they do lack heroines to emulate – and that matters.

Young girls will have had a joyous time last night watching people who look like them win a major championship. However, if we’re going to demand change in the sport, we need to demand change for everybody. Young Black girls deserve to see people who look like them at all levels of football. Black women have long had their history in this sport undermined. It’s time to dig up and unsettle that history, so we can build a foundation that includes all types of women.