Don't Pay UK: is the campaign all it makes out to be? 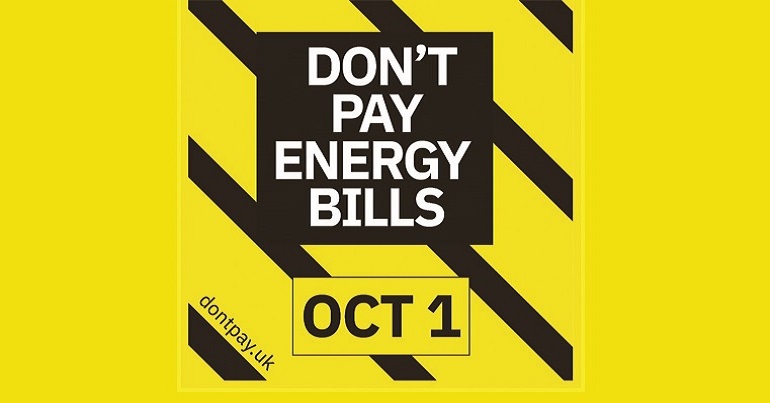 Campaign group Don’t Pay UK has hit the headlines recently. It’s gaining momentum for its action against the so-called ‘cost of living crisis’: specifically, soaring energy bills. And one tweet from it sums up the situation millions are facing. But will the campaign actually work? And is it inclusive of everyone?

Don’t Pay UK is trying to organise a mass non-payment of energy bills. It says on its website that:

we are demanding a reduction of energy bills to an affordable level. Our leverage is that we will gather a million people to pledge not to pay if the government goes ahead with another massive hike on October 1st.

Don’t Pay UK’s action comes as the government and corporations continue to allow energy prices to spiral out of control. Analysts now say that the price cap could hit over £3,600 by January 2023. This is a 158% increase since October 2021, when the cap was £1,400. This could leave around 30% of all households in the UK in fuel poverty. On Tuesday 2 August, Don’t Pay UK summed the situation up well on Twitter. It shared an email from a supporter to their energy supplier. The person said that the cost of energy meant their “3 children won’t eat regular meals”:

This is the state of Britain. 😢 (screen shot sent to us by someone who is pledging to strike on Oct 1st). #dontpayuk pic.twitter.com/QASme838vA

As the person who sent the email noted, energy companies are raking it in. Five of the world’s biggest fossil fuel companies saw combined profits of £50bn in the first half of the year.

So, Don’t Pay UK is determined to take action to stop the price rises. But will it make a difference – firstly to the poorest people, and secondly in the long term?

Poorest people: no choice but to pay

Don’t Pay UK’s campaign is specifically aimed at people who pay their energy bill via direct debit. As its website says:

These people cannot protest by not paying – because they would simply have no energy. As someone pointed out on Twitter:

There are thousands of people who can't do this as they are on prepayment meters . They don't top up or put money on the meters they don't get gas and electric.
What can they do?

About 4.5 million on pre-payment meters, paying higher tariffs and in real danger of “self-disconnection” if they can’t top up. They can help support the campaign because if it wins, we all win.

Moreover, for poorer people who do pay their energy bills by direct debit, there could be further problems. Not paying could negatively impact their credit score.

The campaign states on its website that it hopes to:

put energy companies in serious trouble… We want to bring them to the table and force them to end this crisis.

It makes a comparison to another non-payment action:

One example would be in the resistance to the Poll Tax: more than 17 million people refused to pay and it became impossible for the Thatcher government to successfully implement the policy.

But as with every campaign on a specific issue, the challenge is whether it will make a lasting difference in the long term. One example is Don’t Pay UK’s citing of the anti-Poll Tax movement. While direct action and non-payment worked initially, the UK has been left with the Council Tax system. As the Resolution Foundation think tank summed up, this is now as “regressive” as the Poll Tax would have been anyway.

Don’t Pay UK, while excluding the poorest people, is a worthwhile show of public defiance in the face of the corporate capitalist system. But it is only a short-term solution to an entrenched problem. Negotiating with corporate monoliths will only end in compromise or a quick-fix. Long term, and as a minimum, nationalised energy would be the first step in ensuring that the chaos millions of people are facing never happens again.