Tory leadership candidate Rishi Sunak has vowed to get ‘tough’ on benefit claimants – despite there being no evidence that this is necessary. Of course, what the ex-chancellor is doing is simply continuing what his Tory mates started: stigmatising the welfare state in order to prop up the UK’s collapsing economy.

As the Mirror reported, Tory leader (and therefore PM) candidates Sunak and Liz Truss have both said they’ll crack down on social security claimants. Sunak seems the worst offender. He said:

If there are hours to do, if there’s a job going, people should have to take the job, as opposed to just being able to stay on benefits…

Ultimately, it’s your taxes and someone who’s working very hard’s taxes that are paying for that.

I strongly believe that part of the answer to this problem is being much tougher on our welfare system to get people off benefits and into work.

Of course, this kind of attack on social security claimants has been the MO of successive governments for around 25 years. But as it was back then, right now the facts simply don’t support the idea of ‘scroungers’ – with Sunak lying in the process, too.

DWP: the reality of Sunak’s claims

DWP stats show that of the 5.56 million Universal Credit claimants:

This leaves 29% of Universal Credit claimants as potentially being non-workers. This would be the people Sunak is talking about. But even then:

This leaves around 24% of Universal Credit claimants, or 1.3 million people who are non-workers. Then, across the other work-related social security:

So, this means that overall, the DWP would class at most just over 1.4 million people as unemployed and capable of working immediately. The official unemployment rate reflects this, standing at 1.29 million – and is at an almost 50-year low: 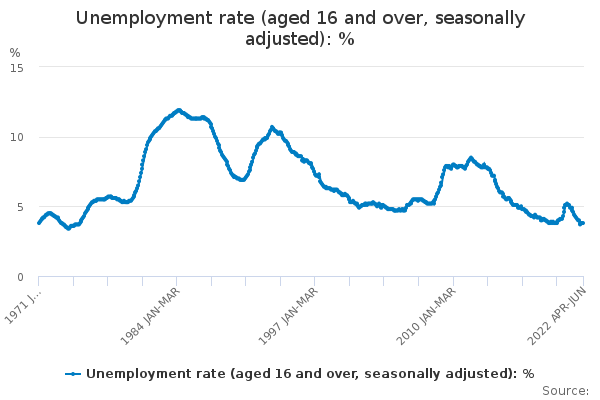 Right now, there are more people claiming unemployment benefit than there are job vacancies in the economy.

This is not true – as the number of job vacancies is 1.274 million. But if the unemployment rate is really low and so are vacancies, what’s Sunak’s problem?

The degradation of labour

Another issue with the labour market is partly the economic inactivity rate. This is how many people cannot work or cannot look for work. These are people who are retired, students, or cannot work due to health/disability. It’s currently 8.9 million people – an increase of over half a million since before the pandemic. Within this, the number of people aged 50-64 who are economically inactive has increased by over 330,000 [ED: hover over final column in the economic inactivity graph].

Also, UK productivity (essentially how good workers are at making money for bosses) is also dire. This means the country is not making as much money as it could. Then, we also work less hours in the UK than other countries. And bosses have cut pay in real terms by 3% in the year to June 2022. All this combined means that when the UK is faced with a collapsing economy and recession, we don’t have a labour market that can deal with it.

Then, you have the reasons for the collapsing economy – which tie into the labour market. Productivity is so poor partly because bosses aren’t paying workers enough. It will be worse if they don’t invest in their staff. Near-record levels of people on zero hours contracts in the past two years means precarity for workers. Then, they do over nine hours overtime, on average, for free every week. The end result of all this is slowing economic growth – simply because people don’t have the income or time to spend extra money.

In short, people are working jobs which pay shit money and our health system is so poor that more and more people are too ill to work. And bosses are raking in profits, while doing nothing for workers and very little for the economy. The result of this is partly the collapsing economy.

So, what’s Sunak’s answer to capitalism and bosses destroying the labour market? Attack the welfare state and benefit claimants.

We’re already seeing where the Tories are going. As The Canary previously reported, the DWP is now targeting over-50s to force them back to work. Then, it’s also changing earnings thresholds to make around 114,000 workers look for even more work. Plus, as The Canary also reported, DWP sanctions have hit a record high. And the DWP is refusing to act on low benefit rates – effectively cutting at least £10bn from people’s money this year. So where will this leave people?

The Canary wrote in 2018 that the Tories designed Universal Credit:

to nudge everyone possible into work, and those in work into more work; making welfare reliance impossible. And anyone left? It’s their own, stupid fault…

Its architects designed it to marginalise whole sections of society; to create a dystopian world where an underclass of people exists on its fringes.

It’s what a UN rep later called a ‘digital workhouse‘.

The point being, the low-wage, low productivity economy we now have is not some mistake. At best the Tories expected it, and at worst they have helped engineer it. Universal Credit was designed for this scenario. So, Sunak’s talk of being “tougher” on claimants will just take this agenda to the next level.

The DWP is already regressive, punitive and callous. And it looks like under the next PM, it will just get worse – all to save our failing, capitalist economic system.