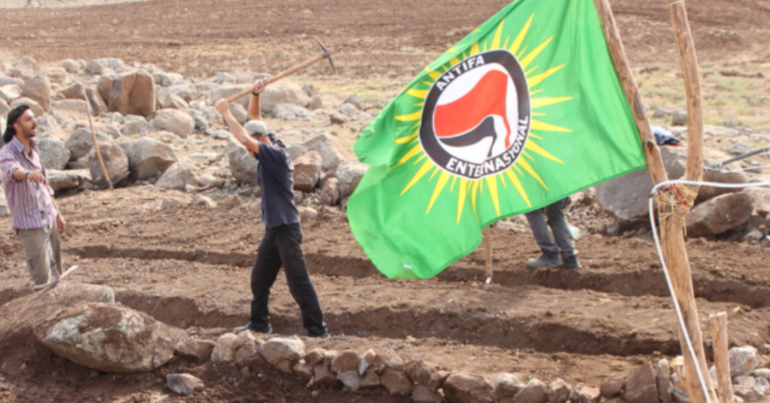 The Rojava revolution, which broke out with the onset of the Syrian Civil War brought freedom to millions of local Kurds, Arabs, and minorities, and hope to many more people across the globe. But it also showed that the Western left could not be trusted. In the UK and elsewhere, many comrades failed to stand in solidarity with the revolutionary element in that terrible conflict.

As Russia’s war in Ukraine rages on, the same sections of the left are repeating the same cruel, cynical slogans. As in Syria, we must listen to local leftists who are taking a principled, democratic stand in the face of the onslaught of imperialist violence by Putin’s Russia.

A failure of solidarity with Rojava

In the course of the Syrian conflict, we learned the hard way that the British left can struggle to take a stance on issues which should be trivially obvious. Some elements of the left struggled to condemn ISIS, framing their rise as the sole result of Western intervention in the region. The authoritarian left struggled to condemn the Assad regime, responsible for mass butchery and the bulk of war crimes committed in the country.

On the other hand, leftists of all stripes found reasons to condemn the Kurdish-led Rojava revolution. Some attacked the direct-democratic political project in North and East Syria (NES) for working alongside US airstrikes to defeat ISIS. Some attacked it for coordinating with the Assad regime to ensure continued supply of basic essentials to civilians in the region under its control.

Neither side stopped to look at the other and realise that the situation in NES was far too complicated to fit their black-and-white narratives. Meanwhile, comrades on the ground were sacrificing their lives, and making whatever tough compromises were necessary, to keep their people alive.

I once heard the region’s top political figure Ilham Ahmed tell a roomful of conservative sheikhs who had happily worked with ISIS but were now complaining about Rojava coordinating with the Syrian government in Damascus:

I know how brutal the regime is. They have tortured and killed my friends. But I will sit down and negotiate with anyone who isn’t actually trying to cut my head off.

No one can claim this is not a courageous or principled position. It is easy for Western leftists to sneer at comrades overseas, to wallow in purity politics which get them off the hook from actually doing anything. It’s difficult to do what Ilham and her comrades are doing. Our job is to stand alongside them and support them.

Standing with comrades on the ground

The conflicts in Syria and Ukraine are linked. Each forms a part of the ongoing contest between hard Russian imperialism and the USA’s subtler attempts to remain the dominant force on the global stage. The USA keeps troops in Syria not only because of the region’s paltry oilfields but in order to maintain a beachhead disrupting the Russian-Iranian axis of influence in the Middle East, while the Ukraine war has drawn previously recalcitrant European powers closer to a US-defined regional policy. Meanwhile, Russia’s naked aggression has darkened the skies in both Ukraine and Syria.

There is not an obvious revolutionary third line in Ukraine, as there is in NES. Nonetheless, we must recognise Russia’s invasion for what it is – the bloody and destructive expansion of a capitalist regime. We do not need to think NATO or the Ukrainian government are worthy of support in and of themselves to recognise the need to stand with Ukrainian people.

As such, we must support comrades working to stop or mitigate the brutal invasion – on both sides of the frontline. Like our comrades in the Rojava revolution, Ukrainian socialists and anarchists are not only risking their lives, but setting aside their own ideological disagreements with the Ukrainian state to fight for what is self-evidently right.

Even if they are not willing to listen to comrades from the region when they call on the Western left to avoid “leftist Westsplaining” and ‘moral relativizing’, anyone who sits in their bedroom in the UK and praises Assad or Putin in the name of ‘anti-imperialism’ need only count the bodies.

Resist Russia in Ukraine and the West at home

We live in a world of uneven but multiple imperial capitalist poles, of which the USA is the richest, most powerful, and all-pervasive, and Russia the most brutal on the battlefield. In the Syrian conflict, Russia and its allies have been by far the most brutal on the battlefield, bearing responsibility for the majority of civilian deaths outside of the Syrian regime itself. Meanwhile post-Iraq the USA has adopted a subtler military doctrine of proxy warfare and power projection. Each must be resisted in their own way. Supporting the resistance against Russia does not diminish our efforts to challenge Western capitalist hegemony at home.

In different ways, both the Ukranians and the Kurds have felt the sting of Western indifference, exceptionalism, and – in the Kurds’ case – orientalism. At the same time, the Rojava revolution reawakened a spirit of socialist internationalism in this country and elsewhere. In this spirit, we must stand alongside our comrades making tough choices in Syria, Ukraine, and across the globe.

Featured image via the author, courtesy of the Internationalist Commune of Rojava