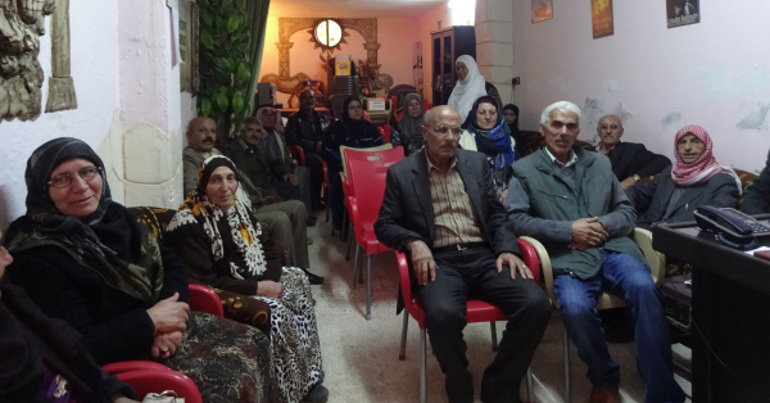 An anti-fascist fighter has given The Canary an inside account of the “direct participatory democracy” currently flourishing in northern Syria.

In 2012, a revolution began in the majority-Kurdish region of Rojava in northern Syria. People organised themselves into communes, declared autonomy, and began practising stateless direct democracy. The revolution, however, was under threat from the very beginning, and has faced invasion by Daesh (Isis/Isil) and Turkey. Hundreds of women and men from around the world have volunteered to defend this revolution.

The Canary recently spoke to one of these fighters – Argeş – and over the coming weeks we’ll be releasing his account in several parts. Read the first two parts of our interview here and here.

Argeş, an internationalist from the US, had volunteered to join the battle against Daesh. And after the group’s defeat in Raqqa, he decided to join Rojava’s social revolution.

The Canary: Can you talk about your time doing civil work?

At the end of [the battle in] Raqqa, I went to work on the civil side because [at the time] we thought that the war part was winding down and the big focus now should be on rebuilding society.

I also wanted to see this revolution that so many of us came to defend. In the military, you didn’t get to see so much: you wouldn’t see the structures in play. We saw the ideological side, but we never got to see the civil revolution in action. So I went up to Qamişlo [in Rojava’s Cizîrê region] to do civil work.

I worked in Qamişlo with an institution called SYPG, [an acronym] which translates to “for the solidarity and unity of the people”. It’s an institution under the umbrella of TEV-DEM, which is ‘the Movement for a Democratic Society’ [TEV-DEM is the people’s movement which is driving the setting up of grassroots communes in Rojava].

So every day we were getting to understand people and getting a feel for the social consciousness and following each commune’s discussions, their tekmîls and their meetings. [Tekmîl is a process of reflection, criticism and self-criticism, widely used throughout Rojava’s revolutionary structure].

[We heard] what was being discussed. So we could understand how the community was thinking and what their needs were… The idea is that we would become part of the community as well so that we could better understand the social conscience of each community… The ideological aim of Democratic Confederalism [the revolutionary directly democratic system being implemented in Rojava] is to develop meaningful connections with the community, with the people.

We do not want to try and apply a universal or dogmatic view on putting the ideology into practice. Each community has its own conscience… its own personality, strengths, weaknesses and needs. We were trying to understand the community we worked in but also to help facilitate discussions that encouraged people to start asking questions about what kind of society they wanted to create in their community, how they could empower themselves to develop, [as opposed to] some mechanism telling them how to live.

How did you feel about what was going on, and about the revolution in general?

Constantly, throughout the [revolutionary] experience, it’s been reinforced that a critical part of the ideology is that it’s open to everyone, to all perspectives, and that it has to check ego and it has to check dogma. And you actually see it being implemented by regular people. It’s not just party cadre that are holding themselves to the standard. Everyday people are earnestly getting involved in their revolution.

I think one difficulty with these [communes] is that people have so much responsibility where they get to choose and create their own reality, their own destiny. And for so long, it’s been the complete opposite, where it was a regime that dictated everything, or one force that was dictating and they were forced to follow it. But now, every decision is in their hands. And so I think that can be really difficult.

For example, if that happened in America, there’s so much you would have to think about – a whole new level of decisions and freedom. And I think that’s one thing that people struggle with. They think, ‘can’t you just tell us what we’re supposed to do?’ But [in Rojava], they’re really earnestly trying to figure it out. I think that’s something that is so inspiring for the rest of the world to see; how this is a true form of direct participatory democracy and people are working on the solutions together. Maybe they’re not experts, but they’re figuring out solutions at the smallest level… and I think that’s incredibly interesting.

Tom is part of the Shoal Collective, a cooperative producing writing for social justice and a world beyond capitalism. Twitter: @ShoalCollective