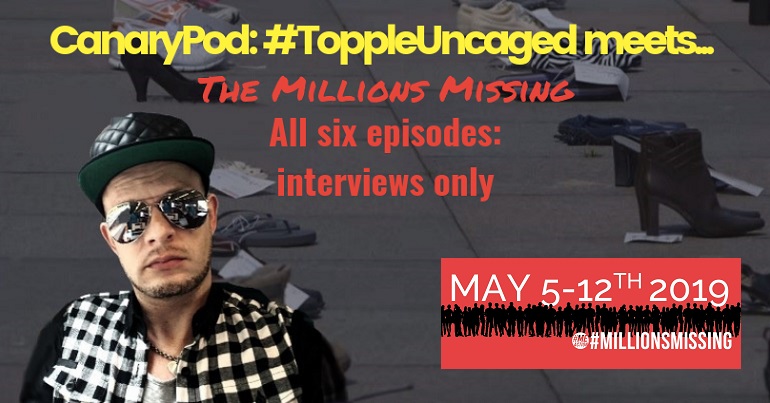 Every week, The Canary will be bringing you a new podcast on the media landscape; hosted by me, Steve Topple. But last week was different. Because it was both Millions Missing and ME Awareness week. So The Canary and I brought you content across seven days.

So to support both groups and raise awareness of ME, I published six podcasts with six different guests. Below, you can find each of the episodes with just the interviews only. Because many people living with ME have both aural sensitivity and cognitive impairment, it’s often important to them to have just talking without any external sources, like music. So here are my stripped back podcasts.

Episode one was with campaigner and mother of a child with ME, Tina Rodwell. We discussed how the disease affects children, how government departments deal (or don’t) with them and their families, and the countless barriers and prejudice they face:

Episode two was with practising doctor, author and campaigner Dr Sarah Myhill. She has been a consistent advocate for people living with both ME and the also deeply misunderstood chronic fatigue syndrome (CFS). She has written several books and is a seasoned speaker on the disease. We discussed what she thinks ME is, her treatment approach, her campaign called MAIMES, and why she thinks the disease has been subject to such scandals:

Episode three was with author, charity founder and campaigner Jessica Taylor-Bearman, who also lives with severe ME – one of the most misunderstood and under-reported aspects of the disease. We discussed her groundbreaking book, A Girl Behind Dark Glasses, what severe ME is like, the medical profession, and her hopes for the future:

Episode four was with activist, campaigner and mother Nicola Jeffery, who is also my partner. She lives with multiple chronic diseases, illnesses and conditions. The discussion is around a lifetime of medical misdiagnoses, classism, misogyny, and abuse by the state and society:

Episode five was with campaigner Wilhelmina Jenkins. She has lived with ME for over thirty years and recently wrote for ME Action Network on her experience as an African American woman. We discussed the intersections of ethnicity and the disease, why the medical profession still neglects the BME community more than others, and her hopes for the future:

Featured image via ME Action Network and The Canary