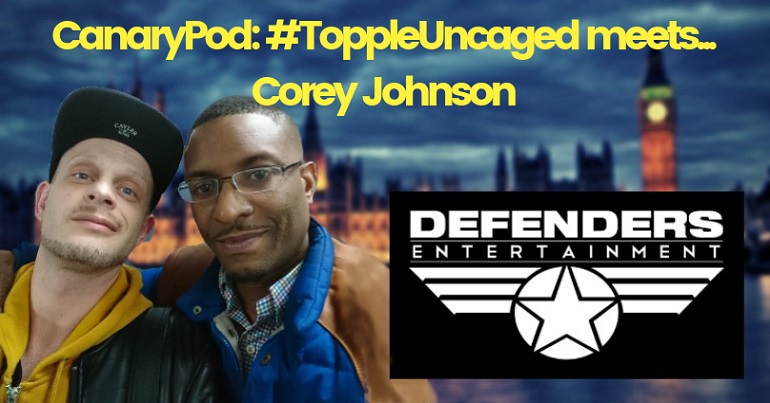 THIS PODCAST CONTAINS LANGUAGE AND CONTENT SOME PEOPLE MAY FIND OFFENSIVE. THE VIEWS EXPRESSED IN THIS EPISODE ARE THE OPINIONS OF THE HOST AND GUEST.

Every week, The Canary will be bringing you an innovative podcast for the media landscape; hosted by me, Steve Topple. I’ll be giving you the hottest, most relevant political takes. Then I’ll mix it up with some of the freshest, most banging music around.

My guest on this special episode is no exception to either of those rules, with his groundbreaking record label Defenders Entertainment (Defenders Ent).

Corey Johnson is a business person, musician, charity founder and boss of several companies. This includes the record label Defenders Entertainment. Its approach of promoting new, undiscovered young musicians has earned it respect in the UK music scene. It’s also scored it some very talented artists. So, I caught up with Johnson for the #ToppleUncaged podcast at the Defenders Ent studio in south London. We discussed his background, the stigma surrounding BAME music (drill in particular), the current state of the music industry and his hopes for the future.

Johnson’s business ‘hub’ is on a small industrial estate between Bermondsey and Deptford. From the outside, it looks like a shipping company’s office. But once through the doors, you find something completely different.

It’s home to Defenders Ent and several of Johnson’s other ventures. But the building centres around the creative arts. He has literally built an entire media centre. The space boasts recording studios, a film studio you can drive several cars into, editing suites, office, leisure space and more. What first struck me was that it was a hive of activity late on a Friday afternoon. A young drill artist had just laid down a track; GQ Magazine was there to record an interview; producers were moving between studios, discussing the latest acts.

But I also felt a sense of warmth and family. It’s something which is crucial to Johnson’s overall vision of creating a one-stop shop and safe space for artists to flourish.

Johnson grew up in Brixton, and as a child was a recording artist in his own right.  A career in events management followed, as did another stint as a rapper. But Johnson came into his own when he decided to move away from the spotlight to work behind the scenes. As his website states, by 2007:

The eclecticism he grew up around in Brixton seems to have rubbed off on Johnson. Because the list of artists whose careers he has been involved in is impressive: Tinie Tempah, Headie One, Stefflon Don, Jessie J, Stylo G and Crazy Cousinz to name a few. This eye for talent is one of Johnson’s most crucial skills. But so is his ability to engage with ‘youngers’ who some people might dismiss as trouble.

Putting his own experiences into practice, he actively promotes artists the rest of the music industry would probably dismiss. Often it sidelines them due to lack of education, the postcode they come from or stigma surrounding young BAME kids. But for Johnson, these are exactly the voices that need to be heard. The media often dismiss their experiences. When in reality, their voices and stories could change the lives of countless other people.

Drill music, for example, has been given a bad reputation by politicians and the press. They have partly blamed it for growing levels of violent crime in London. Of course, there is little hard evidence of this. This notion is just based on people’s political agendas and also their own prejudices. Not that weaponising BAME music for political ends is anything new. From jazz to rock ‘n’ roll, via hip-hop, garage and grime, the establishment has often used music to beat down BAME and working class communities.

Johnson and Defenders Ent aim to challenge and change this.

A perfect example of this is the latest track from artist Anon, featuring the Grime Violinist. Called Medicated, Anon discusses the mental health challenges he and others face. A grime artist discussing a subject like this? Now that’s not the image of underground, urban music politicians that the mainstream media would like you to see:

It’s bridging divides that Johnson believes is crucial for young people’s futures. He’s created a space where people feel inspired, important, and moreover, safe. Government and its agencies stopped trying to provide this in working-class communities many years ago. But he also offers hope. Johnson and Defenders Ent show young people that, despite what the state and the system may try to do to them, there are positive, productive and rewarding things that they can turn their negative experiences into.

Johnson is a pioneer. But he’s also passionate, warm and friendly. He plans to extend his business hub into smaller ones across London, trying to reach as many communities, isolated by the state and society, as possible. All power to him for doing so, because he may literally be changing countless young people’s lives.

Find out more about Johnson and Defenders Entertainment. Follow him and the label on Insta.