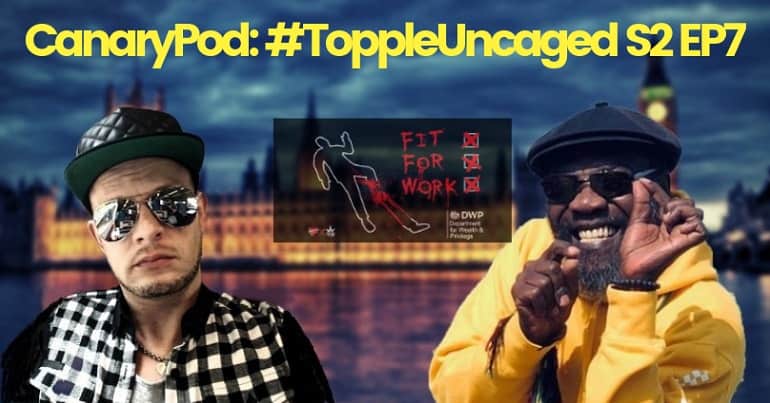 This week’s guests? Graffer-activist VOID ONE talking about his and The Hemp Trading Company’s (THTC) Fit for Work campaign, and reggae royalty Clinton Fearon.

For THTC, business is personal. It’s not simply enough to put a clever, cutting anti-establishment slogan on a t-shirt, and not back it up with action. The Tory Government’s disdain that it has shown for the last ten years towards the sick and vulnerable, has angered us immensely – and we’ve been waiting for the right opportunity to strike back in our own way. Void One approached us with his ‘Fit for Work’ campaign last year, during his ‘spree’ and we were waiting for the right time to launch. Ashwin, director of digital at THTC, was actually the ‘lookout’ for when VOID ONE launched his attack on the DWP building. While we’re rubbish at keeping an eye out for the cops, we’re much better at printing up ethically-sourced sustainable t-shirts – and after all, the medium is message. When we heard of Ruth’s plight – a personal friend to the THTC team, we had to step up the gear and launch into action – not just for her, but for the many others who continue to suffer and will suffer further under a Tory Government.

Find out more about THTC and VOID ONE’s Fit for Work campaign.

Pre-order the t-shirts here and buy the stickers here.

Read more about THTC and VOID ONE.

YOU tell ME YOUR views on the biggest stories 😤#ToryLeadershipElection? #ChukaUmunna?
REPLY TO THIS TWEET & I'LL READ THE BEST OUT ON SUNDAY ⬇️ RT PLS! pic.twitter.com/b2glgOVoFk

Find out more about Fearon and follow him on Insta.

Monster Mash by Bobby “Boris” Pickett and Cryptkickers via galaxyguy111

You’re So Vain by Carly Simon via CLJ Sounds

Ghosts of Grenfell by Lowkey featuring Mai Khalil via Lowkey