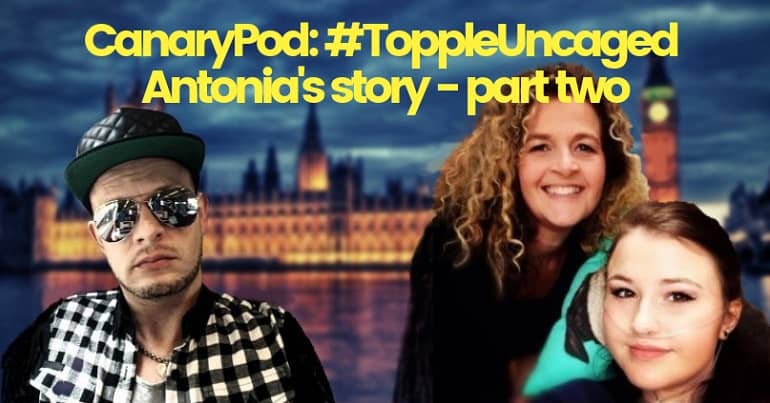 THIS PODCAST CONTAINS LANGUAGE AND CONTENT SOME PEOPLE MAY FIND OFFENSIVE AND UPSETTING. THE VIEWS EXPRESSED IN THIS EPISODE ARE THE OPINIONS OF THE HOST AND GUESTS. THE GUESTS GAVE THEIR FULL PERMISSION FOR SHARING THIS INTERVIEW.

In the second of two special episodes, I meet Victoria Cheney, mother of Antonia Payne-Cheney.

Her daughter’s story about battling chronic life-threatening illness, the NHS and the state is remarkable. It is one of hope, trauma, resilience and a family’s love.

I spoke to Victoria at length about Antonia’s journey and her current situation. She went from being an outgoing, active teenager to almost dying several times. Along the way were countless diagnoses and, what they both feel is clear medical neglect. You can listen to the second part of my exclusive interview below. Also, click here to listen to the first part.

Continue reading to find out more about what has happened to Antonia and how you can get involved.

In article one, I discussed Antonia’s story. You can read in more detail about the multitude of illnesses that she lives with, including hypermobile Ehlers-Danlos syndrome (EDS), mast cell activation syndrome (MCAS), postural orthostatic tachycardia syndrome (POTS), gastroparesis and craniocervical junction syndrome:

It is hard to express the levels of “trauma” (as one psychiatrist put it) that medical professionals and the state have subjected Antonia to. Her illnesses have been ignored; care packages abandoned; experts in her illnesses not listened to; branded as a ‘drug seeker’; and her mother accused of making up her conditions. It has gone as far as Antonia accusing one consultant of physical assault. She now lives with post-traumatic stress disorder (PTSD) due to her experiences.

It is perhaps best to let Victoria’s voice speak about this. Below is an extract from an email she wrote to Baroness Blackwood. Victoria gave permission for The Canary to publish this. Blackwood is parliamentary under secretary of state at the Department of Health and Social Care. She also lives with EDS.

As Victoria said to Blackwood:

You wrote… imagine being pushed from pillar to post with no one knowing what is wrong with you – steadily getting worse – that is so true – but imagine having that experience – being diagnosed by experts and being treated – getting on a path to better health and wellbeing and then due to a system acting wrongly – having your protocols by those experts and treatment plan taken away.

There being an insistence that you attend a hospital that not only does not accept the illness exists but actively blocks all referrals to other hospitals – a hospital that… made you really ill from their lack of understanding and states that they do not care about your quality of life.

A hospital where you were assaulted by [a] consultant overseeing you but their legal team and senior clinicians have made it impossible for you to… [bring] a case despite you reporting [it] to the GMC [General Medical Council], police and safeguarding.

Imagine having been treated so badly with your EDS – bullied in the extreme having to fund raise for lifesaving surgery abroad not available here because you were advised that [it] would be the only way to stop your symptomology which was now [that] you could not see, hear and had respiratory arrests daily – by Professor Rodney Grahame and surviving only to return to this country with a refusal to follow the care plan which had allowed you to stand up for the first time in five years.

Told that after only two months out of the country that you have to repatriate into the NHS and that you no longer had a prescriber as you were to[o] complicated for your consultant. Leaving you to get really ill because they will not prescribe your seizures medicines or nutrition which expert EDS/Chiari specialists stabilised you on.

Imagine due to your need for your pain to be addressed you being branded a drug seeker and every time you end up critical – due to failure by the hospital who do not accept your illness, when they are questioned why you were in hospital they do not state that it was due to a raging untreated infection, or deficient nutrition that has caused status epilepticus and the need to be incubated – instead they state that you are seeking opiates and to put you in even more danger… an alert is put on your name so that this is the first thing someone sees.

Imagine every experts’ recommendations being ignored over the years resulting in 92 lots of sepsis as they would not follow Professor Khullars plan due to local protocols and then being told that EDS does not cause pain even though she has tethered chord and has had major catnip cervical surgery.

Left of all pain relief, nutrition and left feeling life is not worth fighting due to the abuse you receive. This is my daughter Antonia’s story – she is amazing – she is a fighter but she needs help. Complaints and concerns raised just lead to loss of care and at the hands of the CCG [and] hospital that she is under.

She is suffering at the hands of major institutional bullying and so am I. Why? Because she has a rare illness and mistakes have been made which are being covered.

The Canary approached the following for comment, asking them to respond to specific allegations made in the podcast. We also asked them to give an overview of their position on Antonia’s case:

We are unable to comment on detail about individual patients as this would breach the right of the patient to confidentiality about their medical condition and treatment.

The patient’s safety and wellbeing remains our priority. We are continuing to work with partners, the patient and her family to ensure her ongoing care meets her needs in the safest way possible.

We are unable to comment on an individual patient’s care plans as this would breach the right of the patient to confidentiality about their medical condition and treatment.

I would like to emphasise that decisions taken about any individual patient’s care are taken in the interests of that patient by the clinicians who are looking after them, based on their expert clinical knowledge and training after appropriate discussions with the patient.

We are in touch with the patient’s mother, and would welcome the opportunity to meet with her. We are also in the process of responding to her concerns raised to the Trust via the complaints process.

Both of these comments left Victoria unimpressed.

The whole situation is tragic. Not least because Antonia is a wonderful, gifted and independent woman who will not give up:

This is a video i made this evening, about some of my ideas about goals and the cross over between what we want and what we have! please watch 🙂 i hope you like it, i spent lots of time writing it!:) love from Antonia! <3

As she said in an email, given to The Canary with full permission to publish:

I have taken an abhorrent amount of neglect, malpractice, bullying, intimidation, lies and threats from the people who claim to be my ‘care team’.

I have been left in extremely clinically risky situations continually and i have asked that these are addressed – only to find that they have not been.

I will not be allowing my mental and physical health and well-being to be abused any longer.

But also, after her surgery in Spain, Antonia was making good progress. So much so that she competed in – and won – a national cheerleading competition:

I’m a journalist, but also the partner of someone who lives with many of the conditions Antonia does. My partner is also someone the NHS and agencies of the state have subjected to years of abuse, neglect, medical misogyny and wilful cruelty. I often think I’ve seen the worst of this. Yet, Antonia’s story still left me shocked.

As we discussed in the podcast, there a numerous reasons why medical and professional organisations would act like this towards a life-threateningly ill young person. Some of it is medical professionals’ lack of knowledge. Some of it is due to arrogance and egos. And some of it relates to the covering up of mistakes. Other factors also include systems failures.

But overall, one of the main issues is the NHS is simply not fit-for-purpose for so many people living with complex, multi-systemic chronic illnesses.

The end result of all this is heart-breaking, harrowing stories like that of Antonia. She’s now stranded, seriously ill, in Spain with no hope of coming home on the horizon. When the NHS was first conceived over 71 years ago, this surely cannot have been where its architects thought it would end up.

Read more about EDS from Ehlers-Danlos Support UK and support the organisation.

Write to your MP and Baroness Blackwood about Antonia’s situation.

A song for ME: Blowin’ in the Wind via Robert Saunders: