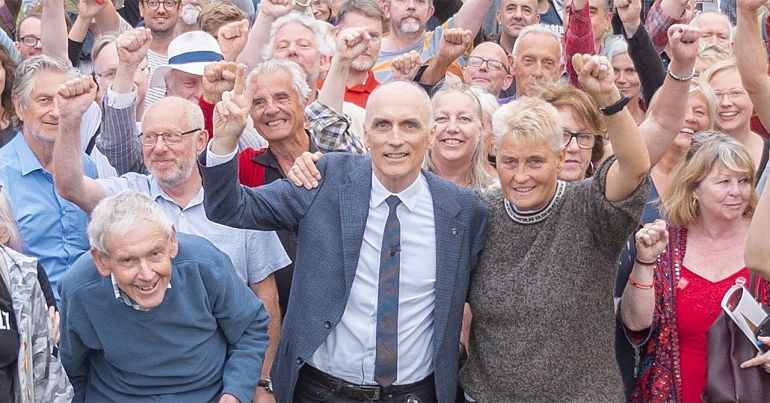 A campaign of harassment, abuse and threats has failed to prevent an event with Chris Williamson MP. A total of three separate venues cancelled bookings for a discussion about socialism and inequality in Brighton.The first cancellation was by Brighthelm Church and Community Centre, after an intervention from Labour MP Peter Kyle. The second cancellation followed ‘abuse’ and ‘threats’, directed at the Holiday Inn staff in Brighton.

In order to avoid a repeat of the interventions, abuse and threats, event organiser Greg Hadfield told The Canary on 7 August, he would keep the third venue secret until the last minute. However, The Canary has since learned that the third venue, Friends Meeting House owned by Quakers, also ended up pulling out. But in a victory for free speech and anti-racism the event still went ahead.

Williamson previously told The Canary the event would go ahead even if it was to be held in the “open air”. And on 8 August, that’s precisely what happened:

Tony Greenstein, a former Labour Party member who is among the many victims of a Kafkaesque disciplinary process, also attended the event.

We lost our final backup venue [on 8 August] so we decided to hold an outdoor meeting with PA equipment at Regency Square. Over 150 people turned up and it went brilliantly 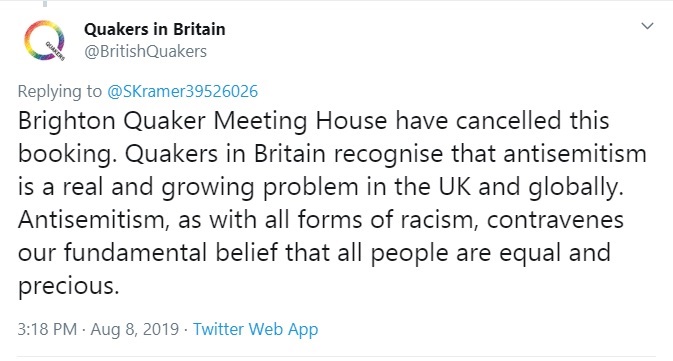 All forms of antisemitism, like all forms of racism, are a very real scourge on our societies and must be defeated. However, it appears the cancellation followed “threats of violence” against Friends House. An email posted online, from the head of communications of Quakers in Britain, said they will be issuing a statement “over the weekend or shortly after”.

Recently cancelled @DerbyChrisW Brighton meeting: Quakers state emphatically this was due to threats of violence. This the extent to which those making false claims of #antisemitism will go. This is fascism. https://t.co/88LJCoTmtE

A daughter of a holocaust survivor spoke and asked all those who were Jewish to come forward and stand besides Chris.

The moving moment at our meeting in Brighton when people of Jewish origin were called up by the daughter of Holocaust survivors to stand in solidarity with Chris.#IStandWithChrisWilliamson pic.twitter.com/KBCAVxqyL7

Greenstein ended by saying his “lasting impression” was that “this was a historical meeting which defied the establishment which tried to shut the meeting down”. The fact that this event has withstood three separate venue cancellations is testament to the fact that true advocates for democratic change refuse to be cowed.