The DWP just lost a humiliating court case. The compensation floodgates are open for thousands. - The Canary

The Department for Work and Pensions (DWP) has just lost part of a major court battle, the first defeat for its controversial Universal Credit reforms. The case could already have implications for up to 15,000 people, who solicitors say should be compensated.

The case centred on the loss of benefits for two claimants, known only as TP and AR, when they moved onto Universal Credit. Because this new benefit from the DWP replaces most previous ones, some disabled people with severe impairments could lose out on money. Their solicitors Leigh Day argued that the DWP had acted unlawfully by not making up a loss of £178 a month for TP specifically, when he changed over from his old benefits to Universal Credit.

And the judge in part agreed.

They ruled that the arrangements for the delivery of Universal Credit for severely disabled people are “discriminatory” and “unlawful” on ground three of Leigh Day’s case; that is, that the:

implementation of universal credit and the absence of any ‘top up’ payments for this vulnerable group as compared to others constitutes discrimination contrary to the European Convention on Human Rights [ECHR]. 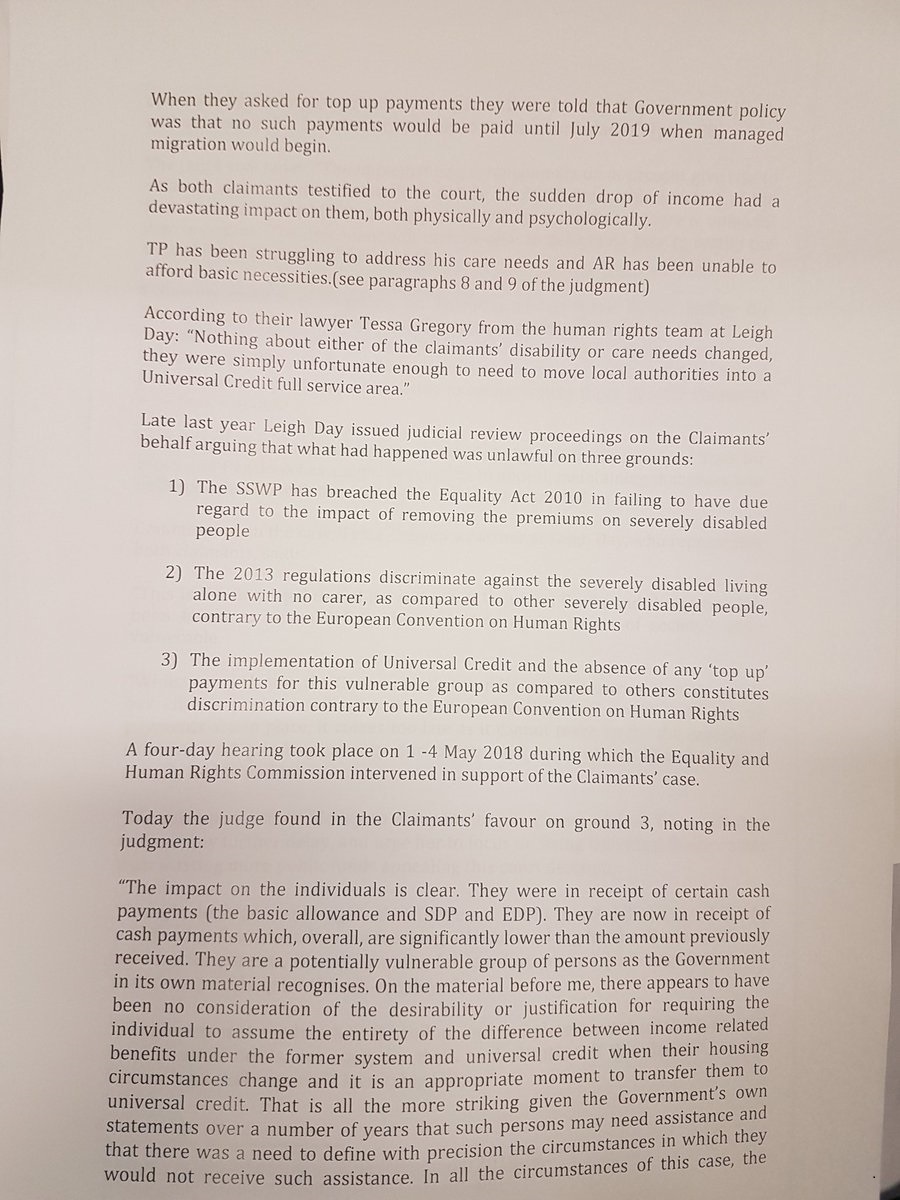 The judge in the case said:

The DWP has already changed its policy around Universal Credit, to ensure disabled people with severe impairments are no worse off. Anyone who did previously lose out will have their benefits backdated. But this doesn’t cover people making new Universal Credit claims. And Leigh Day argued that the DWP should “compensate” people previously affected, and “halt” the rollout of Universal Credit, as it’s “not working”: 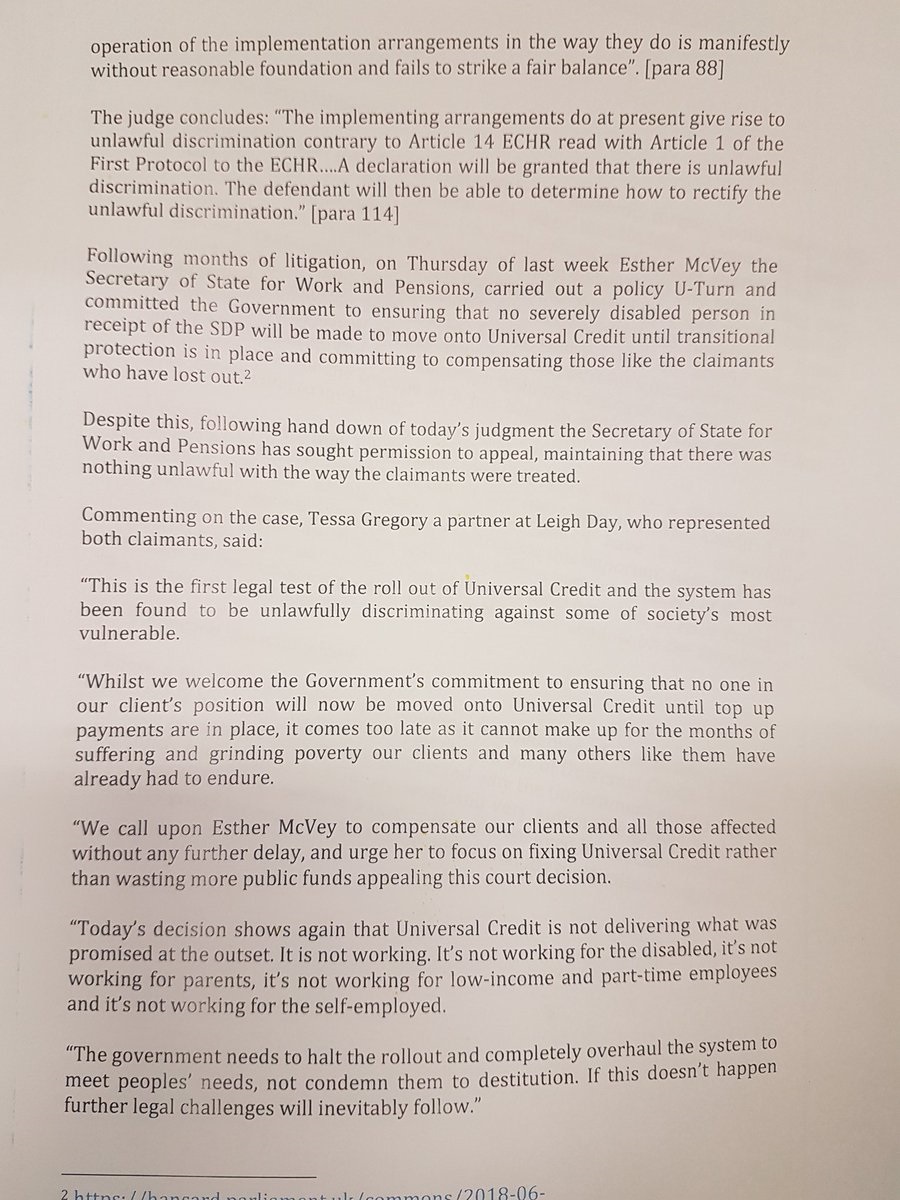 The judge dismissed Leigh Day’s two other claims against the government. But according to Inclusion London, he refused to let the DWP appeal the ruling.

The court found in our favour on three of the four points raised by the claimant. We will be applying to appeal on the one point the court found against the Department.

This Government is committed to ensuring a strong system of support is in place for vulnerable people who are unable to work. Last week, the Secretary of State announced that we will be providing greater support for severely disabled people as they move onto Universal Credit. And we have gone even further, by providing an additional payment to those who have already moved onto the benefit.

The Canary first reported on the situation surrounding the benefits in question – Enhanced Disability Premiums (EDP) and Severe Disability Premiums (SDP) – in October 2017. These benefits currently give [pdf, p1] around 1.4 million disabled people with high support needs additional money. But under Universal Credit, neither [pdf p3-4] payment exists. Instead, claimants get different allowances depending on their circumstances.

The DWP claims it will be putting in place “transitional protections“. In theory, it will ensure “some” existing claimants do not get less when they ‘migrate’ from their current awards, such as Employment and Support Allowance (ESA), onto Universal Credit. It will work by the DWP “topping up” people’s Universal Credit payments. But there were several problems with this, before the DWP’s changes on 7 June:

None of this applies to new claimants, and people who had a change of circumstance. It is the latter that happened to TP and AR.

“The government has acted unlawfully”

As his solicitors Leigh Day noted, 52-year-old TP is terminally ill, living with non-Hodgkin’s lymphoma and Castleman’s disease. In November 2016, the DWP started paying him EDP and SDP. This was because he lived alone with no support. But on his doctors’ advice, he moved to London.

Because he had a change of circumstance (his address), he had to make a new claim to the DWP. But the benefit was Universal Credit. Leigh Day claims TP then lost £178 a month because he no longer got EDP and SDP, and because the DWP did not provide any transitional protections.

We believe that by taking away these essential benefits… the government has acted unlawfully.

For my client… the additional benefits are quite literally a lifeline. At a time like this he should be focussing on his health not worrying about his benefits being axed… We believe the safety net… is being unlawfully eroded by the way Universal Credit is being introduced.

The tip of the iceberg?

But as The Canary previously calculated, a case like TP’s may be the tip of the iceberg. Because:

What’s more, the DWP previously tried to pass the buck onto local councils by saying SDP was “care costs” to be picked up by the “social care system”. But as The Canary detailed, it is unlikely councils will do this.

In response to a previous article, a DWP spokesperson told The Canary:

Importantly, those people who are moved onto Universal Credit will not see their benefit reduced.

This, according to today’s judgement, is simply not the case. With 15,000 people who previously got either EDP, SDP, or both already having moved [pdf, p1] onto Universal Credit, the DWP has already had to review some these people’s claims; specifically those with SDP. Now, with the judge ruling that the DWP’s previous policy was discriminatory and unlawful, it could open the floodgates for thousands more people to fight for compensation from the department.

This article was updated at 2.40pm on Thursday 14 June to include a statement from the DWP.