Amid accusations of 'bribery', Theresa May knights a Brexiteer MP who didn't revolt - The Canary 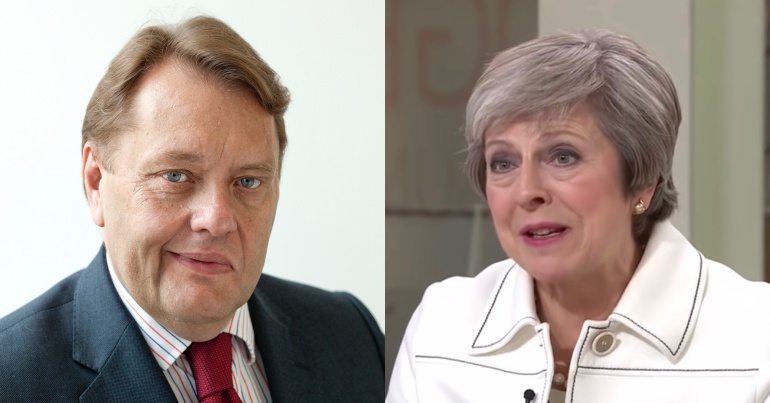 On 23 November, Downing Street announced a knighthood for Conservative MP John Hayes. This followed an article in the Times, claiming there was speculation Hayes may soon be “granted a knighthood”, if he remained loyal to Theresa May as prime minister.

According to Tim Shipman’s article, one MP said:

The whips are offering bribes of knighthoods and peerages to get people to go around telling people to back the prime minister or we will get Corbyn.

A tweet from Shipman put news about Hayes’ knighthood and his Times story side by side:

In fact, quite a lot of people noticed the “coincidence” between the timing of his knighthood and the recent Brexit chaos:

Fancy that. No10 has, out of the blue, just given long standing eurosceptic Tory MP John Hayes a knighthood. Two unrelated facts: he didn't sign a no confidence letter, and hasn't yet said he'll vote down the Brexit deal.

By complete coincidence, John Hayes is one of the MPs who's been thinking about voting down her Brexit deal https://t.co/iXq6Y6zp8G

Apparently, it also drew criticism from some Conservative MPs:

Conservative MP reacts to Brexiteers former minister John Hayes getting s knighthood from Theresa May: “Another nice and easy thing to try and defend on the doorsteps. When we go into No.10 we’re told perception is everything. You couldn’t make it up.”

While others spoke out about Hayes’ ‘principles’:

Tory MP Crispin Blunt says he is “delighted” at John Hayes’s knighthood, adding: “Very pleased assured me in terms on Tuesday he would be opposing the PM’s EU withdrawal Deal. His deep attachment to principle will certainly mean there has been no change in that position.”

According to several reports, Hayes is a known Brexiteer but hasn’t submitted a letter of no confidence in May’s leadership.

"It would be a spectacular act of desperation for Theresa May to be giving away knighthoods in a bid to win votes for her botched Brexit deal.” – @ChrisM4Chester https://t.co/n8wc7klps5

Labour MP Jo Stevens also said it “stinks of cronyism”. Meanwhile, others argued it raises issues about the very nature of the honours system:

John Hayes is being knighted by Theresa May outside of the official honours list for services to her pathetic #BrexitDeal,this is bribery, blatant bribery, this PM has totally in her time in office debased the value of public service, she's an utter disgrace, #ToriesOut

Earlier this month, Hayes called for the government to reintroduce the death penalty. And he’s consistently voted against gay rights, human rights, and any increase in benefits. So, some people called his appointment a disgrace:

John Hayes – anti choice, pro death penalty, Europhobe – has been given a knighthood by May.

This stinks. It is a gross abuse of the honours system and devalues those honours awarded to people for actually achieving something in life, rather than being a career Tory asshole.

But, even if people are right about May’s “cronyism”, it may not be enough to get her Brexit deal through and, ultimately, cling to power. Especially since there seems to be very little loyalty left among the Conservatives.

Featured images via Department of Energy – Flickr and screengrab