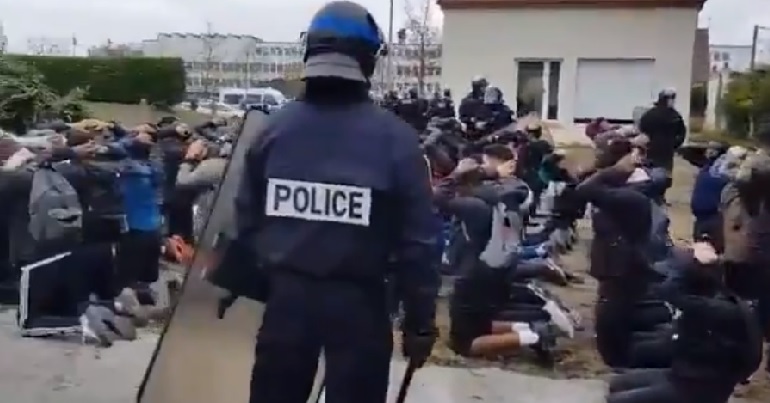 France’s neoliberal government is currently facing a mass public uprising. Anger against the country’s elites and out-of-touch politicians has led people to take to the streets in pursuit of change. Although the vast majority of France supports the protesters, the police have all too often responded with violence. And now, some very worrying images have been coming out of the country.

Demonstrating students were protesting against government changes to the education system when police decided to crack down. As the BBC reported, the authorities forced the students to “kneel in dirt while facing brick walls”.

One Paris councillor called the scenes “frightening”, “humiliating”, and “unacceptable”.

And the images are indeed very disturbing:

Just as Spain did with Catalonia protesters, France is starting to get extremely aggressive & authoritarian in suppressing domestic dissent: France protests: Footage of students humiliated by police https://t.co/mEo6N6c2HN

The police claimed they suspected those they arrested of participating in an “armed gathering”.

There are more protests across France on 8 December, even though the government has responded to protests by cancelling a controversial tax rise which sparked unrest in the first place. Some of the additional demands of protesters are greater taxation of wealthy citizens, a higher minimum wage, and more taxes for multinational corporations. As Greenwald pointed out:

It is about people’s dignity. It is about a section of society, many of whom live in France’s rural 'peri-urban' communities, that feels lost and left behind, when opportunities are in Paris." https://t.co/i75DtDILIQ

Macron is the embodiment of neoliberalism and corporatism & he's become hated in a short time. These protests are teaching the same lessons as so many other countries: what's being rejected (& supported) is not one party or ideology but the ruling class: https://t.co/Cl64QaDCjS pic.twitter.com/FhLzO4zphM

And as Christina, a teacher from Paris, told the Guardian:

[The protesters] are people like me, trying to get by on small salaries while the cost of living keeps rising. It’s not normal that working people cannot live well… [President] Macron needs to wake up to this – he’s giving tax breaks to the rich while the ordinary Joe in the street like me can barely afford the basic necessities in life. Something has to give.

With worrying scenes of police brutality and authorities forcing students to kneel, it looks likely that protests will continue. The ruling elites are clearly scared – and rightly so. Because ordinary people in France are taking matters into their own hands. And no amount of state violence will be able to shut them up.