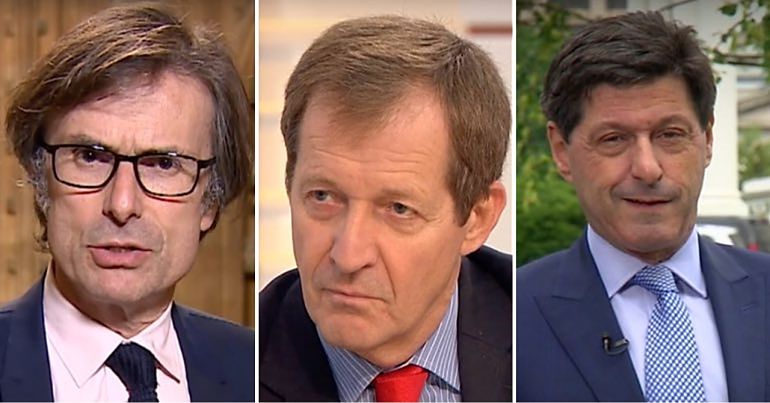 For many, Alastair Campbell’s expulsion from the Labour Party is long overdue after his role in the Iraq war. Instead, his undoing was confessing to voting Lib Dem at the European elections.

But Campbell’s had plenty of support since the decision. And two defenders who’ve ridden to his aid are Robert Peston of ITV News and Jon Sopel of the BBC.

What Campbell did wrong

An outspoken critic of Corbyn’s leadership of Labour, Campbell was asked by the BBC which way he voted in the European elections:

I voted Liberal Democrat. I didn’t vote Labour for the first time in my life.

For this, the party expelled him (a decision Campbell says he will appeal). Labour’s press team clarified:

To be absolutely clear, the way Labour Party members vote is a private matter. But publicly declaring or encouraging support for another candidate or party is against the rules and is incompatible with Party membership.

Campbell’s protests at Labour’s decision are strange considering he recognised the potential consequences of his actions during an appearance with Jeremy Vine on Channel 5 on 20 May:

He also showed that he knew this wasn’t allowed in a previous interview with Owen Jones. Jones tweeted a copy of the Labour Party rules Campbell had broken:

And finally, to end this really silly and disingenuous debate – Alastair Campbell knew that publicly declaring he'd voted for another party would lad to auto-exclusion. How do I know this? Because we discussed it on camera! pic.twitter.com/8MgNPwR9qY

The media rushes to his defence

Many have rushed to Campbell’s defence, including Labour deputy leader Tom Watson.

But members of Britain’s media have as well. And both Sopel and Peston used similar arguments:

I've known @campbellclaret for 25 years. A more tribal, Labour to his finger-tips person you would struggle to find, yet expelled from @UKLabour with lightning speed brutality.
But anti-Semites?
Hard to avoid conclusion Labour is making deliberate choices…

antisemites, sends out the oddest of messages. Parties that are so intolerant of political dissent rarely prosper in our first-past-post system, where the coalition is the party itself

Twitter reacted strongly to what it saw as partisan commentary from key figures in the media.

Did you comment on Heseltine’s suspension last week or do you only abuse your position at the BBC to defend friends from having rules applied to them?

Bastani was referring to the Conservative Party removing the whip from Michael Heseltine for also pledging to vote Lib Dem in the European elections. This was arguably not portrayed as an unjust purge the way it was with Labour

How Labour dealt with dissent under Campbell’s watch

Mark Seddon, a former member of Labour’s National Executive Committee (NEC) and critic of British policy in Afghanistan during the Blair years, reminded Sopel of his treatment when Campbell’s team controlled Labour:

PS Labour's ex Chief Whip said that I had narrowly avoided expulsion for writing to Reg Keys, who lost his son in the illegal Iraq war promulgated by Blair & Campbell. Keys ran against Blair. I had said he was brave to do so. He put that in an election leaflet. @BBCJonSopel

Others highlighted the petty reasons the party used for some expulsions while Labour’s right-wingers still held power:

He made a full, public, televised admissions that he voted LibDem. In a world where party members were expelled for retweeting Caroline Lucas, or saying on Facebook that the "F***ing love the Foo Fighters", bragging about this was Campbell's downfall, not the doing of it.

Was there media outrage when Labour’s shadow chancellor John McDonnell accused the right of the party of conducting a “rigged purge” of Corbyn supporters prior to the 2016 leadership election?

And Seddon clarified why Campbell’s expulsion was so rapid:

It is called 'automatic exclusion'. Been in the rule-book since the party's inception. What isn't promotional about telling all & sundry what he was doing — and on the BBC which he spends most of his time attacking for 'bias'? Come-on, Robert @Peston , raise your game.

Campbell, a friend of the media?

Others have speculated about why such journalists seem so fond of Campbell:

Jon Sopel casually acknowledging there's a chumocracy at the top of our media and politics.https://t.co/hoUVCSORi6

Former Labour MEP David Hallam gave some insight into the friendly relationship Campbell had with the press. He highlighted an incident involving him that actually appears in one of Sopel’s books:

I'm not that exercised about Alastair Campbell leaving the Labour Party. This extract from Jon Sopel's book "Tony Blair: the moderniser", explains why. The key phrases are "private meeting" and "feeding tit-bits to the press". As I left that meeting Campbell said "that's Hallam" pic.twitter.com/GsKz2HlqLn

The media’s rehabilitation of Campbell

Writer Tim Holmes argued in a 2012 openDemocracy article, Britain loves a war criminal, that after Campbell’s role in the Iraq war he should never have been welcome in the media again.

And yet today, senior broadcasters are defending him for undermining his own party, and have completely forgotten his role in Iraq.