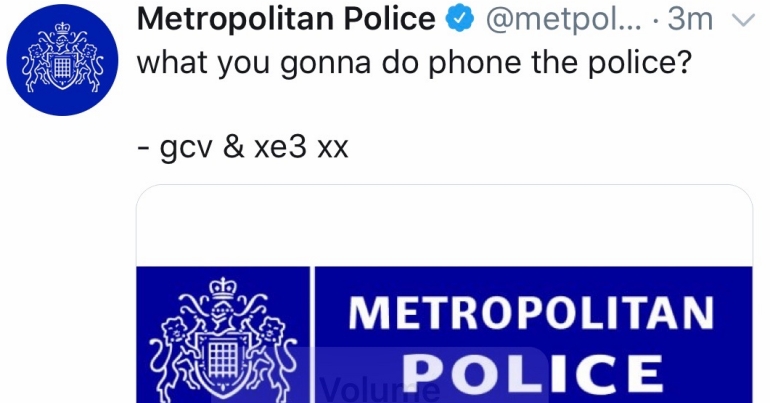 On 19 July, the Metropolitan Police’s website was targeted by hackers who posted a series of tweets from the force’s official Twitter account late on Friday night. The account has more than 1.22 million followers. Some called for the release of drill rap artist Digga D. Others simply said: “fuck da police”.

As news spread of the Met takeover, many people celebrated the online posters:

😂😂😂😂 whoever did this to the Met Police twitter are legendary pic.twitter.com/TLYjnSXYST

It just had to be done… Met Police have provided me with my new Twitter banner 😂 pic.twitter.com/4q9PurWaLO

Clearly, those ‘in charge’ had a wry sense of humour:

Broadcaster Jeremy Vine asked what this meant for national security:

The mystery posters also put out news on the Met Police’s website:

Never has not being able to sleep been so wild as it looking very much like the Met police just got hacked! #MetPoliceHacked pic.twitter.com/sKDPUSOXtJ

Met Police are on a different vibe now😂😂😂 pic.twitter.com/s10XZ4QzGg

As Vice reported, eighteen-year-old Digga D’s tracks were removed from YouTube in 2018:

as part of YouTube and the Metropolitan police’s attempts to reduce the number of drill videos circulating online (they were immediately re-uploaded onto fan channels, where they remain). Months after the controversial but wildly popular underground genre piqued the discerning interest of British media outlets and law enforcement in April 2018, Digga was handed a CBO, or Criminal Behaviour Order’, in court.

As a result, Digga D has to pass any music he makes to the police for approval first. He’s also “forbidden from entering certain parts of London, or hanging out with particular individuals in public”. As Digga D said:

They used [our music] against us… played all of our videos in court. They had a police officer there, who literally calls himself the ‘drill expert’, and says he has been studying us for three years, translating what we are saying in our lyrics to the jury.

We are aware that the @metpoliceuk has been subject to unauthorised access and our media team are working hard to delete the messages and ensure the security of the account. Please ignore any Tweets until we verify that it is back under official control. RT

Scotland Yard also denied any “hack” of its IT infrastructure. It claimed the security issue only affected its MyNewsDesk account, used to issue news releases. A statement said:

Last night, Friday 19 July, unauthorised messages appeared on the news section of our website as well as on the @metpoliceuk Twitter feed and in emails sent to subscribers.

While we are still working to establish exactly what happened, we have begun making changes to our access arrangements to MyNewsDesk.

“We apologise to our subscribers and followers for the messages they have received,” the force added. It continued:

At this stage, we are confident the only security issue relates to access to our MyNewsDesk account. We are assessing to establish what criminal offences have been committed.

In case you're wondering what's going on with @metpoliceuk:

This incident certainly does raise questions about the Met’s internal security processes. Many suspect, from the comments posted by the hackers, that a group of young people may be behind it. While The Canary would never condone any criminal activity, many people are celebrating the hackers. Not only for their technical prowess, but also for their use of humour on the Met’s Twitter account to make some serious political points.