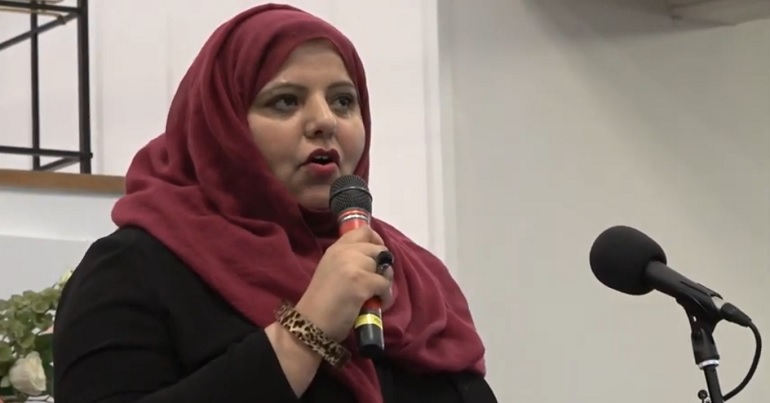 Shaista Aziz recently announced her intention to stand as Labour’s prospective parliamentary candidate (PPC) in Nottingham East. Aziz has a solid track record of community work, activism and advocacy, and has been a Labour councillor in Oxford since 2018.

Unfortunately though, as happens so often with Muslims, People of Colour, and especially visibly Muslim women in the public sphere, Aziz’s campaign has immediately been subjected to Islamophobic smears and accusations of antisemitism.

On 25 October, Harry’s Place published an article that makes Islamophobic insinuations, equating Aziz’s position on the Islamic concept of ‘jihad’ with sympathy for suicide bombers. The article was shared by the Labour Against Antisemitism campaign on Twitter, who claimed Aziz has a “track record of alleged terrorist activity & antisemitism”.

More recently, Harry’s Place published another article but the insinuations remain much the same.

However, many argued that these accusations are not unrelated to the fact that Aziz is a visibly Muslim Woman of Colour with clearly socialist politics. Samayya Afzal, from the Muslim Council of Britain, described Aziz’s experience as “pure and utter racism”:

Time and again we see Muslims who attempt to enter public life and run in elections described as terrorists, extremists, entryists, etc. Their every association is combed through to try to prove a link to condemn them. What prompts this? Pure and utter racism.

Well that didn’t take long @hurryupharry! This is what happens when British Muslims enter public & political life….how slurs and attacks manifest. I wrote clearly about sick ideology of terrorists twisting their interpretation of faith and to justify killing innocent people. pic.twitter.com/VnQjgbpKg9

THREAD: My statement on today’s smear campaign against me:
Any campaign to misrepresent my words will not succeed in silencing me. Today, Harry’s Place produced a blog where they have deliberately chosen to take words I wrote in an article in 2002 about Palestine and Israel.

Aziz said her words had been taken “out of context”. She also apologised for using any language that may have been offensive to Jewish people. And she suggested these were cynical attempts to smear her by people who simply disliked the idea of a visibly Muslim woman candidate:

I am also aware of how I’m being targeted by certain commentators on twitter who have zero interest in actually rooting out anti-Semitism & hate and every interest in maligning and smearing me as a visible Muslim woman standing as a candidate in a time of heightened islamophobia.

Support from the Jewish community

In the wake of the controversy, Aziz has received widespread support, including from members of the Jewish community:

I am gravely disappointed to see a small number of twitter users baselessly defaming my brilliant friend and colleague @shaistaAziz. If you are looking for anti-Semitism, you will have to look elsewhere.

Taking the comments of a Muslim PPC candidate out of context to fuel inaccurate, racist tropes about Islamic theology is despicable

Solidarity with the Muslim community ✊

She is not an antisemite – she is someone who supports the IHRA definition and has been an ally of Jewish Labour members, arguing against motions that attempted to minimize antisemitism in the Labour Party.

Aziz’s identity as a visibly Muslim woman cannot be removed from the smear campaign against her. People have pointed to the “dangerous” implications of such campaigns against Muslims in public space:

This isn’t just an attack on Shaista Aziz’s character for political reasons. It’s also attempts to securitise a Muslim woman, this is very dangerous front that has opened for Muslims who put their names forward in the public space.

This is a disgustingly racist piece – associating Muslims with terror is a trope just as associating Jews with money is! I can’t articulate how angry this racist campaign against @shaistaAziz is making me. They don’t want Muslims in public life, that is their goal https://t.co/Yq7YKZOkeS

Nevertheless, Aziz has the support and backing of many who see these as attempts to undermine her candidacy:

I think we have to do everything we can to get @shaistaAziz to Parliament now. She is such an extraordinarily articulate, nuanced, principled & committed person, the House would be lucky to have her.

This 👎 and @shaistaAziz get ready for more of this bigotry. You know you can take them on and win. https://t.co/qb3QjIguQi

Outlets like Harry’s Place, along with all the people who support them, will just have to live with the fact that Muslim women are here to stay. They are claiming their space in British public life, and they will not remain silent.