After the leaders' debate, Kate Hoey launched a vile attack on John McDonnell. But the online response was just perfect. - The Canary 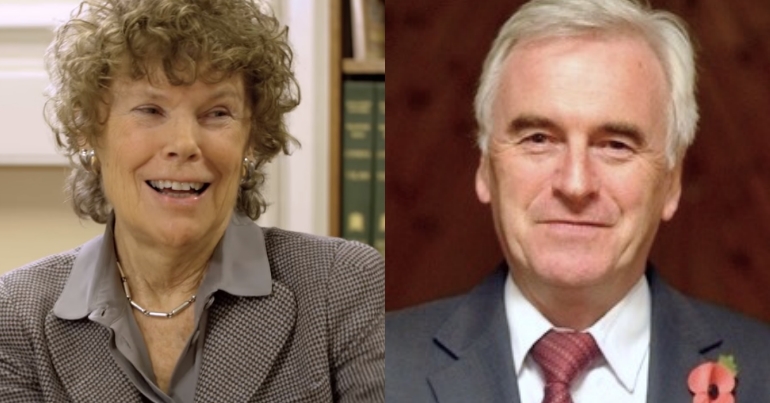 On 23 November, former Labour MP for Vauxhall Kate Hoey launched a scandalous and unprovoked attack on her former party in the Daily Telegraph. In particular, she took aim at shadow chancellor John McDonnell.

But people on social media reacted beautifully and reminded us exactly how we should remember her shameful political career.

Her record and reaction

Despite this unjustified attack, the Daily Telegraph journalist introduced Hoey as “remarkable” and “fearless”:

My interview with the remarkable, fearless Kate Hoey: John McDonnell is a 'nasty, devious figure behind the scenes', Kate Hoey warns, as she steps down  https://t.co/zJqPp5PFxM via @Telegraph

But people on social media weren’t long in setting the record on Hoey straight. They aptly summed up her shameful political career:

This is perhaps the most ingratiatingly unctuous interview with a public figure ever to appear outside the page of Hello Magazine, and really makes me wonder how this woman got away with three decades of pretending to be a Labour MPhttps://t.co/fVpUBoZHpc

There was me thinking that when Kate Hoey refused to implement Labour policies as a Labour MP, agreed by Labour members, cuddled up to Nigel Farage to help his Brexit Lobbying & supported Tory Austerity it was Kate Hoey who was being devious & nasty? https://t.co/y58mfrsaQo

Many shared their great disgust that Hoey could be remembered favourably. Some reacted by putting her comments about McDonnell in context:

Kate Hoey advised Johnson as London mayor, led the hunting lobby, said she wouldn't be upset if Cameron kicked out Gordon Brown and sucked up to Farage. Been stealing a living off Labour voters for years. She'll make a great Tory dame. https://t.co/kA4ShAl58X

kate hoey: what has the labour party come to when i, a pro-fox hunting anti-immigration MP who was once chair of the countryside alliance, no longer feel welcome in its ranks pic.twitter.com/Cpnkgt3iyG

The comments about fox hunting are important given Hoey’s shameful record of ‘consistently voting against the hunting ban’.

Others, meanwhile, couldn’t work out just how she’d remained in the Labour Party for so long: 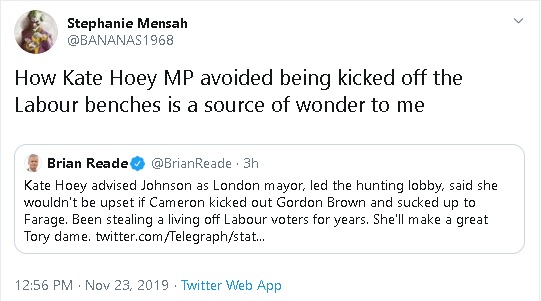 The fact I see dozen of Torys and Brexit fans paying tribute to Kate Hoey – but not a single piece from anyone in the Labour Party – or anyone in Vauxhall – tells you all you need to know.

Tell her by her friends

Supporting a party as shameful as the DUP and a person like Nigel Farage, as she did, it’s really a wonder how she stayed in Labour for so long. Add to this Hoey’s reaction to last night’s BBC Leaders Debate, and it again asks, what exactly was she doing in Labour?

What we need to remember about Hoey

Perhaps the right-wing media hoped this story may distract from Johnson’s shocking performance in the leaders’ debate. But comments made by people on social media tell us all we need to know and remember about Hoey. The company she kept and her voting record show it’s time to say nothing more than ‘goodbye and good riddance’.