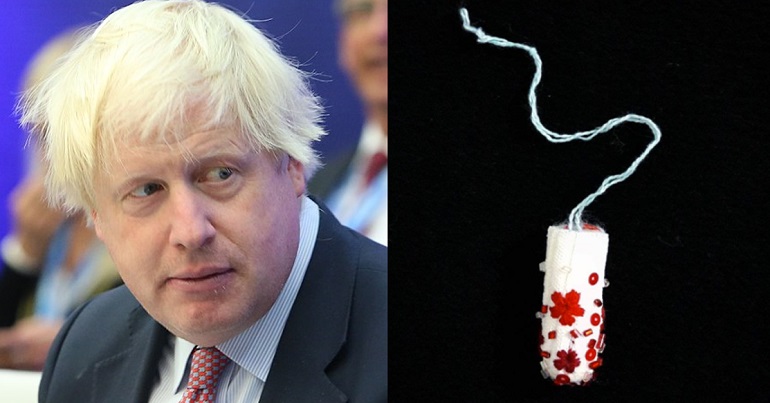 The Tory’s latest grand pledge about poverty has not washed with many people. Rightly so, as its new measures to tackle period poverty fall way short of the mark. Moreover, it’s really just sticking plasters on broken legs.

As ITV News reported, next week the Department for Education (DfE) will roll out free sanitary products for schools. The policy’s not new. It was announced by former chancellor Philip Hammond in 2019. But it’s only just got off the ground.

Under the scheme, primary and secondary schools will be able to order sanitary products. The government will fund these. Girls and young women will be able to access these products when they need them.

We know that it is not easy for everyone to access period products where and when they need them.

This scheme will deal with those problems so young people can go about their daily lives without getting caught out if they have come on their period unexpectedly, [have] forgotten to bring products with them or if they can’t afford the products they need.

Girls and women not being able to afford sanitary products is a major problem. As the website Global Women Connected noted, in the UK:

Linda Allbutt from campaign group Period Power was less than impressed. She told The Canary:

It’s an opt in service so I feel some schools may miss this. There are certain restrictions on quantities allowed set against the numbers of menstruating girls. We deliver whatever is asked and whenever it’s asked.

We feel that this is only addressing a small number of menstruaters. Many many women are isolated each month as they cannot afford the correct sanitary protection. This is absolutely a result of austerity measures and this still needs addressing. We are campaigning now to get products in all workplace toilets. [We’ve] already had some success. Toilet paper and soap are expected so why not sanitary products?

One user raised a good point about health conditions and illnesses:

For everyone moaning about free sanitary products in schools, please bare in mind all the teens like me who had endometriosis or PCOS having a place to go and get extra spare when you've already gone through the 8 tampons/pads in your bag that day will be a relief #periodpoverty

Have you ever had a heavy period and used an own brand cheap sanitary towel? You leak within the hour therefore having to change it more. There's this myth that women only bleed a tiny bit. I used to have to change my pad every hour & that was with decent ones. #periodpoverty

And, in response to some people asserting that period poverty isn’t a ‘thing’, Alex summed it up quite well:

Going through the #periodpoverty tag is great. It's lots of people being supporting of the UKs decision to make sanitary products available for free in schools.

Then there's a bunch of boomer types like "They can't afford sanitary products, BuT SoMe KiDs HaVe IphOneS".

The root of the issue

As Allbutt alluded to, the policy doesn’t really get to the heart of the issue. Because it isn’t addressing why some people are so poor they can’t afford the products in the first place. To do that, the Tories would have to deal with the following:

Tackling the root causes of period poverty is probably too much to ask of the Tories. But never mind. As Matt neatly summed up:

If men bled once a month out of their cocks, #periodpoverty would have been eroded half a century ago. Sanitary products are a basic necessity, that society should provide free for women; period!

Of course, if you’re a man you can still get free condoms. C21st equality, hey?