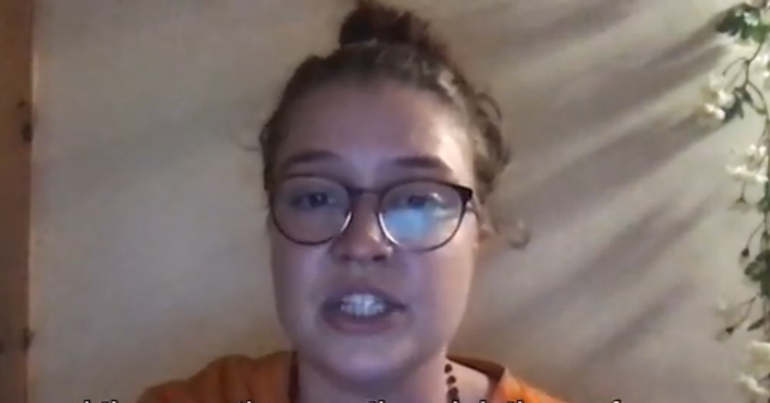 This week Julia Lister, a British Palestine solidarity activist, was arrested with a group who were on their way to the Israeli fence separating the Palestinians of Gaza from Israel.

Gaza is surrounded by a fence on three sides. Israeli snipers shoot at any Palestinian who dares to go near it. Israeli drones and F-16s patrol the skies and military boats blockade the coast.

The group of international activists intended to cut through the military fence. Their action was part of a movement called Gaza 2020: Breaking the Siege.

Several people were arrested last week for attempting to cut the fence. According to a statement from the group, their actions were:

intended to cut the fortified border fence and enter Gaza in a forceful but symbolic action to demand an immediate end to the Israeli land, sea and air blockade, which began in 2007 and continues to this day…

The people of Gaza cannot live another year under siege. It is no longer a matter of time running out. Time has already run out.

In this video, Lister explains her motives for attempting to break the siege of Gaza:

I am participating in this demonstration in order to draw attention to the blockade of Gaza as a result of the illegal siege by land, sea, and air imposed by Israel in 2007. Imports and exports are blocked, and the people of Gaza are trapped with no access to the outside world. 97% of Gaza’s drinking water supply is contaminated, electricity is shut off for 20 hours a day, and the unemployment rate is over [52%]. Over 250 Palestinians have been killed by Israeli snipers while participating in the Great March of Return, an ongoing peaceful demonstration against the Israeli occupation, and at least [47] of these were children. This is already an outdated statistic, and the numbers of innocent people murdered is likely to be much higher.

“In what world can an occupying military force trap nearly 2 million people in an open-air prison?’

The UN has predicted that Israel’s siege would make life unliveable in Gaza by 2020. Israel has launched devastating invasions of the strip in 2009, 2012 and 2014. 1,400 Palestinians were killed in Israel’s 2014 invasion. According to Lister:

In what world can an occupying military force trap nearly 2 million people (70% of whom are refugees) in an open-air prison of 360 squared kilometres, target unarmed civilians, journalists, and medics and bomb the homes of innocent children when they are sleeping whilst claiming their state is the ‘only democracy in the Middle East’ with ‘the most moral army in the world’ and get away with it? Where is the accountability? The UN, governments worldwide, and countless international human rights organisations routinely condemn Israel, but this does not seem to be enough: nothing is changing and the people of Gaza continue to suffer.

Lister concludes by calling for people in the UK to take action to end the blockade, and to participate in the Palestinian campaign for a boycott of Israel. She said:

By participating in this action, I would like to appeal to the moral conscience of my fellow British citizens. I would like to remind the people of Britain that we can start movements at grassroots level to put pressure on our MPs, urging them to change policies and withdraw our country’s blind support for the Israeli occupation of Palestine and its apartheid regime. I would like to ask them to join us in demanding an end to the 13-year blockade of Gaza Strip and the countless routine violations of international law and basic human rights perpetrated by the Israeli Government and its occupying forces. This understanding of and outrage with the situation in Gaza is vital but alone is not enough: we must absolutely refuse to be complicit in Gaza’s suffering by participating in the BDS movement which can be understood in detail by visiting bdsmovement.net.

“Without international pressure, Gaza will remain a prison”

According to Gaza 2020: Breaking the Siege:

Without international pressure, Gaza will remain a prison for those inside indefinitely.

The movement remains defiant despite the arrests:

Yesterday’s action was the first attempt to break the siege, in solidarity with the people of Gaza. We want Gazans to know that we will not give up, that we will continue opposing this illegal and barbaric siege of innocent people.

As the campaigners’ press release points out, “It’s no longer a matter of time running out. Time has already run out”. There is an urgent need for people to stand in solidarity with the people of Gaza and struggle together to end the brutality of Israel’s siege.