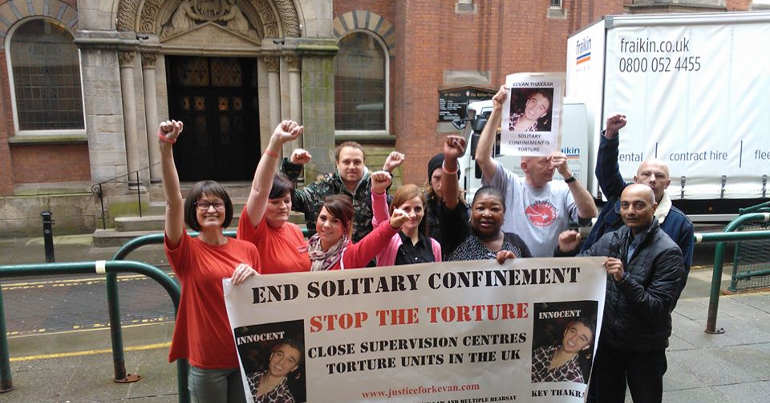 An account by the Incarcerated Workers’ Organising Committee (IWOC) claims that prison officers failed to act to stop the attempt on Thakrar’s life.

IWOC told The Canary that Thakrar has not received proper medical attention since the attack, and remains in the same prison as his attacker.

Racism in the Close Supervision Centre

Concerns had already been raised that Thakrar was vulnerable to potentially racist attacks. Thakrar’s solicitor had made a complaint about racism in HMP Full Sutton’s Close Supervision Centre (CSC) before he was moved there. According to IWOC:

Kevan’s solicitor had raised a complaint… prior to Kevan being moved onto the CSC [at HMP Full Sutton] because [Thakrar’s alleged attacker had] perpetrated racist attacks against other prisoners before.

However, the solicitor’s warnings were ignored, and in September 2019 Thakrar was moved to the CSC at Full Sutton.

December’s attack was the second assault on Thakrar in just a few months. In October 2019, Thakrar was reportedly attacked with a metal flask in what was alleged to be another racist incident. According to IWOC, Thakrar’s attacker reportedly had “links to racist extremism”.

An IWOC spokesperson told The Canary that HMP Full Sutton is still holding Thakrar alongside his alleged October assailant inside its CSC. They went on to say that:

IWOC accuses the Prison Service of failing to adequately respond to these attacks and instead subjecting Thakrar to “unofficial punishment”.

For example, IWOC maintains that Full Sutton prison has subjected Thakrar to a harsher regime since the December attack.

IWOC told The Canary that since the assault the prison has put Thakrar on a “three-man unlock” regime, meaning that three prison guards must be present to let him out of his cell. These measures are normally reserved for extremely volatile prisoners.

When questioned by The Canary, the Ministry of Justice (MoJ) press office claimed that the ‘three-man unlock’ regime was in place for Thakrar’s protection.

However, according to IWOC, the prison hasn’t subjected Thakrar’s alleged attacker to the same security regime.

The Canary contacted the MoJ and queried the medical care received by Thakrar. The MoJ responded that he “did not require outside medical treatment” after the attack.

However, IWOC maintains that Thakrar did not receive adequate medical care. It said:

The prison failed to take him to hospital [after the attack] but he was treated by two nurses on the wing.

An IWOC spokesperson told The Canary:

Since the incident, Kevan has had his healthcare neglected and [Muslim] Friday prayers stopped.

Campaigners are concerned, as Thakrar’s alleged attackers are still in the same prison as him.

The MoJ told The Canary the man who stabbed Thakrar “has been placed in a segregated area” and that “The [December] incident is being referred to the police”.

However, IWOC says that Thakrar is not safe while his alleged assailant remains in the same prison.

Furthermore, according to IWOC, Full Sutton prison is still holding the alleged October attacker alongside Thakrar in its CSC.

IWOC maintains that Thakrar is not safe. They are calling on their supporters to write to the governor and demand that:

Kevan [is moved] out of the CSC and to a safer location immediately in order that HMP Full Sutton adhere to their policy obligations.

Kevan is not safe in this prison and should not be locked up with racist white supremacists anywhere across the prison estate.

IWOC maintains that Thakrar was wrongfully convicted, and is campaigning for his release.

The UK’s highly controversial ‘joint enterprise’ provision allows people who did not strike a blow to be convicted of murder. It is often used in the courts to associate people, often wrongly, with ‘gangs’.

In 2016 the Supreme Court ruled that the law regarding ‘joint enterprise’ had been applied incorrectly for the last 30 years. Thousands of people have been convicted of ‘joint enterprise’ offences over the past decade, including a disproportionate number of People of Colour.

The alleged attacks on Kevan Thakrar happened in HMP Full Sutton’s CSC. These are high-security ‘prisons within prisons’, housing up to ten people.

According to Kevan Thakrar, CSCs are:

the English version of American supermax prisons, indefinite solitary confinement within the most oppressive and brutal environment found in this country. Psychological warfare is used upon its victims on a constant basis, with frequent physical attacks supplementing the arbitrary punishment.

CSCs are basically units where they put people who have encountered a problem or have certain issues, or they have been involved in an incident or altercation with another prisoner – it could be anything. I just feel as though they put people there to abuse them and keep them contained…

[The CSC is] like a triangular shape with cells all on one side. Five of them are high control cells where they feed you through the hatch. It is a very closed-off environment. It’s a prison within a prison. It’s not a nice place.

Major told Corporate Watch that he felt the use of CSCs was motivated by money:

Conditions at HMP Full Sutton’s CSC were branded “inhuman” by Amnesty International in 1997. At that time the unit was known as a Special Security Unit.

Kev has been in Close Supervision Centres for nearly a decade now. CSCs are like prisons within the prison, another level of torture inside these already violent prison estates. He’s been repeatedly subject to racist violence and retaliation from the estates and MoJ.

A system based on violence

The conditions faced by Thakrar are symptomatic of a prison system which is based on violence and, as IWOC put it, “blatant disregard for human life”. During 2019 government figures show that a prisoner harmed themselves every ten minutes in England and Wales. 34,112 violent incidents in prison were recorded during the same year.

According to Empty Cages Collective:

Prisons are part of a wider social problem caused by inequality and oppression. Prison abolition involves creating alternatives to the punitive justice system that addresses the root causes of crime and challenging the oppressive forces present in society.

Prison abolition can be seen as both the process of challenging institutional oppression and the long-term goal of dismantling the prison-industrial-complex entirely.

We must stand in solidarity with prisoners like Thakrar in struggling against the injustice of the prison system, while at the same time looking for ways to move beyond the punitive justice system.