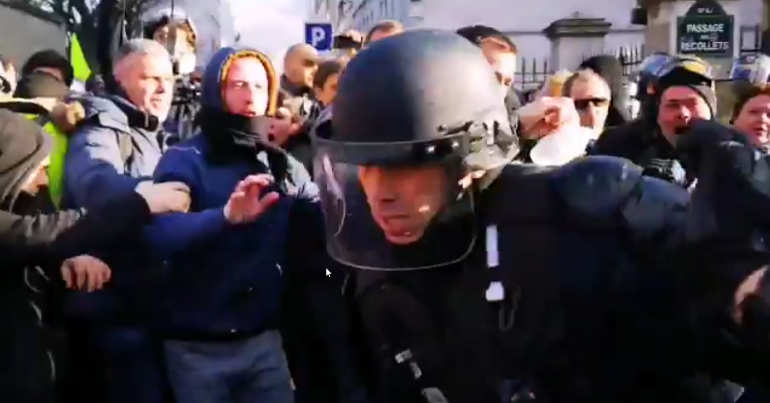 A viral video shows police in Paris attacking a crowd of protesters with batons yesterday, as thousands of ‘Gilets Jaunes‘ (yellow vests) converged on the capital:

in France under Macron, you dare throwing water on police and you get slaughtered… They call it "measured response"… #YellowVests #Frexit pic.twitter.com/wHia8tUjkn

The Gilets Jaunes uprising is named after the yellow hi-vis jackets that are a trademark of the movement. Gilets Jaunes supporters have been taking over streets all over France since November 2018. The movement is perhaps best known internationally for its massive demonstrations in Paris, but demonstrations are also held in other French cities and even villages on a weekly basis.

The protest on Saturday 19 January was dubbed #Acte62 (Chapter 62), as this is the 62nd consecutive Saturday of protests.

The Gilets Jaunes are demanding the resignation of French president Emmanuel Macron. But the movement’s demands are far more diverse than that. In June 2019 Paul Cudenec, an English anarchist living in France, told The Canary:

To start with, the Gilets Jaunes’ protests were sparked by a rise in diesel fuel prices, so it came across as some kind of vaguely right-wing populist movement. But it quickly became clear that this was not the case and that there was general opposition to social injustice behind it. In fact, most of those taking part were new to protesting and more or less unpolitical.

The police violence that the Gilets Jaunes have faced has motivated some protesters to keep on demonstrating.

Demonstrators were joined yesterday by trade-unionists. French public-sector and transport workers are angry at Macron’s program of reforms. Ed Sykes wrote in The Canary in December 2019:

Public-sector workers fear Macron’s changes will force them to work longer and shrink their pensions. Some private-sector workers share their worries.

“Species are dying… Workers are on their knees”

A joint statement by some of the groups on the streets yesterday reads:

The results are simple: we are regressing at all levels. Except in matters of police surveillance and repression. But otherwise: nature and species are dying, pollution is increasing, life expectancy has started to stagnate, public services are on their knees and private workers are on their knees with increasingly precarious and poorly paid jobs.

They also like to hunt handcuffed people. So fun pic.twitter.com/2sFea2yT5b

Protesters also reported that water cannons were used by police.

Several observers on Twitter pointed out the lack of media coverage of the protests:

Huge anti-government protests in the streets of Iran…or is it Russia?

This has been going on in France for over a year now. Why doesn’t our media report on it? #YellowVests https://t.co/TJW1sTkuNI

Protesters fought back against police by hurling projectiles and building barricades. One video posted on Twitter shows cars lying on their sides and fires burning, as police move in:

Police had to “rescue” president Macron when protesters forced their way into a Paris theatre after they reportedly found out that he was inside.

“The dustbin of history”

A statement, written by some of the groups protesting, states:

This is an opportunity to be huge in the street, to express our rejection of pension reforms and Macron’s world.

The pensions reform bill is due to be discussed by France’s Council of Ministers on 24 January. The authors of the statement conclude with the wish that both the reform bill and it’s authors will be consigned to the “dustbin of history“.