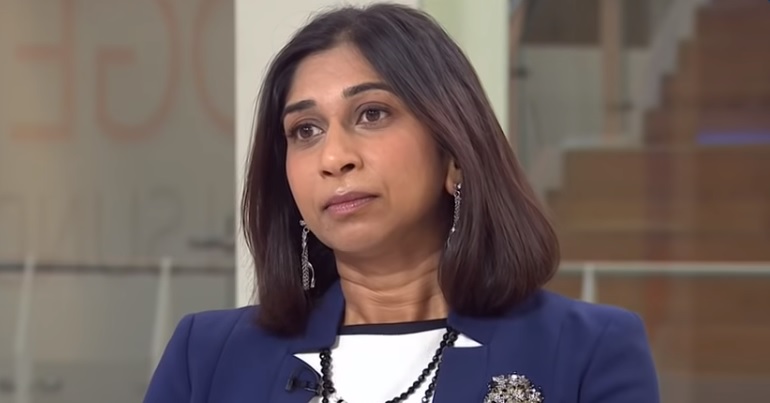 In shock news, Sajid Javid has quit as chancellor during the government reshuffle. In a further jarring revelation, Boris Johnson has appointed a politician who appears not to be able to argue her way out of a paper bag as the government’s top legal counsel.

Another day under a Tory government, another absolute mess.

The new attorney general is the MP for Fareham. She’s one of those infuriating politicians – or adults in general – who “personally benefitted” from EU membership (by studying abroad via freedom of movement and the Erasmus scheme) but voted to deny younger people from enjoying the same. In fact, she’s so anti-‘having the UK in the EU’, she chaired the notorious European Research Group (ERG) which has long argued for a hard Brexit.

I feel a thread coming on, about Suella Braverman's incompetence and disingenuity.

Starting with @StevePeers's experience of working with her. If someone can manage to annoy Steve, and make him badmouth them, there really must be something wrong with them! pic.twitter.com/v7rFyrXpKB

Without a leg to stand on

Braverman appeared on Channel 4 News in 2017 when in her ERG role. The group had sent a letter to then-PM Theresa May arguing against remaining part of the single market during any transition period. The interview speaks volumes about Braverman’s capacity for the new role. Because when faced with a simple question from Krishnan Guru-Murthy, she could barely summon any argument:

Suella Braverman MP.
This bullshitter, who doesn't even respect the public's right to know how our money is spent, is the new Attorney General.
🤦‍♂️
pic.twitter.com/YTFI7vr3Dy

The Channel 4 News host noted that the ERG is publicly funded and asked Braverman to confirm how many ministers were in it. But the ERG chair refused to do so. Guru-Murthy then argued:

you’ve just said you take public money, therefore the public ought to know where its money is going.

It’s all on the public record, and people are able to disclose their name.

The host asked where he could find that public record, twice, and after Braverman had blustered for a bit, she admitted:

The list of members is kept by the European Research Group.

After more toing and froing, where Guru-Murthy pressed the MP to find out if the list was publicly available (according to the common understanding of the word ‘public’ as opposed to Braverman’s strange definition of it), the MP ended by promising to get it to the host personally.

In short, the interview was a disaster. Braverman crumbled under Guru-Murthy’s questioning, fumbling for words or, indeed, an argument to pull together, and got (easily) caught in a bizarre twisting of the truth. Yet Johnson has now appointed her as legal adviser to the decisions the government makes.

Braverman does have a legal background. But even when it comes to this, she has shown herself to be lacking, because she’s argued against the courts having power over the executive (i.e. her government):

Latest from Hungary. Not content with undermining media freedom and trying to destroy broadcasters they don’t like, there’s now an Attorney General dedicated to undermining the judiciary and sorry, actually that’s us. #reshuffle pic.twitter.com/YMRIx8RSpm

Needless to say, all this makes her a perfect match for the Johnson government. A hunger for unchecked power? Check. A tendency to lie and bluster when faced with uncomfortable truths? Check. Yes, she’ll fit right in.