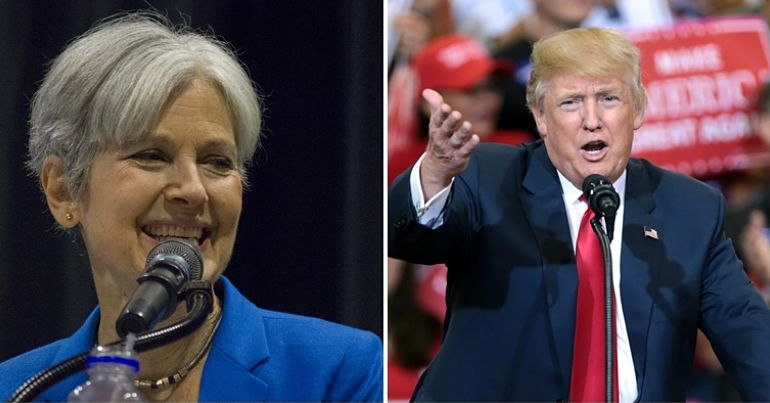 Green Party 2012 and 2016 US presidential candidate Dr Jill Stein has reminded us how Donald Trump won the last election. According to Stein, Trump’s victory had everything to do with a poorly selected Democrat candidate. And that candidate, Hillary Rodham Clinton (HRC), was the choice of the Democrat elite:

Perfect summary of elitist groupthink that led Dems to defeat by likes of Trump: don't try to win over people who didn't vote your way last time… Blame them! Shame them! Call them deplorable, toxic bros! Why would anyone listen to elites who gave us HRC on how to beat Trump? 🤔 https://t.co/0U900WLzw0

Many progressives now believe that the Democratic establishment’s favourite to take on Trump in 2020 – Joe Biden – is essentially a rerun of the Clinton campaign, but even worse. With this in mind, Stein says Biden’s backers “are sleepwalking into a brutal beating” in November:

Many of us warned that Clinton was a weak candidate who wouldn't turn out the voters Dems needed to win. Neolibs didn't listen. Now even more people are warning that Biden is an even weaker candidate. Pushing him in his current state is not only cruel, it's a recipe for disaster. https://t.co/4WwiCfE2jQ

The attack on Stein

Stein’s first tweet was responding to an attack on her from economist and columnist Paul Krugman. Krugman highlighted that professor and author Dr Cornel West had supported Stein’s presidential election bid in 2016. As a result, according to Krugman, West should no longer be allowed attend Democrat events.

But West had also endorsed Bernie Sanders until Clinton got the nomination. He said Sanders was “the standard-bearer for truth and justice”. By contrast, he said Clinton was:

a neoliberal disaster… who generates a mass incarceration regime, who deregulates banks and markets, who promotes chaos of regime change in Libya, supports military coups in Honduras, undermines some of the magnificent efforts in Haiti of working people, and so forth.

Krugman’s attack on West referenced a New York Times article written by Lisa Lerer. Lerer’s article said West “pleaded with his ‘own Black people’ to support” Sanders at a rally in the city of Flint. And while her article mentioned that community activists attacked Biden’s criminal justice and housing policies, it predominantly asserted that Sanders wouldn’t win over any new Black voters. Lerer’s article claimed Sanders’s performance would mean he’s “unlikely to pull large numbers of African-Americans away from Mr. Biden”. But this isn’t the first time the mainstream media has attacked Sanders. So Lerer’s article wasn’t exactly alone.

Stein also received quite a lot of support for her point of view: 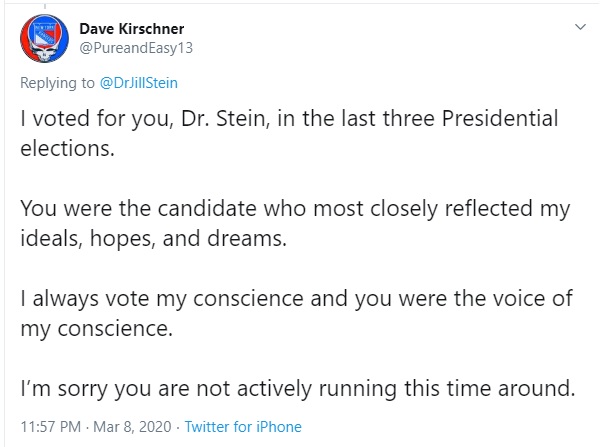 And one person pointed out that Sanders has received support from prominent economist Joseph Stiglitz. In fact, Stiglitz believes Sanders would have beaten Trump in 2016. 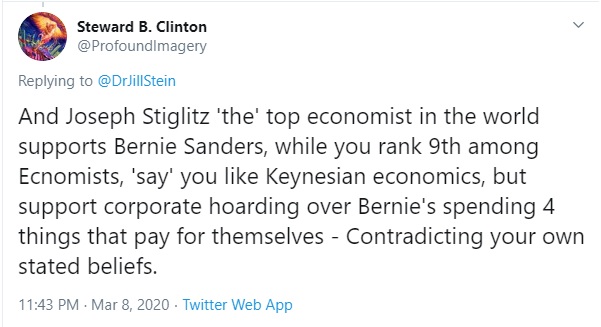 Not a time for gripes

It’s a lazy argument to say that just because West endorsed Stein in 2016 that he shouldn’t be allowed near a Democrat rally. Because in endorsing Stein, West was endorsing the candidate he felt would do best by ordinary people – not the elite. So endorsing Sanders this time around is in keeping with that position. He’s consistent.

Meanwhile, the Democratic establishment seems to be doing its best to boost Biden and undermine Sanders:

DNC has suddenly changed its debate rules AGAIN: Bernie & Biden will sit & take questions from audience, rather than stand for a moderated debate. In short: it's not a debate. This will only fuel concerns about Biden's cognitive decline & his ability to debate Trump this fall. https://t.co/wqexNADB6d

New standards eliminate #TulsiGabbard from next Democratic debate. The undemocratic @dnc on Friday announced new retroactive qualifying standards for the upcoming Arizona debate that will leave only the top two establishment contenders on stage. https://t.co/8rk0gZyxzN

Removing Trump from office and replacing him with a president that represents ordinary people is priority number one. Democratic Party elites, however, want Biden – no matter the cost, apparently. In such a critical election, progressives must not fall for their divisive, irresponsible propaganda.