There have been many accusations about the Tory government’s coronavirus response. From it being too slow, to being led by behavioural scientists, Boris Johnson’s approach has come in for severe criticism. And now, the PM has been accused of delving into “communism”. Probably because he’s just taken a policy from ‘that far-left agitator’ Jeremy Corbyn.

As the Guardian‘s Jim Waterson tweeted:

Broadband now being considered as a proper public utility that people need-to-have by the government, who’ve got providers to agree to lift all data caps, prioritise repairs to the vulnerable, and avoid cutting off people who can’t pay their bills. https://t.co/kO4Oj6Lcuj

As the Department for Culture, Media and Sport announced on Sunday 29 March, the Tories have struck a deal with broadband companies. It will see “all providers”:

Of course, the devil is in the detail. The government has not made clear whether by “vulnerable” customers it means the ones it deems to be “high risk“. Also, while ‘supporting’ people to pay their bills is all well and good, the announcement doesn’t indicate what this means in reality.

People on Twitter immediately spotted the spooky similarities between Johnson’s government’s announcement and something else. That something else being Labour’s 2019 manifesto:

Another one of those dangerous “Marxist policies” that scared people shitless and witness during the last GE.
The same tits now decide that they now NEED it. https://t.co/7QQZg3Tble

it's almost as if access to the internet is a human right 🤔 https://t.co/eeHnMD6IBs pic.twitter.com/l69G7zcC7q

It would WILD if a political candidate had suggested something like this in the general election, can you imagine 😂😂😂 https://t.co/Rjnim2wG7T

Yes, of course – this is the news that the PM forcing the hand of broadband companies has echoes of a Labour 2019 policy pledge. The one where it was going to nationalise broadband. As its manifesto noted:

We will need world-class digital infrastructure in which everyone can share.

Labour will deliver free full-fibre broadband to all by 2030.

So, while the Tories moderate strong-arming of broadband companies is a world away from nationalisation, it still marks another step-change in the government’s approach to the coronavirus pandemic.

All that glitters isn’t gold

In a few weeks, we’ve seen from the Tories:

You could say this is all a bit ‘socialist’; all this state intervention and increased money for public services. But in reality, this isn’t a socialist solution to the crisis.

So far, the estimate of the total value of the Tories’ coronavirus bailouts is around £200bn and counting; more than all the 2008 banker ones put together: 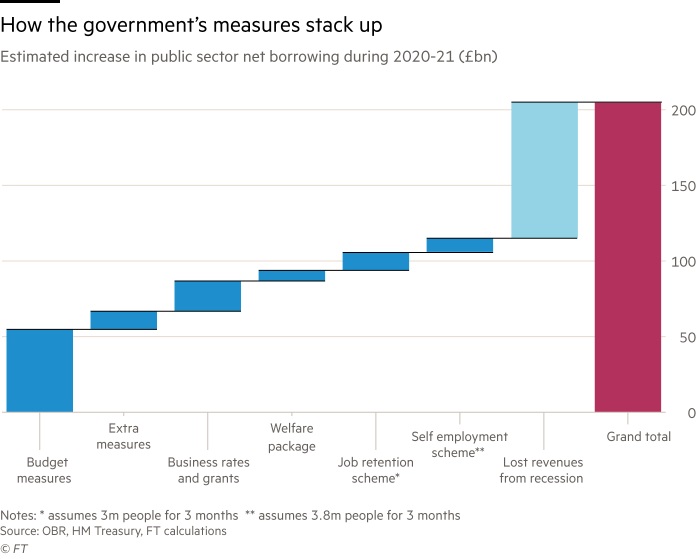 And once the initial dust has settled after the pandemic, the money will have to come back from somewhere. So far, nobody knows exactly where that somewhere is. Although given the Tories’ parliamentary majority, the word “austerity” may feature heavily in their solution to what will be a massive budget deficit. Chancellor Rishi Sunak has already suggested tax rises may be on the way.

But perhaps the bigger problem here is that it has ultimately been over a decade of Tory rule and austerity which has made the UK so unprepared for coronavirus. As Corbyn recently wrote for the Sunday Mirror:

the tragedy is that a decade of cuts and austerity has made their job so much harder and left us all ill-prepared for the pandemic we now face.

Our NHS is on its knees. We have fewer doctors and nurses per head than most other developed countries and only a quarter of the vital ICU beds per person that Germany has.

Even Jeremy Hunt, who imposed brutal austerity on our health service, now admits he regrets many of his cuts.

So, it sticks in the throat somewhat that after years of cuts, only now do the Tories decide to invest in this country’s people and public services. Of course, not because they care. But because they’re worried about the economic fallout of the pandemic. In reality, there’s no ‘Marxism’ in any of Johnson’s measures; however much forcing broadband companies’ hands seems like it. It’s just more protection of corporate capitalism. Protection we may all end up footing the bill for, anyway.