Left-wingers around the UK are feeling cheated and betrayed in the wake of the Labour Leaks scandal. And there’s one particular response to the apparently consistent undermining of former leader Jeremy Corbyn that should really worry the party’s new leadership.

The campaign to undermine Corbyn

On 12 April, Sky News revealed that Labour lawyers had essentially stopped the party from sending a highly revealing internal investigation to the Equality and Human Rights Commission. This has since generated widespread anger among people who have supported the party in recent years, because they feel the report shows they were right to defend Corbyn against widespread hostility from British elites. The investigation claims that “hyper-factional” opposition to the ex-leader among former senior officials was a key factor in hindering effective handling of complaints regarding alleged antisemitism. At the same time, it argues there was “no evidence” that such complaints received different treatment from other complaints.

This is a particularly significant revelation in light of the years-long smear campaign which sought to convince British voters that Corbyn and his supporters were somehow raving antisemites. As The Canary reported previously, Corbyn is a peace-prize winner and veteran anti-racist campaigner; and his leadership marked an ethical break from the party’s warmongering and corrupt foreign policy. A large majority of Labour members and left-wingers saw the propaganda against his movement to be “wildly exaggerated by the right-wing media and opponents of Jeremy Corbyn”. But others in the country didn’t feel the same way.

Perhaps the biggest Labour Leaks scandal for members and supporters, however, is the allegation that senior figures at Labour HQ actively undermined the party’s almost-victorious 2017 election campaign. The report claims, for example, that these people “openly worked against the aims and objectives of the leadership of the Party, and in the 2017 general election some key staff even appeared to work against the Party’s core objective of winning elections”.

In light of these allegations of high-level efforts to derail Corbyn’s leadership and election chances, many people were livid. And one author raised a possibility that should really push new Labour leader Keir Starmer to act decisively to ensure such alleged sabotage never happens again: 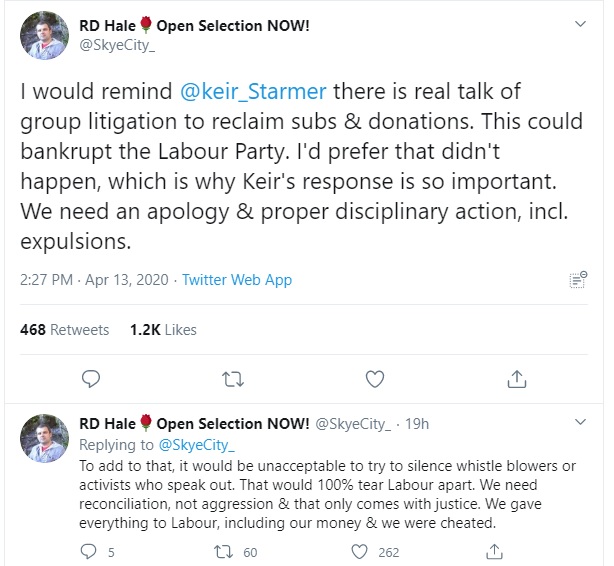 In short, there is a possibility that, if Starmer does not act accordingly, many current or former members could demand a refund on the money they spent trying to put Corbyn’s Labour in power.

Numerous people responded to this post by showing their support for such action. And there is clearly widespread anger and disappointment across the country following the Labour Leaks revelations: 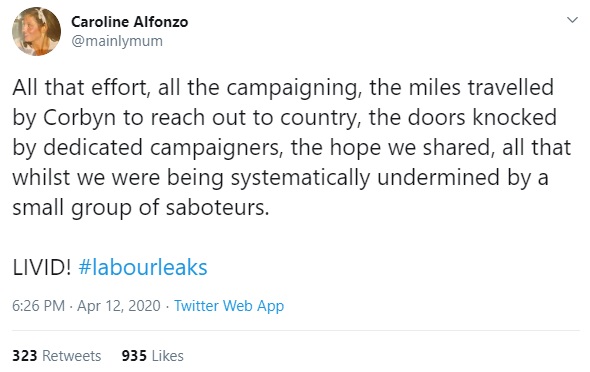 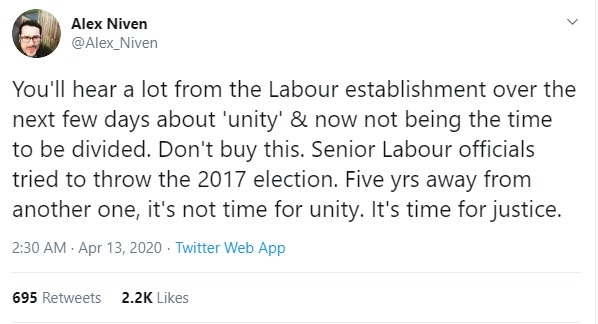 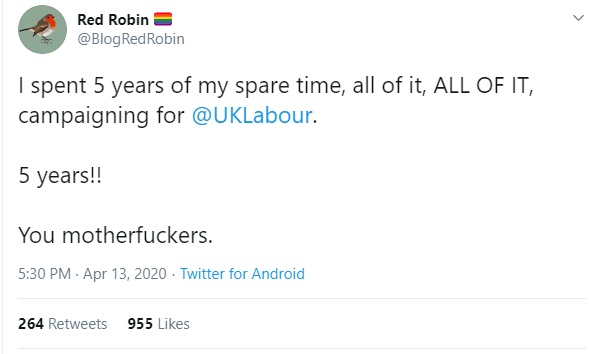 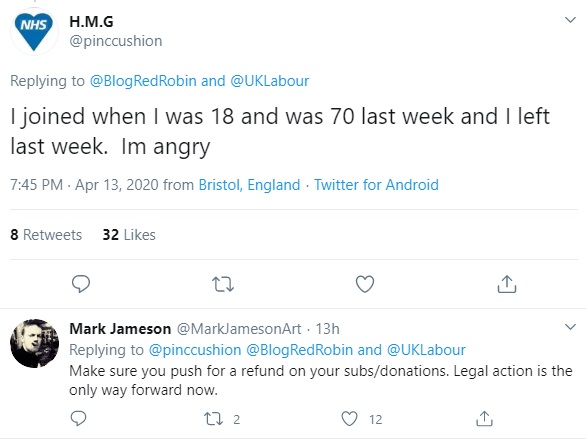 In fact, left-wing Labour MPs have also expressed their anger over the leaks: 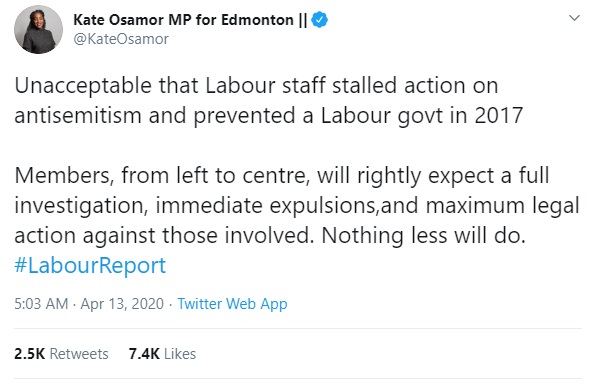 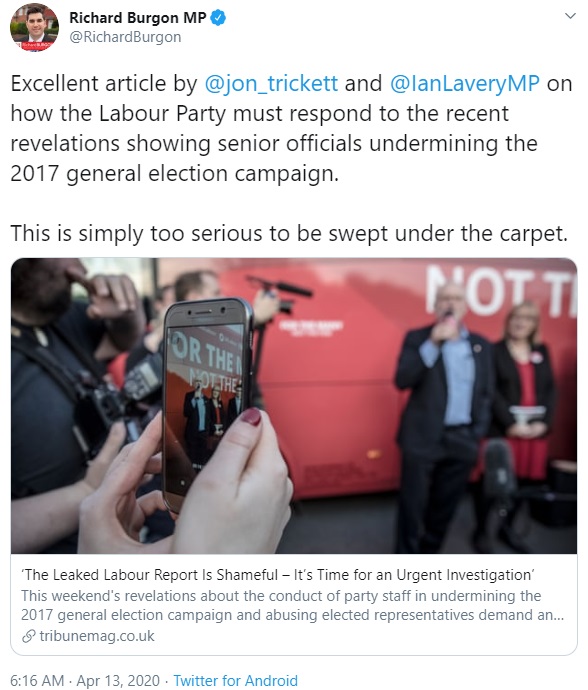 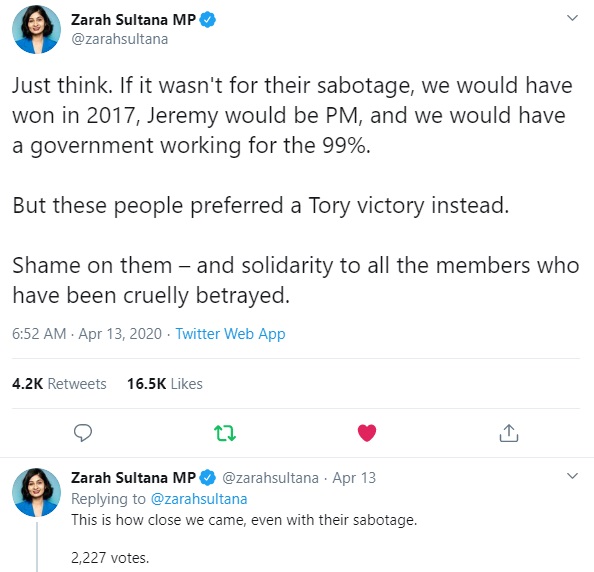 As Al-Jazeera reported, Starmer announced on 13 April that Labour would launch an investigation. This would look into “why the report was commissioned, its findings and also how the document was released into the public domain”. But this response hardly inspired confidence: 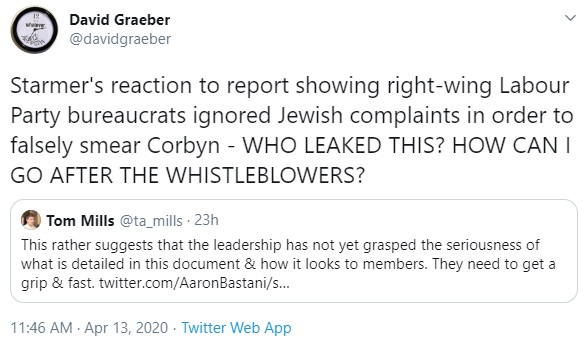 As one Labour councillor put it:

Perhaps the threat of mass legal action demanding refunds may help Starmer and his team to understand just how angry people are right now.