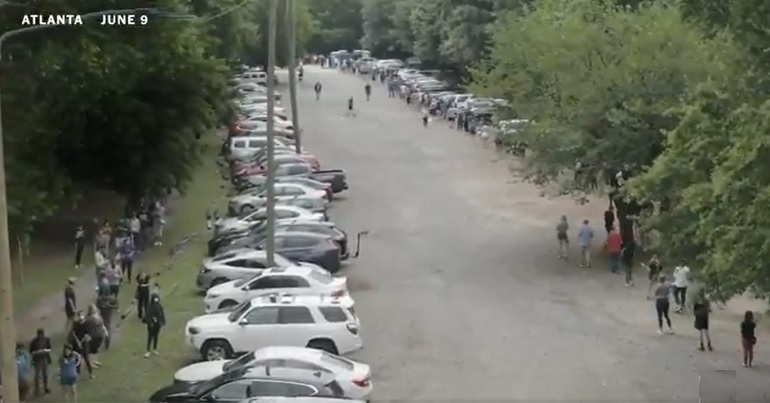 Primary election voting took place in the American state of Georgia on Tuesday 9 June. However, thousands of voters were reportedly unable to cast their votes. Across the state, polling stations have been closed and technical issues have caused problems with newly purchased voting machines.

On Twitter, many people slammed the difficulties faced by voters as “voter suppression”:

Pittman Park polling location didn’t open until 8:10am. The 1 machine they dedicated to this location is broken. This is what voter suppression looks like. #VoterSuppression #georgia #fultoncounty #atlanta #GAprimaries @wsbtv @staceyabrams @11AliveNews @fairfightaction pic.twitter.com/590Cqx7pID

It didn’t go unnoticed that this issue disproportionately affected Black voters. Over 32% of Georgia’s population is Black, compared with 13% of the national population. And the failures in the primary election in Georgia are particularly glaring against the backdrop of widespread Black Lives Matter protests across the US. Prominent voices, including senator Kamala Harris, have criticised this disenfranchisement of Black communities:

If you aren't retweeting the voter suppression going on in Georgia right now impacting Black Americans you obviously don't care. SHAME ON YOU @GOP @BrianKempGA STEALING A ELECTION. You can't have a Democracy if you suppress the black vote. RACISTS.

Not free or fair

In fact, Georgia isn’t new to controversy when it comes to elections. In 2018, Republican Brian Kemp won the election for governor against Stacey Abrams in the midst of allegations that the voting system, overseen by Kemp and his team, “left voters lawfully purged from the [electoral] rolls, waiting in the rain and facing rejections of their ballots for arbitrary reasons”.

With support from the Republicans, voting for the primary election in Georgia seems to have been beset with similar obstacles, which could disenfranchise Black voters in particular:

There were 80 fewer polling places for June primary in metro Atlanta, where majority of black voters live

Georgia is ostensibly a swing state and the seat is a target for the Democrats. The barriers to voting in the state have caused people to question whether the election can be described as “free and fair”:

Now, 16,000 active registered voters from five precincts have to vote at ONE polling place — and the voting machines are down.

Does this sound like a free and fair election to you? https://t.co/NksXTcSjnN

Georgia’s elections are not free and they are not fair. It is an institutional, systemic goal of this state’s Republican leadership to disenfranchise its voters and it is a national shame.

If it were another country, we’d be demanding international observers.

Alongside the closing of polling stations, one key cause for concern in the 2020 presidential election is the introduction of electronic voting machines. Lawyer and election security advocate Jennifer Cohn explained on Twitter why the introduction of Ballot Marking Devices (BMDs) is “dangerous” for the elections.

Cohn described how the ‘paper ballots’ printed by BMDs are different to hand-marked ballots. Firstly because BMDs can easily be hacked but also because illegible barcodes can make it harder to tell which candidate a person is voting for.

Public Service Announcement about new touchscreen voting machines (BMDs) that officials in Georgia and many other US jurisdictions have recklessly purchased in lieu of #HandMarkedPaperBallots and are debuting this year. Part 1.
1/ pic.twitter.com/NK6kluqGKB

If that wasn’t troubling enough, it turns out Kemp reportedly purchased the voting machines from a company championed by his former chief of staff Jared Thomas:

Georgia purchased Its touchscreen voting machines—which failed miserably today—from “Dominion, whose lobbyist, Jared Thomas, was Governor Brian Kemp’s chief of staff and press secretary from 2012 to 2015 when Kemp was secretary of state.” By @jennycohn1 1/ https://t.co/dJv99FEq0f

In the wake of the Black Lives Matter movement, many felt the need to highlight how the failures in Georgia’s voting system will disproportionately impact Black people:

These reports out of Georgia that reek of voter suppression are a bitter irony on the very morning George Floyd is laid to rest, his brother having urged people to vote for change. They’re stealing our votes while we bury our martyrs. https://t.co/SxxfxD0GWD

And basketball player LeBron James questioned whether the voting system is “structurally racist”:

Everyone talking about “how do we fix this?”  They say “go out and vote?”  What about asking if how we vote is also structurally racist? https://t.co/GFtq12eKKt

Brad Raffensperger, the secretary of state for Georgia, has vowed to launch an investigation into the failings of the voting system which took place on 9 June. Meanwhile, as House democrats ‘take the knee’ in photo ops to publicly support Black Lives Matter, their efforts would be better diverted towards calling out the disenfranchisement of voters in Black communities.

Now is the time for them to go beyond paying lip service and actually call for accountability from the Republican government. Because just saying ‘Black Lives Matter’ isn’t enough. Our support means little if we aren’t using the power and privilege at our disposal to challenge the structures excluding Black people and putting them at a disadvantage in all areas of society.