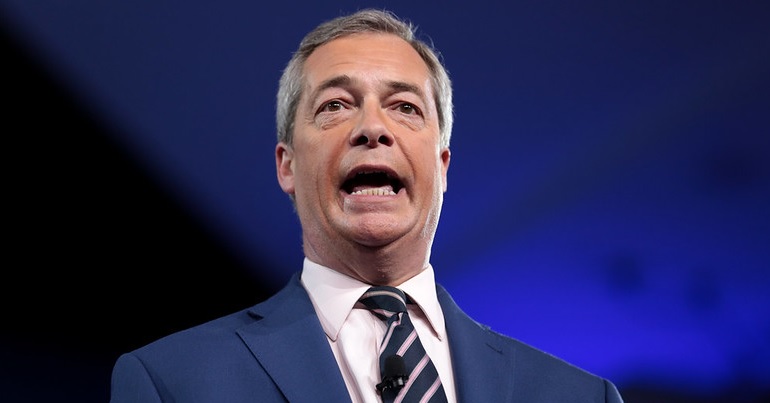 Nigel Farage launched an attack on refugees (again) on 6 August. Or rather, he screeched at his Twitter followers that refugees had mounted an attack on Britain. A “shocking invasion” had happened, apparently. He even invoked the language of World War II, describing the refugees as making a “beach landing”.

Farage also included what he said was “exclusive footage” of the alleged offensive. And what did it show? Around a dozen or so people, including women and children, pulling themselves from a dinghy onto an empty shore. Once on dry land, the adults tended to the children before taking them by the hands, or lifting them onto their shoulders, and walking up the beach.

Shocking invasion on the Kent Coast taken this morning. pic.twitter.com/iuzAF0Uxz4

In short, it seemed to show families, determined and desperate to get their children to a safe place. Farage’s melodramatic, callous, and hate-filled interpretation of it, meanwhile, spoke volumes about him.

Given how off the charts over the top Farage’s tweet was in relation to the reality of the situation, many people opted for ridicule in response:

And look at this, from this morning at Folkestone. I for one have had enough. https://t.co/1axS1kgmBh

When does the "shock " kick in, exactly? It's not really William the Conqueror and his hordes is it.

Others attempted to ‘fix’ Farage’s portrayal of the situation:

I’ve fixed that for you. You’re welcome. pic.twitter.com/gnORkBl0QF

Some also tried to introduce empathy into the Twitter discussion, which was nowhere to be seen in Farage’s reaction:

Hardly an invasion. There is a few of them holding the hands of their children. They have risked their lives for a better life, you only put you and your family on a boat if it’s safer than home. Have a bit of empathy although it often seems too much to as ask.

Although, admittedly, the music duo Sleaford Mods appeared to have little empathy either, for Farage’s hate-filled reaction that is:

You are a horrible bastard. A horrible, horrible fucking bastard.

Farage’s dishonest and racist record in relation to refugees shows that anything he says on the issue should be taken with a pinch of salt. So who actually knows where or when this video is from? But the impossible situation many refugees are currently in is indisputable.

Authorities in France have evicted huge numbers of refugees from camps in Calais over the last month. Aid workers say the police tactics for forcefully evicting refugees include the use of tear gas. Founder of the humanitarian charity Care4Calais, Clare Moseley, recently commented:

This policy is cruel and it is counterproductive. It succeeds only in increasing the numbers of people desperate enough to make a dangerous attempt to cross the Channel.

The UK government’s response to the increased number of people trying to cross the channel, meanwhile, has been to attack the “activist lawyers” who help refugees with their asylum claims and condemn the asylum system as “inflexible and rigid”. Detention Action’s Bella Sankey said:

Desperate times see the department falling back on bully boy tactics – when you hear ‘activist lawyers’ think of hard-working professionals committed to upholding the right to life and the rule of law.

The refugees are also, of course, having to face the cold shoulders of authorities on both sides of the channel during the coronavirus (Covid-19) pandemic. As the World Economic Forum has pointed out, refugees are at a “heightened risk of contracting – and dying from – the virus” because they can’t take the necessary precautions – like social distancing and regular hand washing – in cramped camps.

In short, refugees are in an utterly dire situation. Yet Farage’s reaction to seeing a dozen or so of them make it ashore safely – including a number of children – was to characterise them as dangerous invaders. What a humiliating low that is.