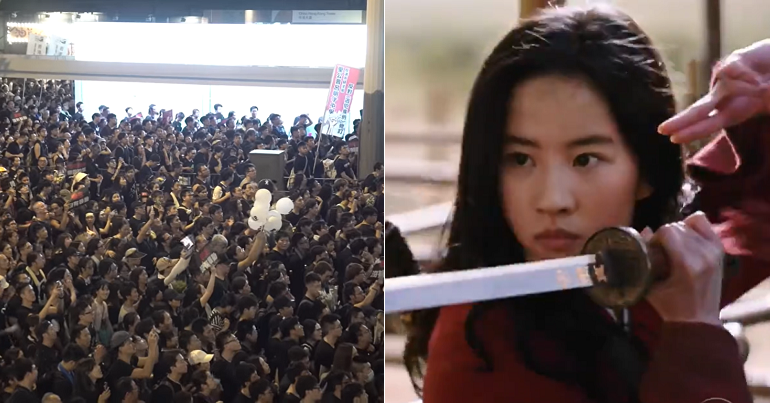 On Friday 4 August, Disney released its live-action remake of the animated classic Mulan on its streaming platform Disney Plus. While the entertainment giant has been heavily promoting the release, many pro-democracy supporters in East Asia got #BoycottMulan trending at the same time.

In August 2019, the main lead, Chinese actress Liu Yifei, came under fire for publicly supporting the Hong Kong police amidst their brutal crackdown against pro-democracy protesters. Calls for boycotting the film arose at the time, and have been renewed with the release of the film:

This film is released today. But because Disney kowtows to Beijing, and because Liu Yifei openly and proudly endorses police brutality in Hong Kong, I urge everyone who believes in human rights to #BoycottMulan. https://t.co/utmP1tIWNa

And similar criticism has also been made of fellow actor Donnie Yen:

Same goes for Donnie Yen, another outspoken admirer of the Hong Kong police. I, too, urge everyone who believes in racial justice to #BoycottMulan. https://t.co/lsEnnzF1oz

#BoycottMulan is trending in #Thailand

It seems our #Thai friends have tweeted the hashtag over 100,000 times!

As a Filipina under a government that signed a law suppressing the fundamental rights and freedoms of Filipinos and someone who supports Thailand's fight for their rights, I stand with the people of Hong Kong. #BoycottMulan https://t.co/Cr7Tbk5oSh

Melbourne-based human rights activist James Lee Proudfoot told The Canary that the call for a boycott has served as an important tool to raise awareness around the Hong Kong protests:

I see #BoycottMulan as an extremely useful tool for raising awareness about police brutality and the plight of Hong Kongers.

For some, supporting human rights and democracy can seem as lofty and abstract, but by grounding it in a narrative we make it visceral and concrete.

Given Liu Yifei’s status as a celebrity we are also able to generate significant interest and reach audiences who might not be familiar with the situation in Hong Kong.

Your meme is strong

Of course, the memes have come out in full force:

In particular, memes depicted an act of solidarity by protesters who wore an eye patch. This was in response to a woman who suffered a serious eye injury as a result of police brutality:

People are sharing memes such as the one above of Mulan wearing an eye patch and face mask. It’s an ode to both Mulan’s struggle for justice and Hong Kong protesters during the pandemic.

The spirit of Mulan

One of the reasons for the call to boycott appears to be linked to the story of Mulan herself, and its message of defiance. Mulan, according to the Chinese legend, broke formally imposed rules in order to do what’s right and fight for justice. This doesn’t seem too far removed from protesters disrupting the peace and taking direct action in order to demand their rights in Hong Kong.

Of course not every actor can embody their character’s values. But Mulan is essentially a story of a rebel warrior woman who fights to defend her community. How can we watch actors portraying this story who actively support the brutal suppression of human rights in Hong Kong, Xinjiang, Tibet and Southern Mongolia – from a position of extreme privilege and even a US passport?

In the same vein, some people have used the hashtag to call attention to protester Agnes Chow Ting, who was arrested and recently convicted for “inciting protesters”.

What we watch is about so much more than entertainment. By consuming media, we implicitly show our support for it, and it therefore speaks to our values and worldview. Rather than just being empty entertainment, the media we consume can be an endorsement of the world in which we want to live.

We have the power, as viewers, to send a message to Disney, the actors in Mulan, and the Hong Kong administration. We may love Mulan, but we reject attacks on protesters and police brutality.