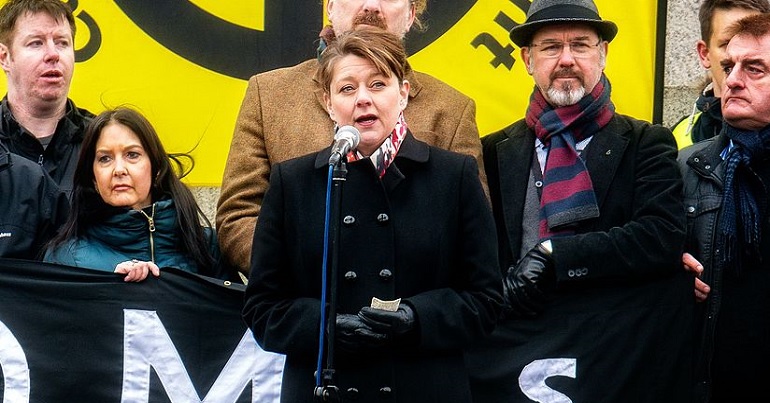 A former Plaid Cymru leader gave perhaps the most important response to Millwall fans booing players who ‘took the knee’. Because she provided crucial historical context as to why the supporters’ and others’ reactions should worry us.

The Guardian reported that on Saturday 5 December, Millwall fans sparked outcry. It wrote that:

some of the 2,000 home fans inside the ground booed when home and Derby players took a knee before kick-off.

Booing from the stands was clearly heard after the referee, Darren England, blew his whistle for the players to take a knee, a gesture used to show support for the fight against discrimination following the unlawful killing of George Floyd in America.

Goal summed up the meaning of “taking the knee”:

Historically, kneeling has been a way to show silent solidarity in support of human rights amid political turmoil – when athletes are not expected to drift away from their role and ‘stick to sports’.

The action of kneeling can be dated back to the civil rights movement in the United States, where the likes of figures such as Martin Luther King Jr – along with other activists – kneeled after leading a prayer after a group of protesters were arrested during a march to the Dallas County Alabama courthouse on on February 1, 1965.

So Millwall and Derby players doing it should hardly be a surprise. Yet it clearly was for some fans. But then, as commentator Ash Sarkar tweeted, maybe we shouldn’t be shocked:

Millwall fans are often scapegoated for a racism problem which exists across football as a whole.

But lmaoooooo if you expect me to believe that Millwall is generally antiracist, and only has very specific and limited problems with BLM. https://t.co/smoz8F9eQ9 pic.twitter.com/SIz9ROCveZ

But there’s a deeper problem with what happened at Saturday’s match.

Many people tweeted that Black Lives Matter (BLM) was a “Marxist” group. They used it as the reason for Millwall fans booing the players taking the knee. This is probably nonsense. Yet it didn’t stop people saying it.

Former Plaid Cymru leader Leanne Wood, however, provided a timely reminder of why people smearing a progressive group as ‘Marxist’ should worry us.

In response to UKIP’s Neil Hamilton, she tweeted:

Given Marxist & Marxism are routinely used as a term of abuse by the far-right, it’s worth thinking about what this means. See more here: https://t.co/PXBlsFWHsP – we must remember how the Nazis started.

Who can tell me what the problem is with Marxists? pic.twitter.com/HvuKYP8VRE

A lesson from history

She wrote about how she visited the site of the former Nazi workcamp in Dachau, Germany. Wood described how the Nazis put people who opposed them in this workcamp. She noted how the camp’s first prisoners were “socialists, anarchists, clerics and academics”. But perhaps crucially, Wood said:

Before people were interned in camps, there were propaganda campaigns by the Nazis designed to demonise and demean certain groups of people, to “other” them, to turn wider public opinion against them. That way, blind eyes can be turned to cruel treatment towards these groups.

When I hear the loser President of the United States denounce “socialism” and “socialists” and when I see far-right / alt-right voices denounce “anarchists”, “leftists” and “Marxists” as they do, I am reminded of my visit to Dachau and I shudder. Do you?

Wood is spot on. The baseless accusations of Marxism made against BLM are dangerous propaganda, designed to detract from its cause. We all need to see this for what it is: the far-right, once again, on the march.