No, not all men are predators. But all women have experienced predatory behaviour. - Canary 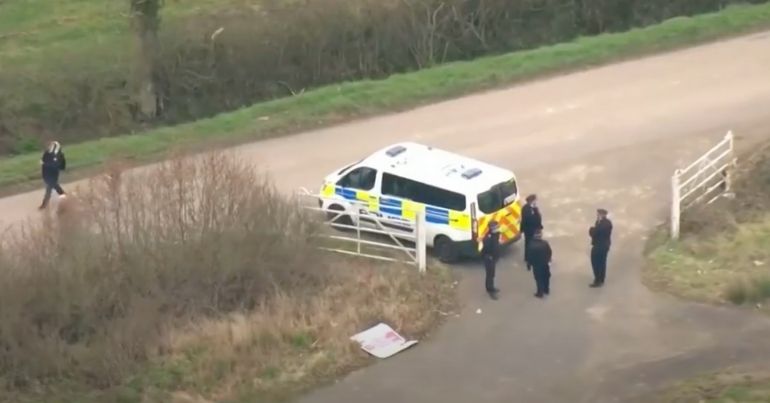 A serving Metropolitan Police officer has been arrested on suspicion of murder in connection with the disappearance of 33-year-old Sarah Everard. She was last seen in Clapham, south London on 3 March. Police say they have found what appears to be “human remains” in an area of woodland in Kent, though they have not confirmed an identity. Women took to Twitter to send their love and solidarity to Everard’s friends and family, share their experiences of harassment and assault, and vent their frustrations at advice telling women to “be careful and not go out alone”.

Women took to Twitter to hit out against victim-blaming claims that Everard’s decision to walk home alone was foolish, and to share their experiences of harassment and assault while going about their daily business. Georgia O’Brien shared her experience of being attacked in broad daylight:

If I see one more comment on Sarah Everard making a "poor decision" to walk home alone at night, I might scream. I was attacked in broad daylight on a bright sunny morning, yards from my front door. Stop focusing on women's choices and start focusing on the men that attack us.

Helena Wadia shared her traumatic story of sexual assault, saying that perhaps if men saw consequences for their actions more frequently, they may feel less emboldened to brazenly attack women. According to figures from July 2020, a survivor reporting rape has a one in 70 chance of the case being charged:

Maybe if men who grope, kidnap, assault & rape actually FACED CONSEQUENCES, this might stop happening? Like, they found the guy who assaulted me but then let him go cos there was only evidence he was standing behind me, not that he *actually* groped me. Ok then

Bella Sankey shared her experience of being assaulted “in broad daylight”:

The scale of abuse against women is terrifying. Last week I randomly remembered being sexually assaulted by a man in broad daylight at Euston station when I was 17 and on a sixth form trip. Sexual intimidation is so widespread, I’d just temporarily forgotten this one.

So many women right now are sharing their stories of being followed by men in cars, stalked by strangers and groped when out in public. This shouldn't be a part of our lives. We shouldn't have to think of public space as a place where we're afraid.

Sharing her fears about going for a nighttime run, Olivia Alabaster concluded, “enjoy the streets, men, it’s still very much your world”:

Wish I could go for a run right now but I don’t want to, as it’s dark. Enjoy the streets, men, it’s still very much your world

Putting the onus on women

Highlighting that trans women are at greater risk of gendered violence, another user highlighted that Everard did everything women are “supposed” to do when walking alone:

Also – trying to be more considerate with how I talk about gender so by ‘women’ and ‘men’ I mean she/hers and he/hims. Anyone presenting or identifying as female is equally at risk, and trans women are fundamentally -more- at risk as data shows.

Aidan Milan highlighted just how ridiculous advice for women to “be careful and not go out alone” is:

Telling women not to leave their homes in case of attack is basically acknowledging it's dangerous to be a woman. So how about finally addressing the threats to women, instead of addressing the women under threat?

Sophie Gallagher shared the familiar ‘rules’ of walking while being a woman:

I haven't been running on a weekday since before Christmas – as it is dark when I start work and finish. The one time I did a man ran down the road after me telling me I was going to "get myself killed" for not running on the dark, unlit pavement… #SarahEverard

Every woman you know has taken a longer route.
Has doubled back on herself.
Has pretended to dawdle by a shop window.
Has held her keys in her hand.
Has made a fake phone call.
Has rounded a corner and run.

Every woman you know has walked home scared.

Every woman you know.

Another user highlighted the normalisation of women’s hyper-vigilance while going about their daily business:

Buying rape alarms, wearing sensible shoes, texting your mate when you get in, carrying your keys like a cut price wolverine. You just grow up thinking it's all normal. #TooManyMen

Chanté Joseph shared the ever-present “fear of death and violence” that women feel when walking home at night:

That FEAR of ‘is this it, is this the moment’ when a man looks at you too long or a car slows down while you’re walking home in the dark is REAL. The fear of death & violence is ingrained into how we operate as women and it’s perpetually unsettling. Feeling safe is a privilege. https://t.co/C4rMVb21Nr

Who polices the police?

Rossalyn Warren shared a reminder that “this is the same Met police who still employ officers who took selfies next to two murdered women in a park last year”:

the police have arrested a serving Metropolitan police officer in connection with the disappearance of Sarah Everard. this is the same Met police who still employ officers who took selfies next to two murdered women in a park last year. https://t.co/vPZWXzYISc

Last year my friend Nicole was murdered in a park, by a stranger, and the police officers took selfies next to her body so pls can we defund the police and let women live.

I bring this up to say that the murder of Sarah Everard is gut wrenching. We’ve been given many clues though that the met police have a lot to answer for in how women are dehumanised. They’ve been doing it to Black women over the years in various ways.

Megan Nolan hit out against the “cloth eared” response of increasing police presence to help women and girls feel “safe on the streets of London”:

I honestly cannot explain how demented it makes me feel to read this in circumstances when the person suspected of this woman’s murder is a policeman?? What is happening, how is this not perceived as cloth eared pic.twitter.com/psirFiQEP3

Jenny Stevens shared her traumatic experience of assault, adding that “the police did nothing”:

I was walking home one night in Brixton, not far from where Sarah was taken (panicky, looking behind me, as we always are) when three men circled round me, one of them groped me, and they tried to pull me into a car. A passer by came along thank god. The police did nothing.

Harriet Marsden shared that she would “never report a rape or assault to the police”:

I’ve debated tweeting this for a long time. I’ve almost never said it out loud. So here goes. I have never and would never report a rape or assault to the police, because I don’t believe it would even be taken seriously let alone end in a conviction. So what’s the point?

According to data from the Office of National Statistics, only 17% of sexual violence and abuse survivors decide to tell the police. Seeing these accounts of police negligence and abuse, it’s no wonder that so few women feel safe to seek help from the police.

In response to the defensive #NotAllMen hashtag, Jameela Jamil stated:

It’s true that #notallmen harm women. But do all men work to make sure their fellow men do not harm women? Do they interrupt troubling language and behavior in others? Do they have conversations about women’s safety/consent with their sons? Are #allmen interested in our safety?

Meanwhile, well-meaning men took to Twitter to ask what they can do to make feel women feel safer. Diyora Shadijanova responded, highlighting that individual men aren’t the problem. The problem is a patriarchal society which needs root and branch transformation:

It's quite rare that people become randomly violent overnight! The disproportionate violence towards women is a result of life-long patriarchal indoctrination. To undo that is to radically change society as we know it and that takes a lot more work than crossing a road.

I would rather men who wanted to help began joining forces with existing organisations & used their lobbying power to speak to those at the top about the desperation of this situation, as opposed to just crossing the road when they see a woman and calling it a day.

Reclaim These Streets is holding a vigil for women threatened on the streets at Clapham Common on 13 March:

Streets should be safe for women regardless of what we wear, where we live or what time of day or night it is.

In the UK, a man kills a woman every three days. Women sharing their experiences of assault, harassment, and victim-blaming demonstrates the extent to which all forms of violence against women are normalised in society. The police and government should be protecting women by addressing and tackling the patriarchal norms that perpetuate violence against women, not telling women to stay indoors. Victim-blaming responses to Everard’s disappearance are extremely disappointing, especially during the same week we celebrated international women’s day.

Featured image via This Morning/YouTube.