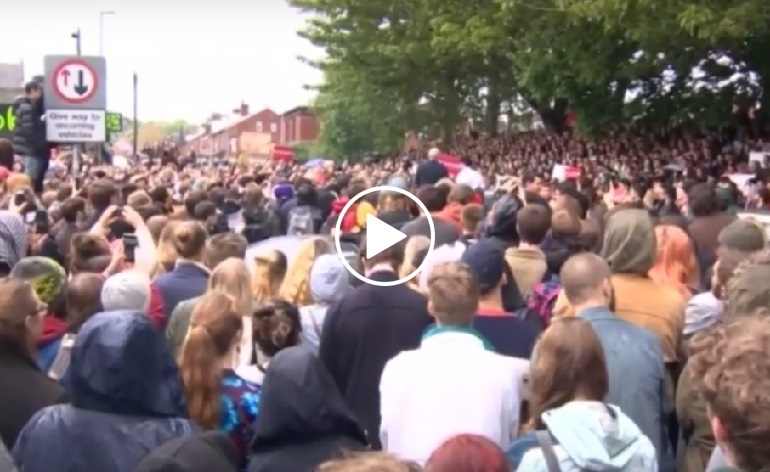 The crowds that turned out for Labour leader Jeremy Corbyn in West Yorkshire on 15 May were so big that they even left the BBC stunned.

On the last day before Labour’s official manifesto launch, local BBC reporters were clearly impressed by the number of people who came out to show their support for Corbyn.

If anybody tells you politics is boring, they weren’t in Leeds this afternoon. There was a huge crowd here… It was amazing. People hanging onto lampposts, hanging onto trees.

Now by anyone’s standards, that was a remarkable reaction today.

Vincent then pointed out the difference between Corbyn’s events and those of Conservative leader Theresa May:

He’s making a trademark of these stump speeches – old school campaigning on the stump. It’s something that Theresa May has not been doing a great deal of. Her events have been typified by her having a lot of party members around her… but not really big public events.

Vincent also tweeted out a number of pictures from the event, along with a video of this popular young boy:

This lad is the crowd favourite.
Dab. pic.twitter.com/70zEQliS8c

And a video of Corbyn telling the crowd:

There’s nothing inevitable about this election. Let’s go out there and show: We. Can. Do. This. Thing. Together!

Jeremy Corbyn signing off in #Leeds
"We. Can. Do. This. Together." pic.twitter.com/2JR7K0inV7

A busy day for Corbyn

Corbyn didn’t only visit West Yorkshire’s biggest city, though. He was also in the smaller market town of Hebden Bridge, where he had to give the same speech twice because of all the people who’d come out to hear him. And his message was clear:

The Labour leader also took apart the Conservatives’ attempts to position themselves as a workers’ party:

On a day when Corbyn impressed nurses and attracted large crowds in West Yorkshire while Theresa May failed on a number of fronts, one campaigner summed up 15 May as follows:

The pro-Corbyn crowds seen above, which even seemed to leave the BBC impressed, once again exemplified the massive difference so far between Corbyn’s campaign and Theresa May’s; and between the two very distinct visions they have for Britain’s future.