No wonder BBC Newsnight is on its way out, after the stunt it just pulled [VIDEO] - The Canary 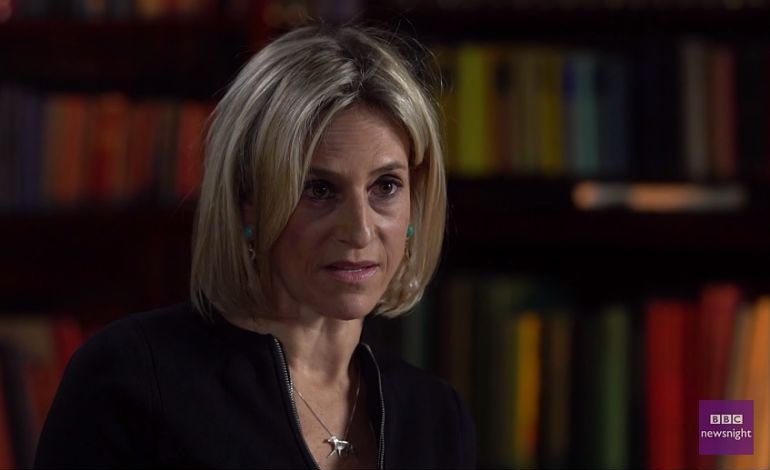 BBC Newsnight has seen its audiences shrinking over the last few years. And no wonder when it pulls stunts like the one it did on 15 May.

The BBC‘s nightly politics show covered Theresa May’s campaign on 15 May. It showed her walking around a market, shaking hands with people and generally receiving a pleasant, albeit muted, response. The show’s politics correspondent Nick Watt narrated the video with the following:

In the Prime Minister’s mind, today’s announcement of new workers’ rights delivered on her pledge to unite the nation after the referendum. Theresa May believes that Brexit marked a cry from people who feel left behind by globalisation.

She wants to show how the economy can work for all and scoop up Labour votes.

Except it wasn’t “globalisation” that people confronted May with on her walkabout. Instead, she heard a “cry” for help from a woman who felt “left behind” by the Conservative government’s changes to the welfare system. And the BBC completely left this out:

My Lord. For the first time in this election #TheresaMay is confronted with the truth. Her #GillianDuffy Moment….. pic.twitter.com/TN9yB8zTxh

May was also challenged on her government’s Help to Buy scheme. An elderly man told May this scheme benefited the wealthy the most. But the BBC didn’t see fit to broadcast this on Newsnight either. Instead, it put this interaction between May and a voter out via Twitter:

.@theresa_may is challenged by a voter on the Tories' help-to-buy scheme out on the campaign trail in Abingdon https://t.co/bZipMjyRgM pic.twitter.com/i5127Hzi02

It has been said that 15 May was perhaps the Prime Minister’s “worst day” in the general election campaign so far. But you wouldn’t know that from the BBC‘s coverage. Presenter Emily Maitlis did challenge Work and Pensions Secretary Damian Green over his party’s workers’ pledges. Such as its plans for the national living wage. Plans that Labour’s Ian Lavery claims will leave working people £2,300 worse off:

Listen to @IanLaveryMP on @bbc5live slam @theresa_may’s workers’ rights reforms which could leave families £2300 worse off by 2020. RT ↓ pic.twitter.com/6MnjeYWQAG

But the scale of opposition May faced that day, including a Facebook Live chat which attracted 13,000 ‘angry face’ emojis, was ignored on Newsnight. And that’s important. Because the perceived popularity of political candidates can influence how people choose to vote.

The BBC is doing a disservice to the public by not presenting the reality of each party’s campaign. But perhaps people have already cottoned onto that fact. And that’s why it’s losing viewers.