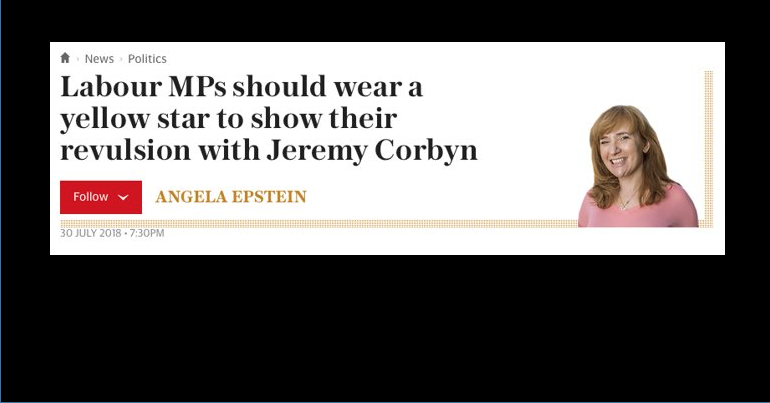 Telegraph journalist Angela Epstein has called on Jewish Labour MPs to wear the yellow star synonymous with the Nazi holocaust, in order to “show their revulsion with Jeremy Corbyn”. But past tweets and articles by Epstein raise serious doubts about her commitment to opposing racism.

In the piece, Epstein equates the prospect of a Corbyn government to the rise of Adolf Hitler. She describes the Jewish community as preparing to leave the country in fear for their lives. She argues that:

since anti-Semitism began its seemingly unstoppable march through the Labour Party, topics to chew over with the roast chicken have taken a far more embittered turn. You staying if Corbyn gets in? Unlikely (we have friends leaving almost every month). Is this really 2018 and not 1933? Yes, sadly.

She argues that Jewish Labour MPs should wear yellow stars of David, mandatory for Jews in Nazi Germany and allied states, to highlight the issue.

In  the  Daily Telegraph I write why Labour MPs need to be vocal and visible in their revulsion of Corbyn . And to embarrass him by wearing a yellow star. #labour #antisemitism #writing https://t.co/UYhmUvqKYt

But Epstein’s views on Muslims raise serious concern. In 2015, Epstein tweeted her frustration that Muslims seemed more determined to stop the rise of Donald Trump than Daesh (Isis/Isil).

It is rightly considered racist to blame the actions of the State of Israel on Jewish people around the world. The same rules must then apply to Muslims, surely? Not according to Epstein. And the logical end-point of her arguments is on full display in the comments section, which includes a number of overtly racist reactions. 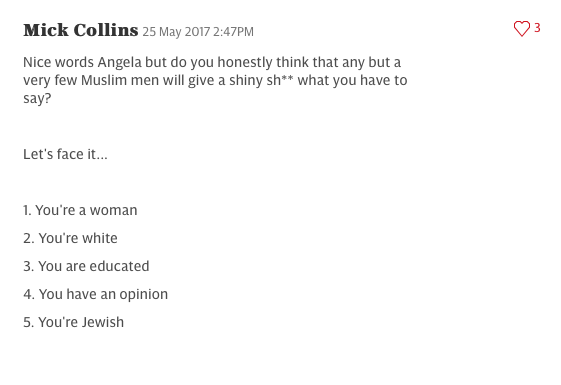 Epstein’s double standards run through conservative communities promoting the idea of a Labour antisemitism scandal. The right is advancing the racist conspiracy theory that Labour is promoting antisemitism to attract Muslim votes, assuming an inherent antisemitism among Muslims. In one such piece for the Spectator, called The Origins of Labour’s Racism Problem, Rod Liddle writes:

No action was taken against Liddle for the piece. And despite criticism from prominent Muslims and anti-racists on social media, it was crickets from the mainstream press and its pundits.

This isn't only an Islamophobic trope but also undermines the work of Muslim & Jewish groups who aim to tackle bigotry. It is a disgusting attempt to divide communitieshttps://t.co/2e29zW5guf

While advancing this conspiracy theory, the right is also ignoring requests to tackle racism in its own ranks. Conservative peer Baroness Warsi and the Muslim Council of Britain have repeatedly called for an inquiry into what Warsi describes as “weekly” instances of Islamophobia in the party. To no avail.

This contrasts with Labour holding an independent inquiry into antisemitism.

If Jeremy Corbyn can be equated to Hitler for several decades of anti-racism campaigning, then we have to wonder to whom we should compare Epstein and the Conservative Party for actively promoting racist attitudes to Muslims. Denouncing one form of racism while encouraging another is not only counterproductive, but undermines genuine attempts to reduce prejudice in all our communities.

Featured image via The Telegraph/Davey